Video-streaming giant, Netflix (NASDAQ:NFLX) has been one of the strongest equity performers during the pandemic. The company and its stock benefited from the stay-at-home...
Read more
IndiaTimes Stocks

A total of 349,974 shares changed hands on the counter till time (IST).
Read more

The Dow Jones Industrial Average and S&P 500 have been moving sideways for much of the past month, while the consolidation action in small caps and the Nasdaq 100 has been going on even longer. Concerns over inflation and, in turn, the Fed’s response – as in how soon Powell & Co would begin “tapering” their bond-buying program – have been at the forefront of investor’s collective psyches. The thinking is that if inflation runs hotter than expected (such as was seen in last week’s CPI/PPI reports), then the U.S. Central Bank will have little choice but to cut back on the current pace of bond purchases and perhaps even begin “thinking about, thinking about” raising rates.

To be sure, such a move by the Fed wouldn’t have much of an impact on the current economic recovery or the stellar state of corporate earnings. My take on history suggests that some inflation is a good thing for anyone owning a home or stocks. After all, the central bankers around the globe have been striving for some inflation for more than a decade now. And at this stage, the general consensus seems to be that the worry of “runaway inflation” is definitely not in the cards.

Then there is the argument that the current surge in inflation is being caused by factors deemed to be “transitory” (I.E., “temporary” for those not well versed in Fed-speak). So, with the economy reopening, masks coming off, a little inflation in the mix, and earnings at record levels, what’s not to like, right?

So, in looking at the market action, the question becomes: Why are we seeing a consolidation/correction?

Although one can never answer such a question without a healthy dose of hindsight, I’ve got an opinion on the subject I’d like to share this morning.

From my seat, the market appears to be trying to come to grips with three issues:

Will We See A Taper Tantrum?

So far at least, Jay Powell has made the Fed’s position clear. The Fed head continues to state publicly that his team will keep its foot on the gas until the economy returns to full employment; with or without inflation running hot for a while. As such, concerns about a coming “taper tantrum” would seem to be misguided.

However, while the Fed looks to be united in its stance at this stage, we are starting to hear some members of the committee suggest they are open to “tapering” if the current trend of inflation data continue to surprise to the upside. As such, whenever this subject hits the wires, bond yields move higher and growth stocks (particularly the group labelled “spectech” – as in, speculative technology companies) take it on the chin.

To me, this helps “esplain” some of the violent rotation that has been occurring on any given day, as well as the extreme divergence between the performance of several indices.

Next up is the idea of #GrowthSlowing. There can be no argument that the economy is really starting to hum and that the reopening phase is about to take off – especially after last week’s CDC announcement that those vaccinated don’t need to wear masks or social distance in most situations. In short, it looks like the “new normal” is close at hand. This means that even those businesses hit the hardest by the virus are about to come back online.

Yet, it is important to remember that stocks look “forward” and not back. Thus, one can argue that the majority of the good news on both the economic data and earnings fronts may be largely priced in. This would explain why so many great earnings reports – reports that include strong forward guidance – have been greeted by traders with a yawn, or oftentimes worse.

We should also keep in mind that the current growth spurt for earnings and the economy cannot continue. First, we must recognize that the current year-over-year numbers are based on a time when the economy was completely locked down. The point is that comparisons are going to get a lot tougher going forward.

In addition, the U.S. economy has clearly been “juiced” with both monetary and fiscal stimulus. Put simply, the government will stop dropping money from helicopters and the Fed will ultimately stop being ultra-friendly. As such, the “juicing” will end. So, it isn’t much of a stretch to think that the 6-7% economic growth rates seen in GDP will also end.

Therefore, the next major question the markets will likely face/deal with is, what does the “new normal” look like in terms of growth (and inflation)?

In other words, will economic/earnings growth stay strong into 2022/23 or revert to the lackluster levels seen pre-pandemic? If the former plays out, valuations will come down and stocks can go higher. But if it’s the latter, well, valuations may become a problem. On that note, I’m reminded of one of my favorite Wall Street-isms: Valuations don’t matter until they do – and then they matter a lot. Stay tuned.

Finally, there is the issue of inflation, which we largely addressed at the outset of this morning’s meandering missive. But while Powell has said that employment trumps inflation here, this could easily change looking ahead.

Just for fun, let’s fast forward six months. It’s late fall, and winter is on the horizon. The population is as fully vaccinated as its going to get. Kids are back in school. The economy is as “normal” as it will be. The Fed is talking about when to normalize. Business is good.

But a key question at this time will be if the issues causing the current inflation spike fading. Or, has inflation become “sticky” (i.e., meaningfully above the Fed’s target with no signs of abating)?

From my seat, this is likely when we need to start worrying about inflation – or not. Until then, we can expect supply chain issues, worker shortages and higher prices for lots of stuff to continue. The real question is if inflation will still be running hot in six to nine months from now. We shall see.

So, from my perch, these are the issues stocks are dealing with at the present time. And since there is a fair amount of uncertainty on all three subjects, it isn’t surprising to see a period of consolidation in the stock market.

Here’s hoping you have a great week. Now, let’s turn to our weekly model update.

We start with six of our favorite long-term market models. These models are designed to help determine the “state” of the overall market. 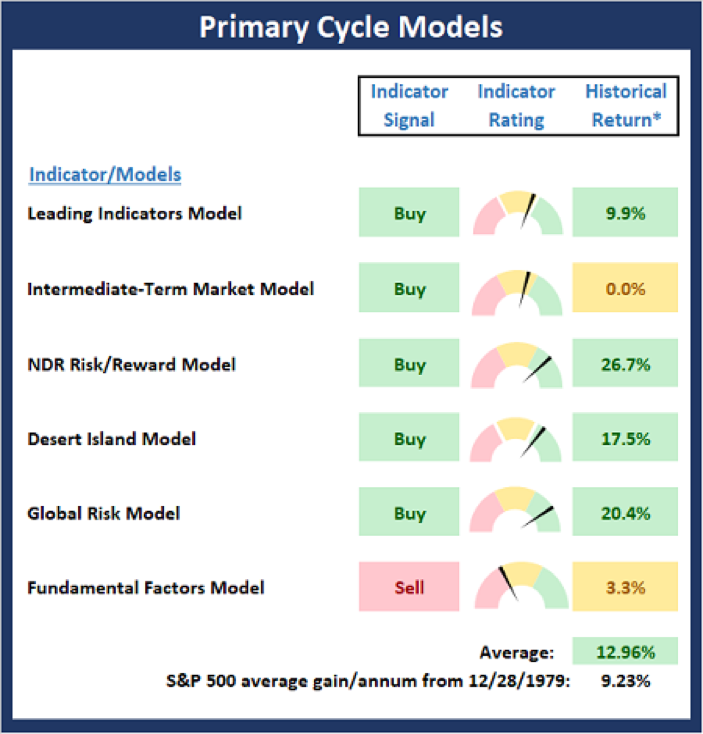 Next, we review the market’s fundamental factors, including interest rates, the economy, earnings, inflation and valuations. 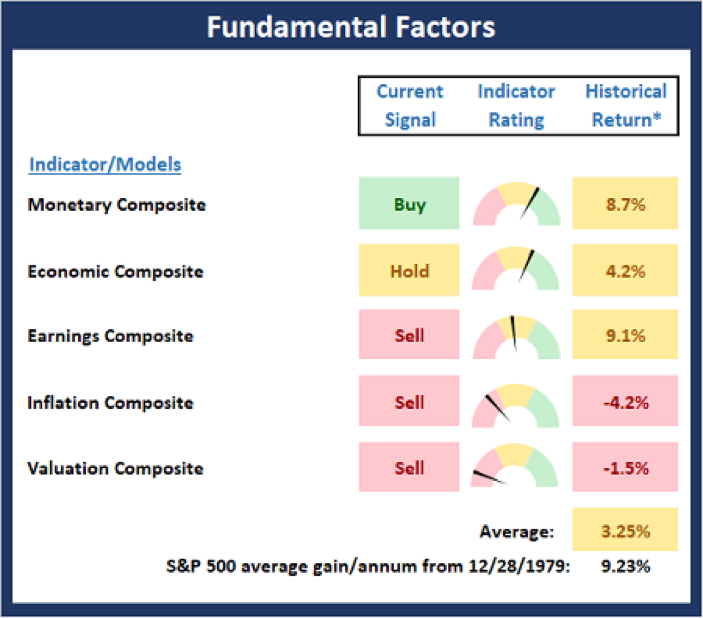 The State Of The Trend

After reviewing the big-picture models and the fundamental backdrop, I like to look at the state of the current trend. This board of indicators is designed to tell us about the overall technical health of the market’s trend. 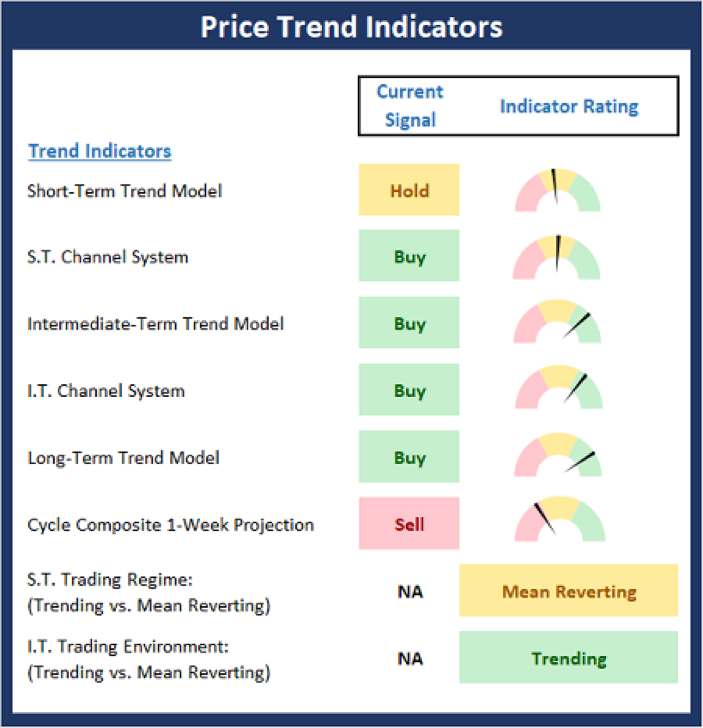 The State of Internal Momentum

Next, we analyze the momentum indicators/models to determine if there is any “oomph” behind the current move. 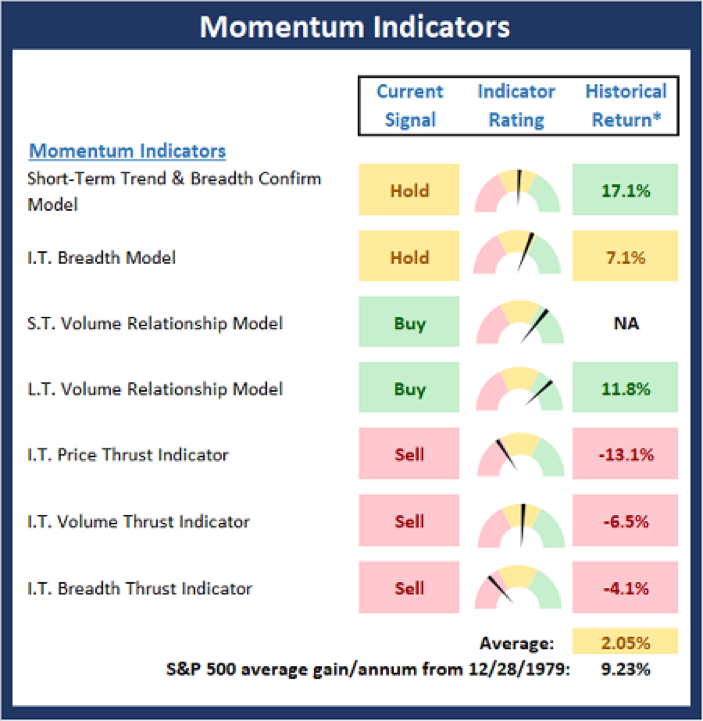 Finally, we look at our early warning indicators to gauge the potential for counter-trend moves. This batch of indicators is designed to suggest when the table is set for the trend to “go the other way.” 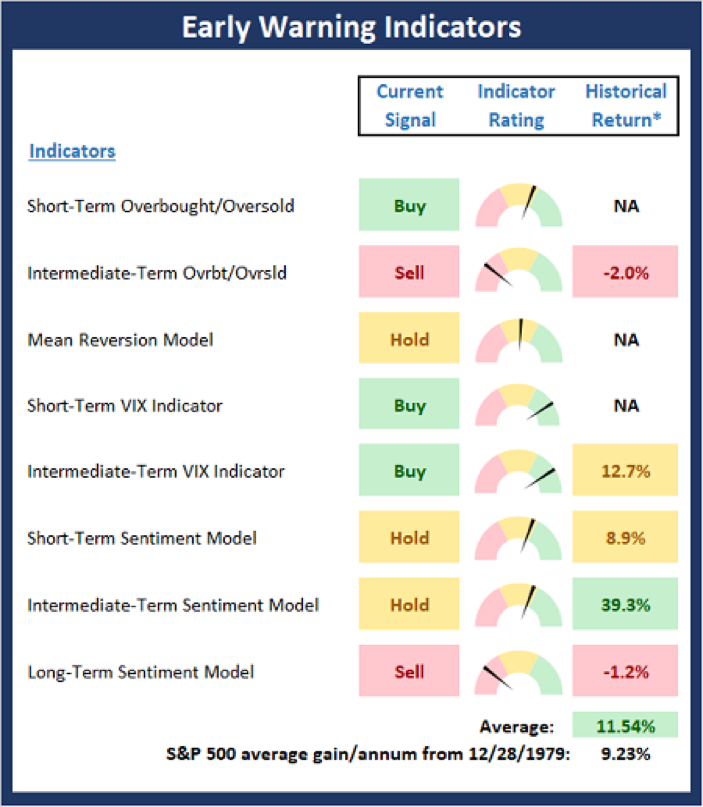 Thought for the Day:

“I have never met a man so ignorant that I could not learn something from him.”
-Galileo Galilei

Video-streaming giant, Netflix (NASDAQ:NFLX) has been one of the strongest equity performers during the pandemic. The company and its stock benefited from the stay-at-home...
Read more
IndiaTimes Stocks

A total of 349,974 shares changed hands on the counter till time (IST).
Read more
IndiaTimes Stocks

TTK Prestige Ltd., incorporated in the year 1955, is a Mid Cap company (having a market cap of Rs 12017.84 Crore) operating in Consumer...
Read more
Finance Expert

Video-streaming giant, Netflix (NASDAQ:NFLX) has been one of the strongest equity performers during the pandemic. The company and its stock benefited from the stay-at-home...
Read more