Today, June 24, marks five years since the surprise results of the UK’s Brexit referendum were released–shocking the world. When the completely unexpected ‘Leave’ majority was announced, the pound sterling dropped as much as 11%, ultimately settling a record 8% lower, a 31-year low for the Cable. Global markets as well as British betting firms had considered it a foregone conclusion that the ‘Remain’ camp would win by a landslide.

Now, after years of sometimes bruising divorce negotiations between the EU and the UK, on the fifth anniversary of the vote results, we thought it might be interesting to take a look at how the currency, and the country’s economy, have fared in the wake of that unexpected outcome.

The British economy is expected to expand 6.4% this year, the second highest level of growth among the G8 developed nations whose median growth is estimated to be just 5.4%. As well, the iShares Core FTSE 100 UCITS ETF (LON:ISF), the biggest exchange-traded fund that invests in UK assets, is enjoying record demand. Capital inflows have soared 126% since that ill-fated 2016 day, according to Bloomberg data.

It makes sense then that, according to Lloyd’s Business Barometer, economic optimism is the highest since 2016, on easing social restrictions.

So, great, right? Sterling must be a sure bet. Not so fast…there’s another, darker side to the picture.

Britain is now suffering from deteriorating productivity, shrinking global trade and no antidote for the pound’s gargantuan depreciation which is still 6% lower than its 1.4879 settlement on June 23, 2016, the day the referendum took place. It’s the worst performance among 10 major currencies since the vote occurred.

Here’s what that looks like on the broader technical chart: 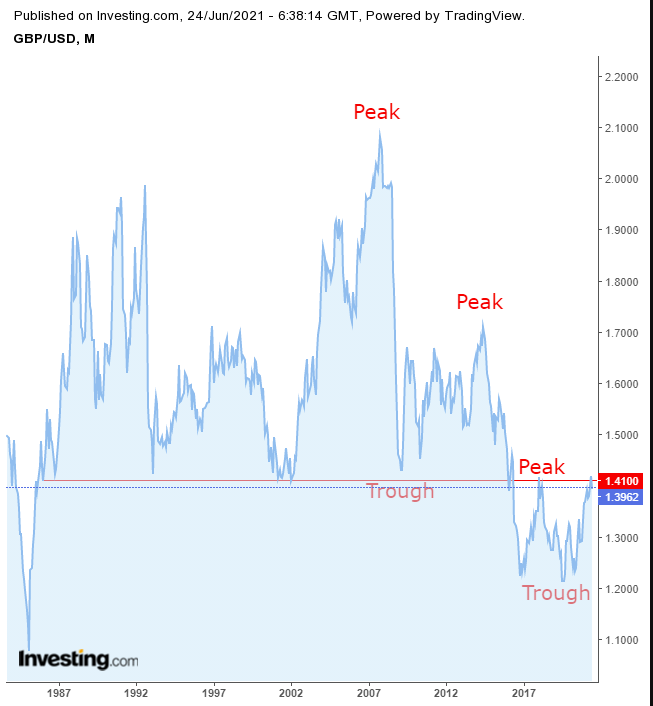 On the longer-term view, it’s clear the 1.4 level has been a solid floor since January 1986. After the pound plunged through it in the aftermath of the referendum, the currency attempted a comeback during January 2018 but was rejected.

In May of this year, sterling attempted its second return, but supply pushed it back down. The obvious, long-term peak-trough downtrend is also apparent. 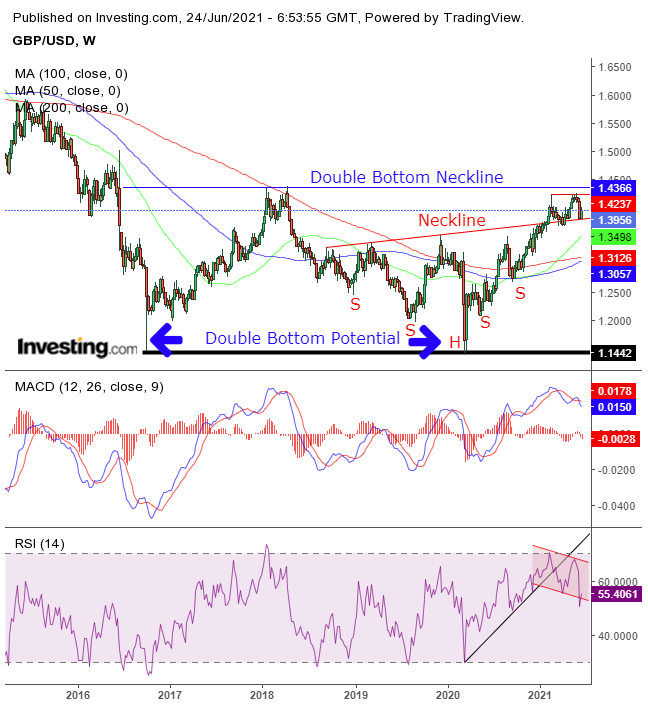 This is where it gets complicated. While the price found resistance by the April 2018 high–the previous long-term downtrend peak–the pound also completed a massive H&S bottom before that.

That could mean the decline might have been a return-move following the outsized bullish pattern. And, lo and behold, the pound found support precisely on the neckline, after jumping this week.

In addition, the 50-week MA crossed over the 200-week MA, triggering a rarely seen Weekly Golden Cross. Notice that if the H&S follows through higher, it will complete an even larger double-bottom (blue).

Having said that, and considering that these moving averages have been going sideways for the past five years, we don’t assign too much significance to the “moving” average activity in this time frame. Conversely, both the weekly MACD and RSI are providing bearish signals.

Now, let’s zoom in again, for the final resolution: 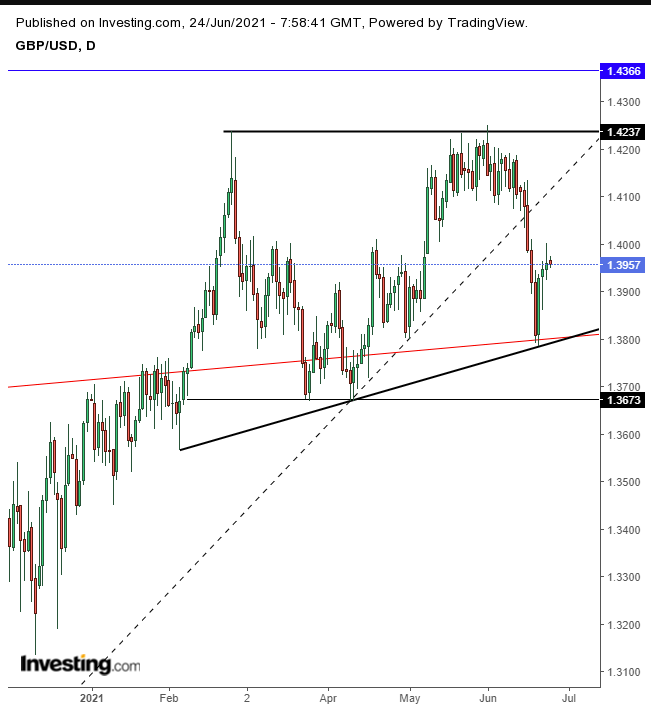 See how GBP/USD found support on the (red) neckline of the weekly H&S bottom. The price has been ranging since early February, between 1.42 and 1.36. The currency pair fell below its uptrend line since the infamous March bottom, not a good sign.

However, while that means the price has gone sideways, it doesn’t necessitate a downtrend. A reversal would be signaled if the price falls decisively below the Apr. 12 low.

Alternatively, should the weekly H&S bottom hold, the daily chart might produce an ascending triangle, shown via the thicker trendlines. Notice how the broken uptrend line meets with the top of the triangle, a likely place for resistance.

If the price scales above it, we can see a push higher. Is this the beginning of a long-term reversal? It’s too early to tell.

So, how to proceed? That depends on your risk appetite and style.

Conservative traders should wait for all trends to agree. If the price scales above the April 2018, 1.4378 level, it will have completed a long-term uptrend, agreeing with the medium and short term trends.

Moderate traders will wait for the completion of the weekly ascending triangle, confirming the massive H&S bottom.

Aggressive traders could enter a long position now, counting on the daily ascending triangle, supported by the weekly H&S bottom. However, given the price has rebounded to the middle of the pattern, they should wait for a dip toward the bottom for a more favorable risk-reward ratio.