Gold is down today, for the third session out of four. The precious metal, which earlier this month energetically burst through $2,000 is back below that level at time of writing.

As market hopes for the much-anticipated, additional US government stimulus package faded yesterday, the value of the dollar suddenly increased and yields jumped for a fourth day, scratching the underside of 0.7%. All of which has weighed on the precious metal which provides no yield.

After gold broke record after record last week, we’ve been warning that profit-taking would surely follow, but the realization that markets had already priced in more stimulus funding–which was no longer rapidly forthcoming–added fuel to the fire sale. 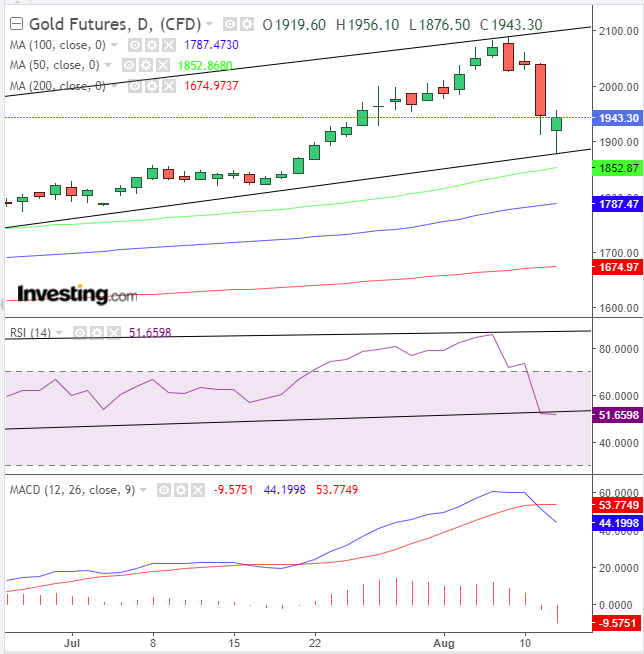 As we began researching this post, gold was deep in the red, at session lows. However, the fact that the price reached the bottom of its rising channel caught our attention. Like a charm, at time of writing, it bounced off it, potentially forming an imperfect hammer (with a superfluous upper shadow).

Even after todays’ rebound, the selloff since Friday remains the worst since the March bottom.

While the bounce off the bottom of a rising channel, with a potential hammer to boot, is promising for gold bulls, caution is advised. Both the RSI and MACD triggered sell signals, though the RSI is curving back upward and looks to be climbing back into its rising channel, should the price of yellow metal rise a bit more.

At this point, we’re encouraged that gold bounced right off the bottom of its channel and uptrend line, confirming its technical significance.

Conservative traders would join if today’s candle proves to be a proper hammer, with no upper shadow. Then, they might risk a long position if the price retests the hammer and rising channel bottoms.

Moderate traders might risk a long position even with some upper shadow, but are likely to wait for the price to dip, for a better entry.

Aggressive traders may go long at will, provided they’ve worked out their trade plan which should suit their budget, character and timing.