This article was written exclusively for Investing.com

Renewed weakness in the dollar, dovish central banks during the week, and stronger data from China at the start of the week has resulted in some of the key commodities trading higher. But after a strong 5-month rally, gold and silver prices have understandably been in consolidation mode for much of September.

However, is the grey precious metal gearing up for another breakout?

The Federal Reserve, Bank of Japan and Bank of England all signalled the need to keep their respective monetary policy stances extraordinary loose for the next few years as the global economy tries to recover from the impact of the coronavirus pandemic, which is showing no signs of easing as reported global cases top 30 million.

Central banks are also trying to offset any weakness that may arise from uncertainty relating to, for example, Brexit and the upcoming US Presidential election, as well as other risks such as deteriorating relations between the US and China.

With these central banks suggesting that bond buying and zero interest rates will be here for the foreseeable future, debt yields have been held back. Theoretically, this should help to maintain the appetite for non-interest-bearing commodities, like gold and silver.

Crucially for silver and other buck-denominated metals, the US dollar seems to have resumed lower. The Dollar Index is now down on the week, having started positively, following a two-week rebound. And haven currencies like the yen rallying this week, is an additional bullish factor to take into account.

Meanwhile, as mentioned, some commodity prices have resumed higher this week, suggesting that gold and silver could follow suit. Among the commodities that have shown relative strength is copper, which hit a fresh high on the year today, reaching its best level since June 2018. Crude prices have also roared back this week after their sharp two-week falls.

However, not all commodities have enjoyed a good week, with natural gas for example slumping on excessive supply and weak demand concerns. But if copper is anything to go by, then silver–which like the brown metal has many industrial uses–may also climb to a new high for the year soon.

On the technical front, silver formed a juicy-looking hammer candle on its daily chart on Thursday after finding good support at $26.30 and once again held above the 21-day exponential moving average: 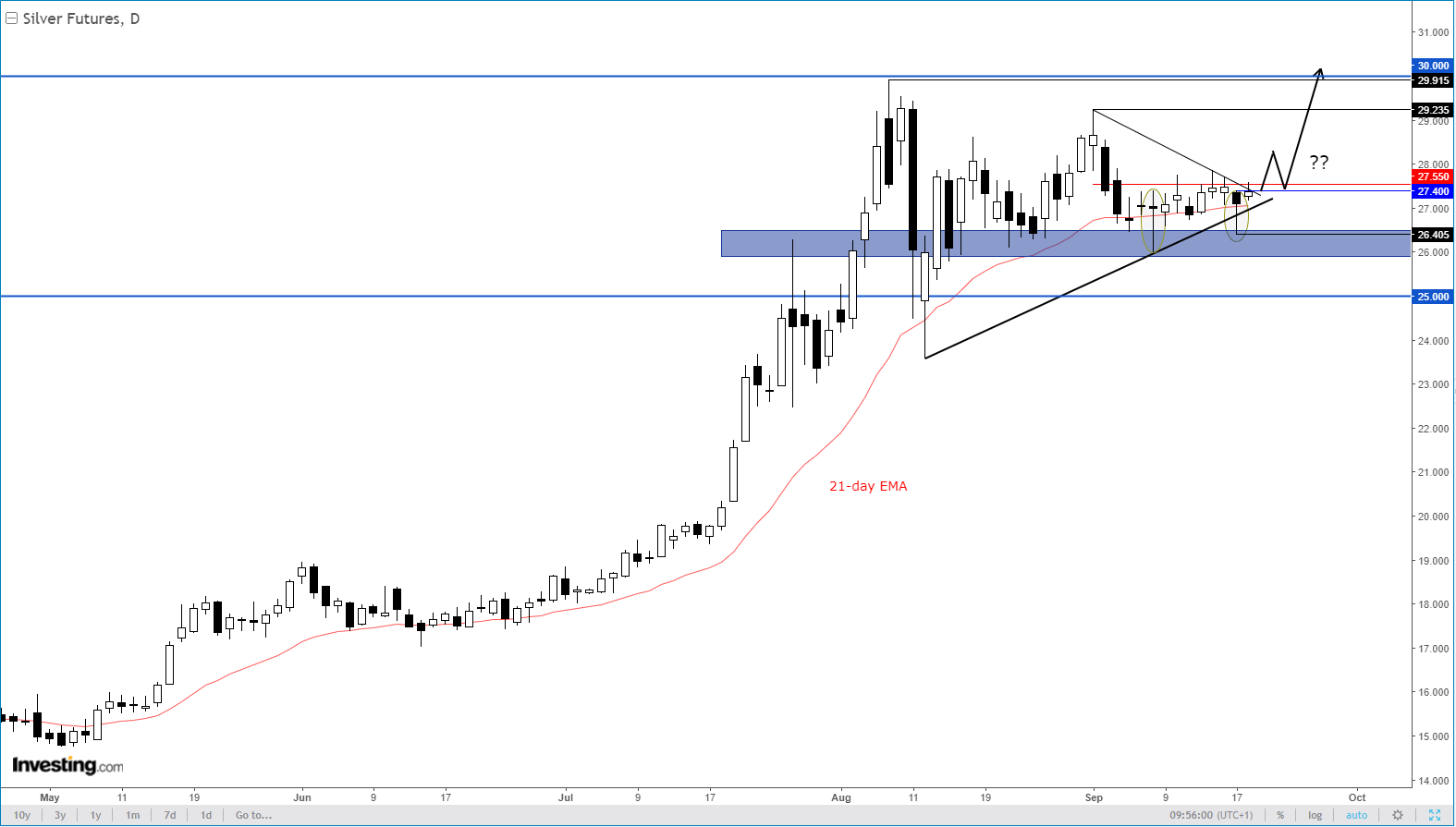 Silver has not gone back below the 21-day EMA on a daily closing basis since its huge breakout back in May. This moving average should therefore be watched closely, by silver bulls and bears alike. The 21-day average is quite useful in objectively determining the direction of the short-term trend. With silver continuing to hold above it, the path of least resistance thus objectively remains to the upside until it is broken conclusively.

With that in mind, if silver can rise and hold above its short-term bear trend and resistance in the $27.40-27.55 range, then this could pave the way for a run towards the old highs around $29.24 and then $29.92. The main objective would be the psychologically-important $30 handle, which happens to come in just above this year’s high.

However, if the 21-day exponential gives way on a closing basis, or silver closes below its bullish trend line first, then in this scenario the short-term bullish bias would be invalidated. As such, we could see a pullback to at least $25 before silver decides on its next move. However, this is the alternative scenario and not my base case.