Chart Of The Day: U.S. Dollar Heading For Another Leg Lower

Nuvve vs. Blink: Which EV Charging Stock is a Better Buy?

Sign In/Free Sign Up 0 Cryptocurrency12 minutes ago (Apr 22, 2021 09:30AM ET) Constellation Disrupts Blockchain With Revolutionary Tokenomics Have you ever wondered what's the...
Read more
Investing News

Government bond yields have continued to edge higher throughout 2021 amid concerns over a large supply of government bonds and inflation.
Read more

In 2017 we wrote a series of posts after China announced it was launching a yuan-based oil futures market. At that time we said the effort was as much about the renminbi competing with the US dollar‘s position as the global reserve currency as it was about the Asian nation wishing to influence the oil market from its position as the world’s largest energy importer.

At that time we predicted that China, Russia and Iran might form an alliance to de-throne king dollar, in an effort to reduce the US’s influence on the world stage. Though that hasn’t exactly come to pass, yet, there have been reports recently about a China / Russia financial alliance to circumvent the USD. Of course, these accounts have mostly been coming from China and Russia, but the American media has also covered it.

As well, last month, China and Iran signed a massive $400 billion, economic deal, part of which will include the effort to “bypass American financial systems, and reduce the power of the dollar.”

Still, markets aren’t expecting those efforts to unseat the greenback from its status as the world’s premier currency.

However, in late July, economist and former Morgan Stanley Asia chairman, Stephen Roach, cited another reason the dollar could be in danger, an “unbelievably abysmal performance in addressing the coronavirus relative to other nations.” He noted that the USD could fall as much as 35%.

Hedge funds too have become more bearish on the USD and increased short positions accordingly, but they’re betting on the euro. 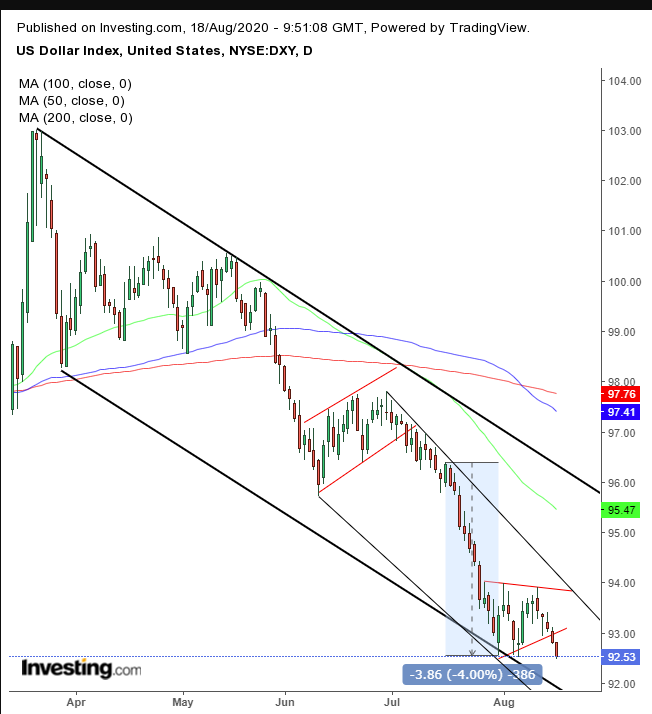 On July 23, our intitial target of 94.75 for the Dollar Index was hit. Now, we’re calling another leg down.

That move will take on the long-term uptrend line since April 2011 and the 90.00 psychological round number. These technical pressure-points are crucial. If they hold, they could possibly return the dollar to its March highs of 103. If they fail, we could see a much deeper drop.

For now, the dollar completed a pennant, bearish after the 4% plunge in just 11 sessions. Today, bears extended the downside breakout, demonstrating that they’re willing to lower their offers to find new, willing buyers, at lower prices.

This desperation tends to form a chain reaction, pushing prices further lower. The implied target is the sharp price move, before the tug-of-war between buyers and sellers that formed the pennant, ending with bears extending the falling channel since the March high.

Conservative traders might want to wait for the price to fall below the 90.00 key level, which would include clearing the long-term uptrend line.

Moderate traders may short the dollar upon a return to the pennant or the top of its narrower falling channel since the June Rising Flag.

Aggressive traders may short now, provided they understand that at the bottom of a falling channel since March, there is always the possibility of a return to its top.

Note: This is just a sample, not an actual trade or analysis, which is in the post itself. If you don’t understand the dynamics and its risks, do not trade. This sample can fail, even if the overall analysis is correct. That’s where money management comes in – and it must be tailored to your budget, your temperament and your timing.

If you don’t know how to write a trading plan accordingly, consider any trade you make nothing more than a learning experience.

Nuvve vs. Blink: Which EV Charging Stock is a Better Buy?

Sign In/Free Sign Up 0 Cryptocurrency12 minutes ago (Apr 22, 2021 09:30AM ET) Constellation Disrupts Blockchain With Revolutionary Tokenomics Have you ever wondered what's the...
Read more
Investing News

Government bond yields have continued to edge higher throughout 2021 amid concerns over a large supply of government bonds and inflation.
Read more
Investing News

Government bond yields have continued to edge higher throughout 2021 amid concerns over a large supply of government bonds and inflation.
Read more
IndiaTimes Stocks

The Nasdaq-100 Micro Index was launched in January and is 1/100th the size the Nasdaq 100 Index, which includes 100 of the largest non-financial...
Read more