President Donald Trump’s politically well-timed announcement of a blood plasma treatment option for the coronavirus has lifted stock markets and bought the dollar some reprieve ahead of a dour evaluation of the US economy expected from the Federal Reserve this week. The net outcome for gold and oil investors, however, is a little more uncertainty.

Prices of the shiny metal and crude were slightly lower in Asia as trading for the new week began amid the US Food & Drug Administration’s “emergency use authorization” of blood plasma from recovered patients as a treatment option for COVID-19.

The announcement came on the eve of the Republican National Convention, where Trump will be nominated to lead his party for four more years. The president last week accused “deep state” elements within the FDA of trying to delay progress on vaccines and therapeutics until after November 3rd, US Election Day.

Risk Aversion Still On The Table

The Trump administration is also considering by-passing normal US regulatory standards to fast-track an experimental coronavirus vaccine from the UK for use in America ahead of the election, the Financial Times reported. Still, European hotspots for the virus saw new spikes last week, with Spain having 6,671 cases, France 3,776 and Germany over 1,500–all the most in a day, on Wednesday.

“The authorized emergency use of convalescent plasma could be considered as the latest push to the commodity bears,” said Anil Panchal at FX Street.

“However, the strong bounce-back of the virus in Germany, France and Spain keeps the risk aversion on the table.” 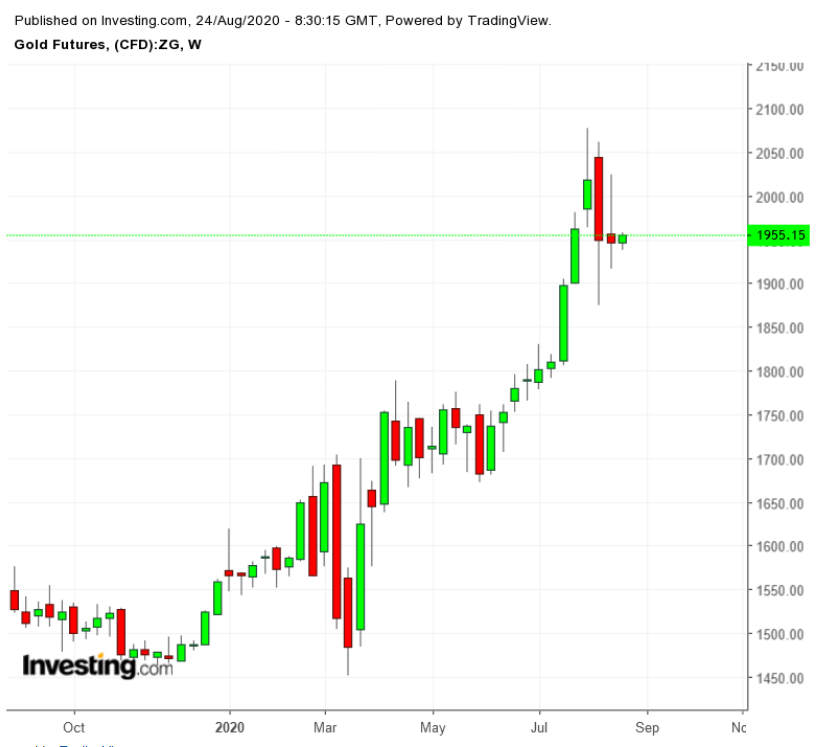 West Texas Intermediate, the benchmark for US crude futures, as well as Brent, the bellwether for global oil, were barely changed. 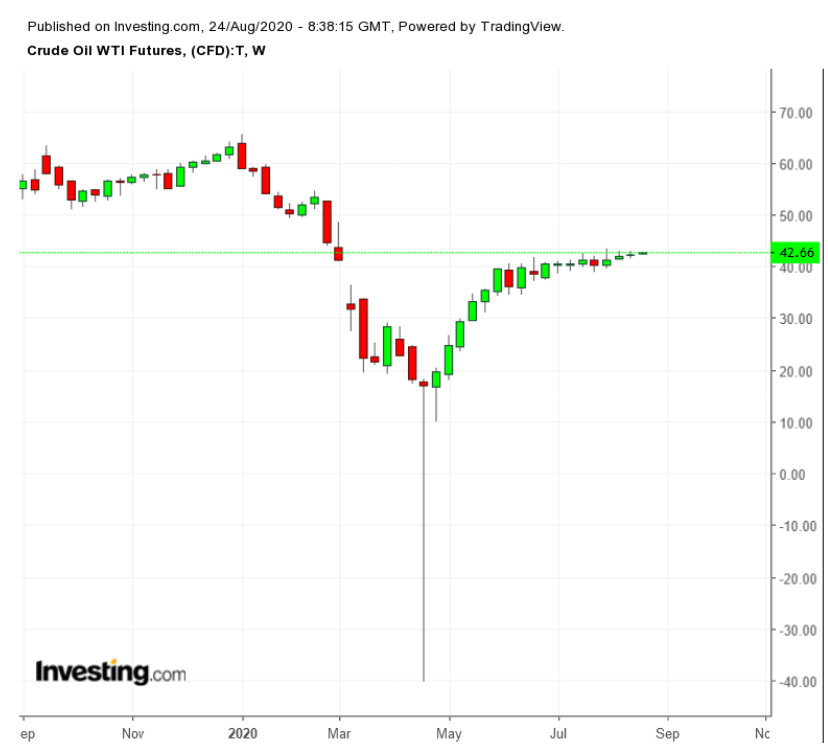 Yet, traders could be more wary of what the Fed could say in days ahead.

The central bank’s annual “Jackson Hole, Wyoming” symposium on Thursday and Friday–being held virtually for the first time in four decades due to the pandemic–will see Chairman Jay Powell deliver the Monetary Policy Framework Review that should double-down on its pledge for ultra-low rates and more currency debasement.

A major question, particularly ahead of the Fed’s September policy meeting, is whether the Fed will shift its inflation targets to an average, which would allow inflation to run higher before interest rates are raised.

Investors may also be on the lookout for signs that the Fed is looking at additional ways to bolster the economy should Congress fail to deliver a new pandemic relief package.

“If Powell confirms the bank will be moving to some form of average inflation targeting regime, it would prove risk positive and dollar negative,” Eamonn Sheridan said, posting on ForexLive.

The benchmark yield from the US Treasury’s 10-year note has been heading lower for most of the past two months and forex traders had been hoping the Fed would keep it that way by subjecting controls on the instrument.

But when the Fed’s minutes for its July meeting, released Wednesday, showed the central bank had balked at the idea of yield curve controls, it gave forex traders an excuse to drive the Dollar Index higher. This is in spite of the trillions of dollars of stimulus issued by the US Congress, and the central bank’s vow to keep ballooning its balance-sheet to support a pandemic-struck economy.

While US new home sales and PMI data were supportive of the greenback on Friday, the Dollar Index’s continued stay at the 93 handle baffles many analysts who expected a range of below 92.5 as fair value.

Too Many Risks To Abandon Gold

Gold hit record highs of nearly $2,090 on Aug. 7 before two sharp selloffs over the past two weeks set it on a more volatile path.

“The best thing for gold right now will be if the economic recovery continues but is not too robust, thus cementing the need for more fiscal and monetary stimulus,” said Ed Moya, analyst at OANDA in New York. “Too many risks to the outlook remain for anyone to abandon the gold trade.”

As for oil, a double-digit rise in the US rig count last week may have added a new layer of concern that crude drillers in the world’s largest producing country were raising output despite a questionable demand outlook amid the coronavirus pandemic.

First Double-Digit Rig Rise In More Than A Year

Rigs actively drilling for oil in the United States stood at 183 last week, versus the previous week’s all-time low of 172, oil services firm Baker Hughes said in its routine survey.

Baker Hughes had not reported a single oil rig addition since February, even before the coronavirus outbreak in the United States which decimated demand for energy. It has been more than a year since there was a double-digit rise in rigs.

The surge in rigs suggests that US oil drillers were getting comfortable with crude prices at around $40 per barrel.

History has shown that rig additions, once they begin, can quickly rise in shale oil patches. The result typically is higher production than the market can bear, a phenomenon that ultimately weighs on crude prices.

The US oil rig count stood as high as 1,606 in 2014, triggering a price crash that took crude to around $25 per barrel two years later from previous highs above $100.

Union Bank of India to raise Rs 1,750 cr through QIP