Is copper near $3 a lb something that’s here to stay?

In a coronavirus world, the answer will depend on who’s working: the factory employee or the miner.

In a global mining outlook released Friday, Fitch Solutions wrote that production of copper ore, along with that of tin, will face the greatest COVID-19-induced reductions through 2020–due to the concentration of such mining projects in Asia and the Americas, where the virus was seeing a revival.

For instance, copper output in Peru, the third largest producing country, fell by 20.4% through the first half of the year, said Fitch Solutions, a unit of global credit rating group Fitch.

“Governments in Colombia, Chile and Brazil have allowed mining activities to continue with some health measures, such as reducing the number of personnel on site.”

The three countries, all in South America, are among the top 10 coronavirus hotspots of the world, with Brazil coming in at number two just after the United States with 3.6 million cases, Colombia stands at number eight with over 550,000 cases and Chile in the tenth position with just under 400,000 cases.

A scaledown of mine work in these major minerals nations will help keep copper near last week’s highs, when it pierced the $3 per lb ceiling on New York’s COMEX the first time since June 2018. 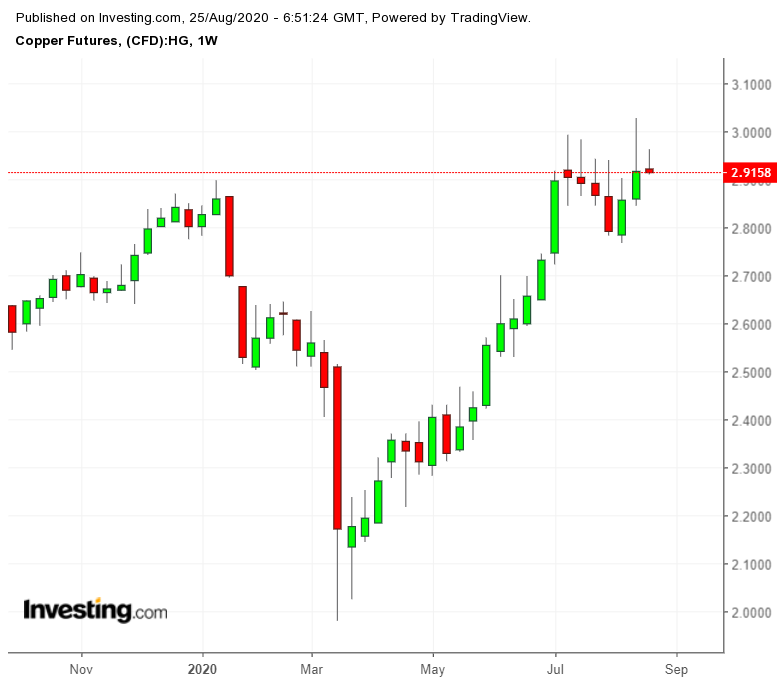 But there’s another coronavirus “impact story” unfolding in metals, one involving demand. And here’s where there’s a lack of clarity on copper prices.

In the most simplistic sense, when factories or industries at large aren’t working at their normal pace, it means a slowdown in demand for products and resources, including raw materials such as copper.

Ron Hall of resourceworld.com wrote in a recent blog that the two-year high in copper prices came on the back of surging Chinese demand and supply disruptions.

“Demand is now outstripping supply reflected in a decline in treatment and refining charges,” he wrote.

“Treatment and refining charges paid by miners to smelters have fallen to an eight-year low, a sign of competition between refiners for available concentrates.”

But Hall said it was also debatable if the pace of demand could be retained through the third and fourth quarters.

“The recovery may not be sustainable and the risk of a second COVID-19 wave — especially in the U.S. and China, the world’s two biggest consumers — may force downward pressure on copper prices during the coming quarter.”

“There’s a whole slew of the population out there that is either furloughed, is losing their job or doesn’t know what’s going to happen to their job, so the risk is that they’re not going to be going out into the market buying some of the big ticket items that contain copper.”

“So there’s a concern that whilst demand should, in theory, pick up, it may not pick up to the degree that we expect because people aren’t going to go out there and buy a new car or a new washing machine.”

Joannides explained this was in spite of Wood McKenzie forecasting stronger demand for copper in the second half of this year as economies and industries restarted.

According to Fitch Solutions, widespread restrictions primarily in Latin American countries, which began in March and started to be lifted in May, have weighed on its copper mine production forecast for 2020.

“We now forecast global copper mine output to contract by 2.6% year-on-year,” the agency stated.

“Among metals, we expect copper and tin to register the greatest output declines in 2020, and this is largely due to the mining of these metals being concentrated in the highest impacted regions, Asia and the Americas.”

Fitch Solutions said it expected copper mining to pick up in the second half of 2020, but added that the recovery will likely be capped.

“Some miners have already begun to lower output expectations for the remainder of 2020 as they grapple with implementing health safety measures.”

Theoretically, copper prices are supposed to be in consonance with the economy. For years, analysts had watched the metal on the belief that it will indicate an economic boom by rallying ahead–a faith misplaced somewhat by the terrible misalignment between the two in recent years.

The U.S. Food and Drug Administration on Monday approved a blood plasma treatment for the COVID-19. The Trump administration was also reported to be at work in trying to bring to market a UK-developed vaccine for the virus before November’s presidential election.

While such efforts could boost hopes for a quicker economic rebound, the outlook for copper prices remains unclear for now.

Previous articleWhat happens if Japan’s Abe is incapacitated, or resigns?
Next articleJapan stocks higher at close of trade; Nikkei 225 up 1.35%
- Advertisement -