Correction Or Reversal? Cast Your Votes

Charlie Lee weighs in on the recent NFT craze

The bears pushed hard on Friday, but couldn’t close near the daily lows. Has the bid returned? And the correction now over? Given Friday’s lower knot and Monday’s upswing, it might seem so. How does today’s premarket downswing fit in the picture then?

But the key thing is that the bull is alive and well. As long as money will keep being redeployed into other stocks from those that take it on the chin during any correction (such as tech stocks during this one), the bull is far from a top.

That’s the power of rotation, as money moves from red-hot tech into value plays (with financials perhaps also springing to life at one point – when if not now as yields are rising).

Let’s move to the charts. 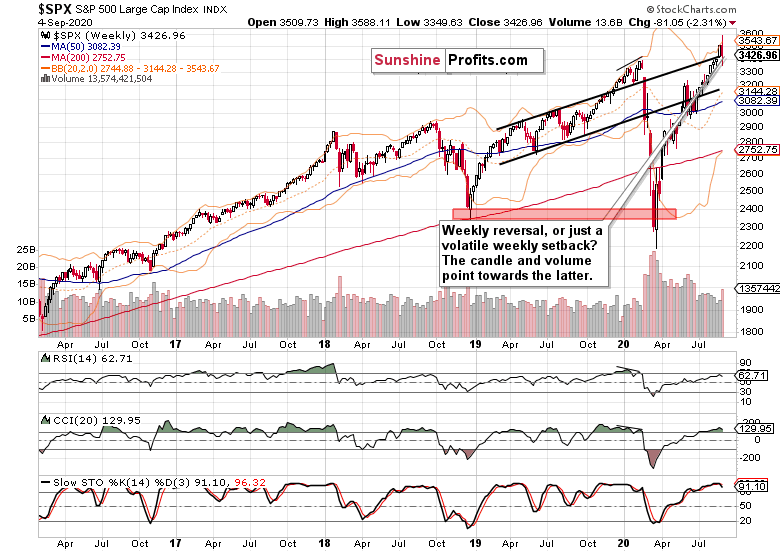 After breaking above the upper border of the rising black trend channel still in August, stock prices retraced that move all the way back. On increasing volume, the bears even pierced this level, but were rebuffed. 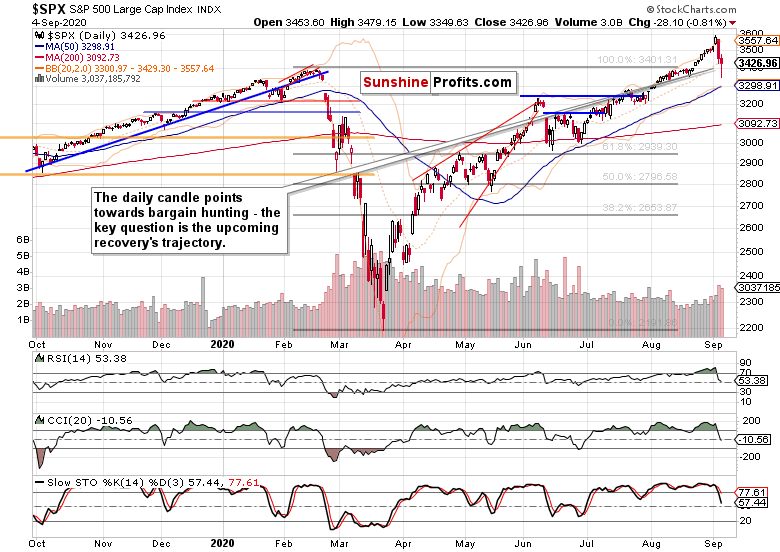 The daily chart appears constructive for the buyers in the short run. On rising volume, much of the downswing was erased, paving the way for the bulls to try their luck next. But I still see the bears as likely to return over the next few session, offering the bulls a better entry point than was the case at the very end of Monday (3440).

Such were my thoughts Friday’s on the upswing attempt:

… the bulls will have to prove that it wouldn’t turn out as a dead-cat bounce.

The Credit Markets’ Point Of View

Stocks were not alone in seeing buyers step in – high-yield corporate bonds (HYG ETF (NYSE:HYG)) did so too. But its lower knot could have been arguably longer, given the S&P 500 performance. Notably, investment grade corporate bonds (LQD ETF (NYSE:LQD)) didn’t recover during Friday’s session at all.

These factors point to a relative indecision in the credit markets as these are unwilling to jump the gun.

Of course, with the anticipated arrival of the October correction, that will change, but chop with a slightly bullish bias looks as the most probable scenario for September. 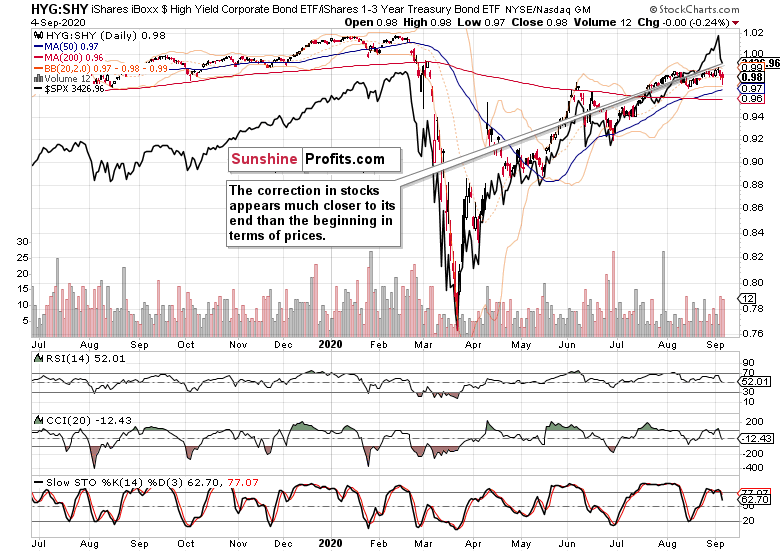 Small caps (IWM ETF (NYSE:IWM)) mirrored the S&P 500 resiliency, and likewise erased much of the downswing. No sign of distribution here – and while underperforming, the Russell 2000 doesn’t disprove the stock bull run. 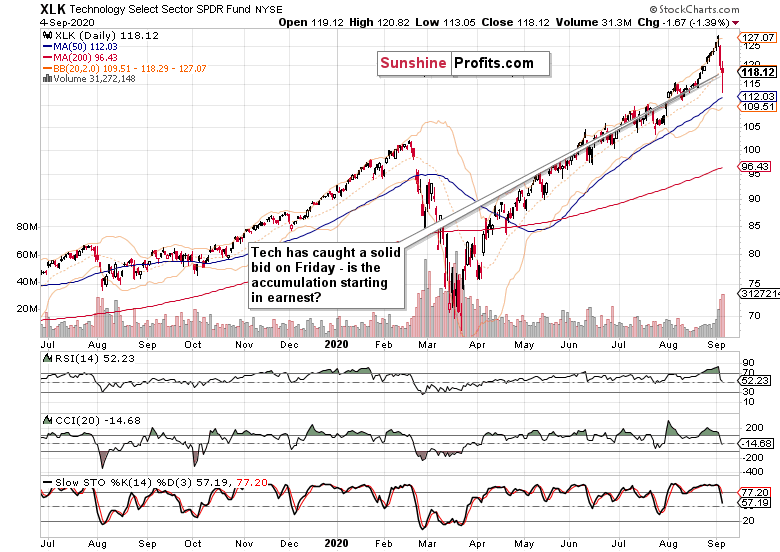 Technology (XLK ETF) strongly rebounded off the deep intraday lows, and the volume shows the extent of the bulls’ commitment. The sectoral correction has been healthy, and I expect tech to go on a slow recovery over the coming days and weeks. 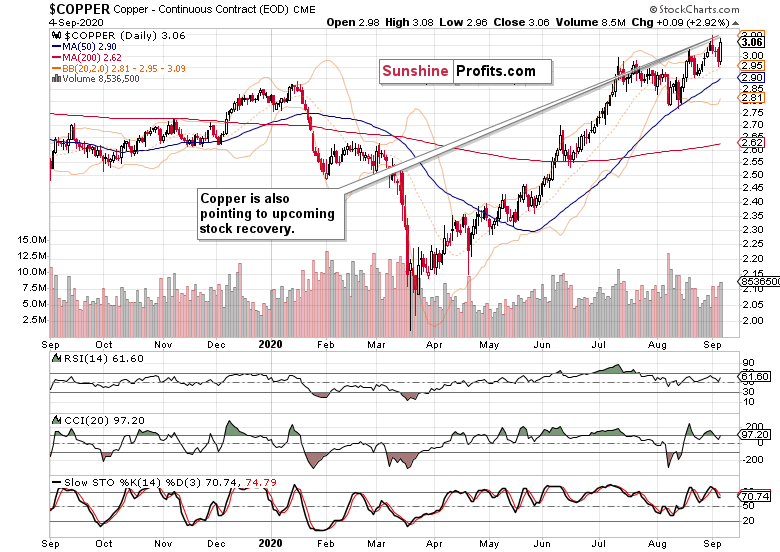 Copper continues its own grind higher, and its chart is bullish. That points to the economy being in a recovery, however slow and uneven that is.

Finally, gold remains in its bullish consolidation, and it’s my opinion that it would attempt to extend the early summer gains once the floor in the U.S. dollar probes lower values again. This might take time though, as I look for USDX to spike higher first – quite a few bullish divergences have formed there, and will likely play out over the coming weeks.

Given the weakening oil, that would be little surprising, and actually fitting the October correction hypothesis. No markets go up or down in a straight line, and neither the dollar nor the yellow metal, are an exception.

Summing up, the bulls’ complacency was shaken to the core, and the extreme greed sentiment readings are history. The put/call ratio has barely budged, which is hinting at the correction likely having a bit longer to run, at least in terms of time. The advance-decline line has ticked higher, pointing to a likely upswing attempt right next – and we saw that yesterday. The weekly advance-decline line though could still have a way to go before reaching the June extremes – but this can wait for October to happen.

The key takeaway is that we have seen a sharp correction, and not a reversal. In such circumstances, trading decisions remain a question of the risk-reward ratio, and one’s willingness to let the dust settle for a moment first.

All essays, research and information found above represent analyses and opinions of Monica Kingsley and Sunshine Profits’ associates only. As such, it may prove wrong and be subject to change without notice. Opinions and analyses were based on data available to authors of respective essays at the time of writing. Although the information provided above is based on careful research and sources that are believed to be accurate, Monica Kingsley and her associates do not guarantee the accuracy or thoroughness of the data or information reported. The opinions published above are neither an offer nor a recommendation to purchase or sell any securities. Ms. Kingsley is not a Registered Securities Advisor. By reading Monica Kingsley’s reports you fully agree that she will not be held responsible or liable for any decisions you make regarding any information provided in these reports. Investing, trading and speculation in any financial markets may involve high risk of loss. Monica Kingsley, Sunshine Profits’ employees and affiliates as well as members of their families may have a short or long position in any securities, including those mentioned in any of the reports or essays, and may make additional purchases and/or sales of those securities without notice.

Previous articleChart Of The Day: Will The ECB Actually Be Able To Devalue The Euro?
Next articleMcConnell Aims for Vote on Senate Republican Stimulus This Week
- Advertisement -

Charlie Lee weighs in on the recent NFT craze

Is Apple Heading For A Big Fall?

To come straight to the point, I think Apple (NASDAQ:AAPL) is heading for a big fall, with a target price at the price gap...
Read more
IndiaTimes Stocks

MUMBAI: State-owned Bharat Petroleum Corporation (BPCL) is likely to sell up to 8.68 crore shares, or 4 per cent of the company equity, through...
Read more