CPI rises again in July. But will the inflation dragon take to the air, taking gold with it?

The U.S. CPI inflation rate rose 0.6 percent in July, for the second month in a row. The move was driven to a large extent by higher energy prices (the energy index increased 5.1 percent in June as the gasoline index rose 12.3 percent). The core CPI rose also 0.6 percent, following a 0.1 percent drop in May. It was the biggest monthly increase in the core rate since 1991.

On an annual basis, the overall CPI increased 1 percent (seasonally adjusted), following 0.7 percent increase in June. Meanwhile, the core CPI rose 1.6 percent, which implies the acceleration from 1.2 percent recorded in the previous month. So, as the chart below shows, inflation remains low, but it is no longer very low. 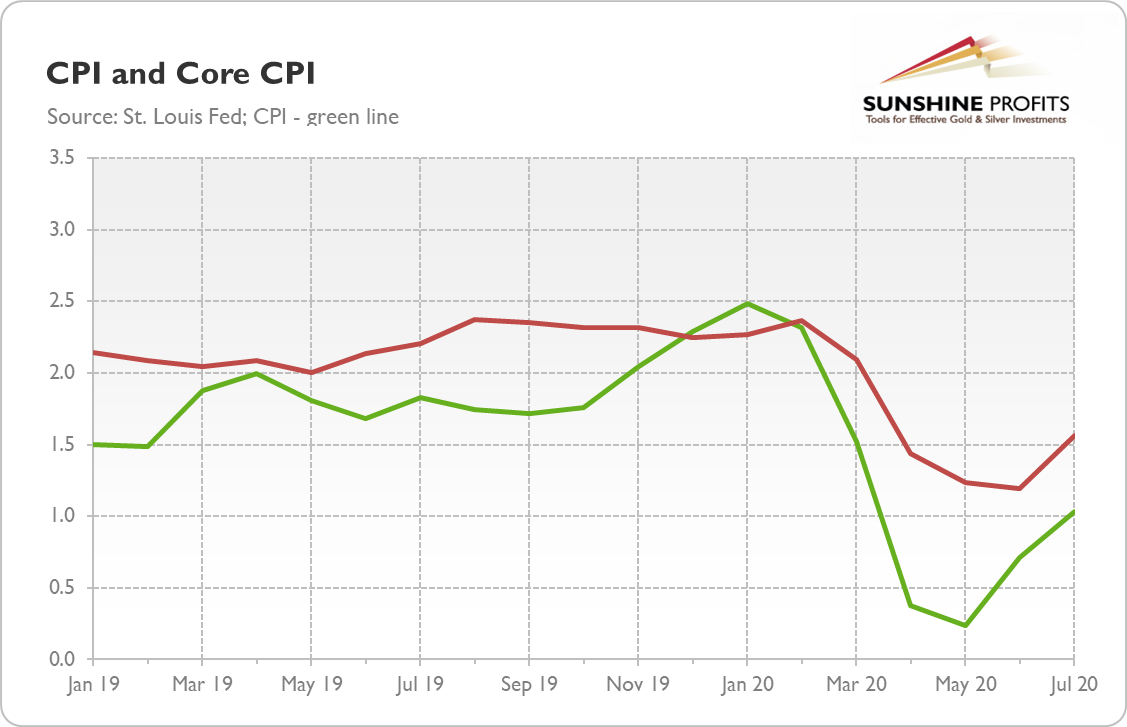 But will inflation finally rear its ugly head? Where is the inflation we predicted? Nowhere. But we never predicted that the pandemic of Covid-19 would trigger massive inflation. What we wrote was that the coronavirus crisis could be simply more inflationary than the Great Recession, as the former was also a supply shock. And we were right, as the chart below shows. 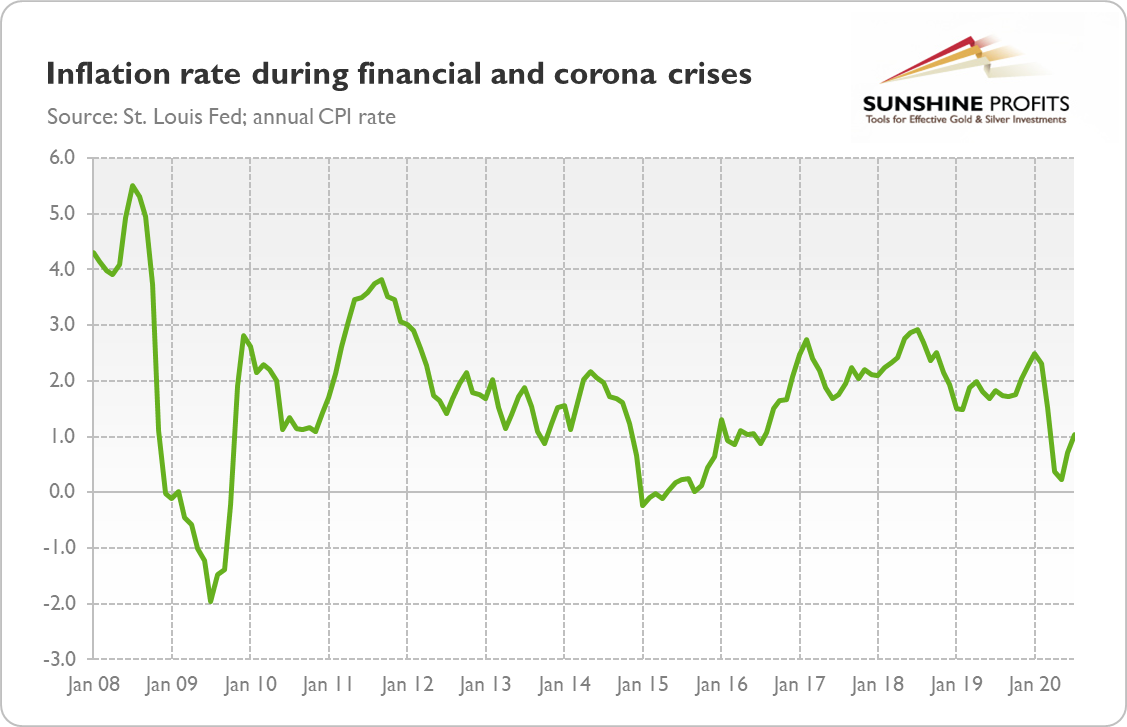 And indeed, the disinflation occurred, but inflation has rebounded somewhat recently, which raises the odds of stagflationary scenario. There are a few reasons while inflation could increase later on the way. First, the economy will recover one day, which means that the demand will be back. Second, high and rising public debts increases the possibility that the central banks will monetize the government’s obligations. After all, inflation is often the best way to lower the real burden of sovereign debt. Third, both the Fed and the commercial banks have expanded the money supply as crazy, as one can see in the chart below. To be clear, I do not mean the monetary base which does not necessarily enters the circulation, but the broad measure of the money supply called the M2. 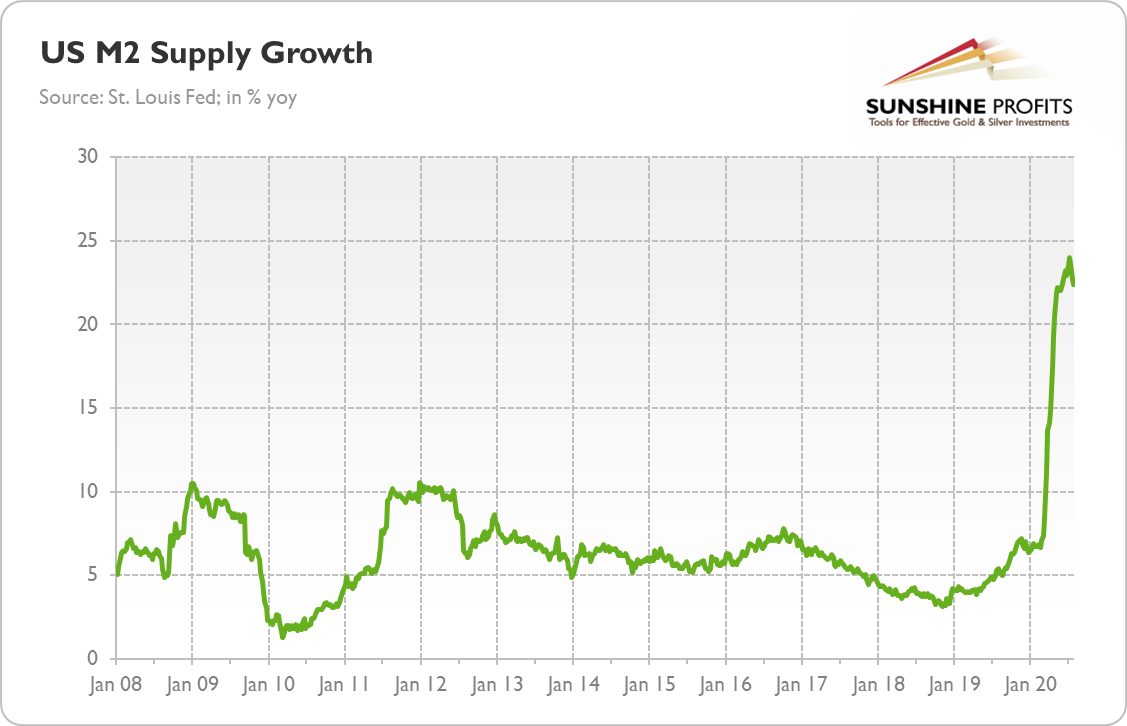 Last but not least, the American central bank is now even more dovish that during the global financial crisis. I mean here two facts. The first is that the quantitative easing is now a new normal and it has an indefinite character compared to amount-limited or time-limited rounds several years ago. The second is that the FOMC members are now much more eager to accept zero interest rates for very long period and inflation rate above the Fed’s target. As Fed Chair Jerome Powell said during his July press conference, the American central bankers are not even thinking about ending the very easy monetary policy:

So as I–as I said earlier, or a while back, we’re not even thinking about–thinking about raising rates. We’re–we’re totally focused on providing the economy the support that it will need. We think that the economy will need highly accommodative monetary policy and the use of our tools for an extended period.

What does it all mean for the gold market? Well, it’s true that low inflation does not have to be detrimental for gold, as the yellow metal can shine during both inflation and deflations. And that although inflation rebounded somewhat, it is far from being elevated. Actually, it remains below the Fed’s target and pre-recession level.

However, the two last CPI reports suggest that the inflationary bottom could be already behind us and that inflation could rise in the future. Even if it does not happen, what really counts is what Mr. Market expects. As the chart below shows, inflationary expectations have practically rebounded after the coronavirus crisis. 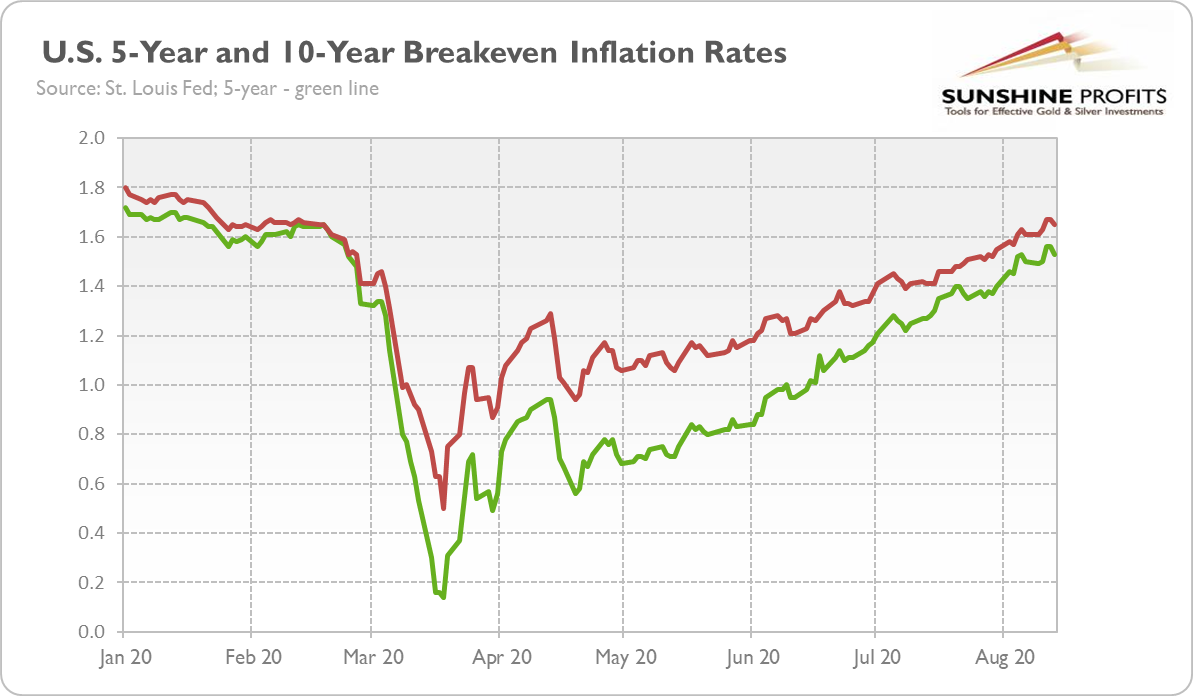 This indicates that investors – rightly or not – worry that mammoth injections of liquidity will translate into higher inflation one day. This is something that creates additional demand for gold as an inflation hedge, supporting its prices.

Disclaimer: Please note that the aim of the above analysis is to discuss the likely long-term impact of the featured phenomenon on the price of gold and this analysis does not indicate (nor does it aim to do so) whether gold is likely to move higher or lower in the short- or medium term. In order to determine the latter, many additional factors need to be considered (i.e. sentiment, chart patterns, cycles, indicators, ratios, self-similar patterns and more) and we are taking them into account (and discussing the short- and medium-term outlook) in our Gold & Silver Trading Alerts.