Crude Oil Down More Than 10% In Past Week

Trading crude oil and looking for another significant move to the up or downside had been like watching paint dry since June. The decline to an all-time low in NYMEX WTI futures and the lowest price of this century in Brent futures gave way to a recovery that took the price of the energy commodity to over the $40-per-barrel level. Nearby NYMEX futures first reached $40 in early June. Since then, the market had gone into a volatility coma, but the price settled below the level at the end of last week.

Bullish and bearish factors are pulling the price of the energy commodity in opposite directions as of Sept. 4. Demand remains a critical concern, but production declines have gone a long way to balance the petroleum market’s fundamental equation. While the trend remains higher, crude oil tends to take the stairs higher and an elevator shaft to the downside over time.

WTI Falls Through Bottom End Of Its Trading Range

Crude oil took an elevator shaft to the downside earlier this year before recovering to over $40 per barrel. The bullish trend was in question at the end of last week.

The ascent of the energy commodity had been a slow crawl to the upside, but the decline below $40 on the back of weakness in the U.S. stock market led to a test of technical support at $39, the double-bottom low, which failed to hold.

As the daily chart of NYMEX October crude oil futures highlights, the price settled at the $39.77 per barrel level at the end of last week. On Tuesday, Sept. 8, the price was trading around the $36.30 level. The total number of open long and short positions has been flatlining at around the two million contract level over the past two months. The correction from the Aug. 26 high of $43.78 caused price momentum and relative strength indicators to fall below neutral readings to oversold conditions.

The mid-point over the past two months is at $41.39 per barrel. The price moved below the lows in a short-term technical breakdown in the energy commodity.

On the final day of August, Brent futures on the Intercontinental Exchange rolled from October to November. Brent is the pricing mechanism for approximately two-thirds of the world’s crude oil, including the petroleum from the Middle East. The region is home to over half the world’s crude oil reserves. 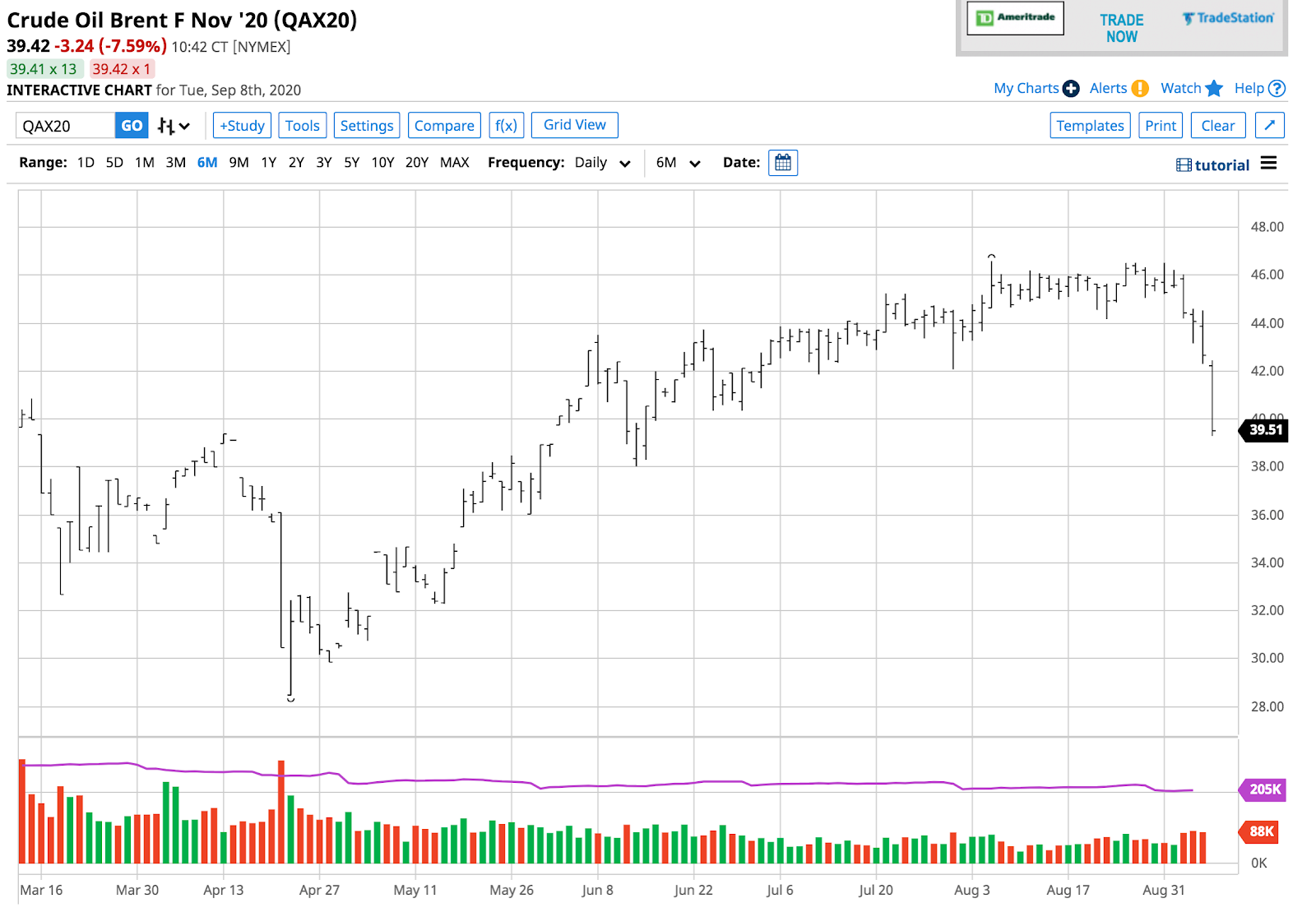 The chart shows that Brent futures have traded in a range from $40.35 to $46.59 since late June. The trend in the Brent futures was higher, with a midpoint at $43.47. However, at below $40 on Sept. 8, Brent futures fell through the bottom end of the band over the past two months. Brent and WTI futures crawled higher, as fundamentals were supportive of the price. The correction in the stock market caused a return of the elevator ride lower at the start of this week.

Crude oil never away on the upside after reaching the $40 per barrel level. The memory of the price carnage on the downside that led to the April low of a negative price for WTI and the lowest price of this century for Brent continues to weigh on the price action.

On the bullish side of the oil market, production and inventories have been highly supportive over the past weeks. OPEC, Russia and other producers continue to maintain a 7.7 million barrel per day cut, after tapering the level from 9.7 mbpd in August. U.S. output has dropped, with the Energy Information Administration reporting 9.7 mbpd for the week ending on Aug. 28.

The level of U.S. production declined 26% from record high level in March 2020. In the latest report, the EIA said production fell by 1.1 mbpd. The decline was because of hurricane Laura’s impact on petroleum production in the states on the Gulf of Mexico.

At the same time, the American Petroleum Institute and Energy Information Administration reported the sixth straight week of falling inventories for the week ending on Aug. 28.

The inventory data in the U.S. continues to support the price of crude oil futures though they fell below the $40 per barrel at the end of last week on the NYMEX October futures contract. The November Brent futures at under $40 have some support from the decline in OPEC, Russian, and other producers’ output.

Crude oil’s bullish trend turned lower over the recent sessions. The memories of the decline that took prices to lows in April and concerns over demand continue to prevent the price from moving appreciably higher. Crude oil was heading for a test of the mid-June $35.25 per barrel level on October NYMEX futures, the mid-June low. A move below there could open the floodgates on the downside.

The settlement at the lowest price since June 26 on the October WTI futures contract was a warning sign for the energy commodity last week. On Tuesday, it followed through on the downside, rekindling fears that another period of price carnage could be on the horizon.