Despite the United States Federal Reserve injecting $120 billion of Quantitative Easing (QE) into the financial markets monthly, the Dow Jones Industrial Average has not made any progress since early May. See figure 1 below. This “stalling” tells me the Elliott Waves (EWP) are still unfolding because otherwise, the index should have risen accordingly, assuming the FED’s QE program is what only drives the markets, and it is not. Investor sentiment plays a huge role, and the EWP tracks this mass sentiment, which moves in a relatively predictable manner. Allow me to explain below. 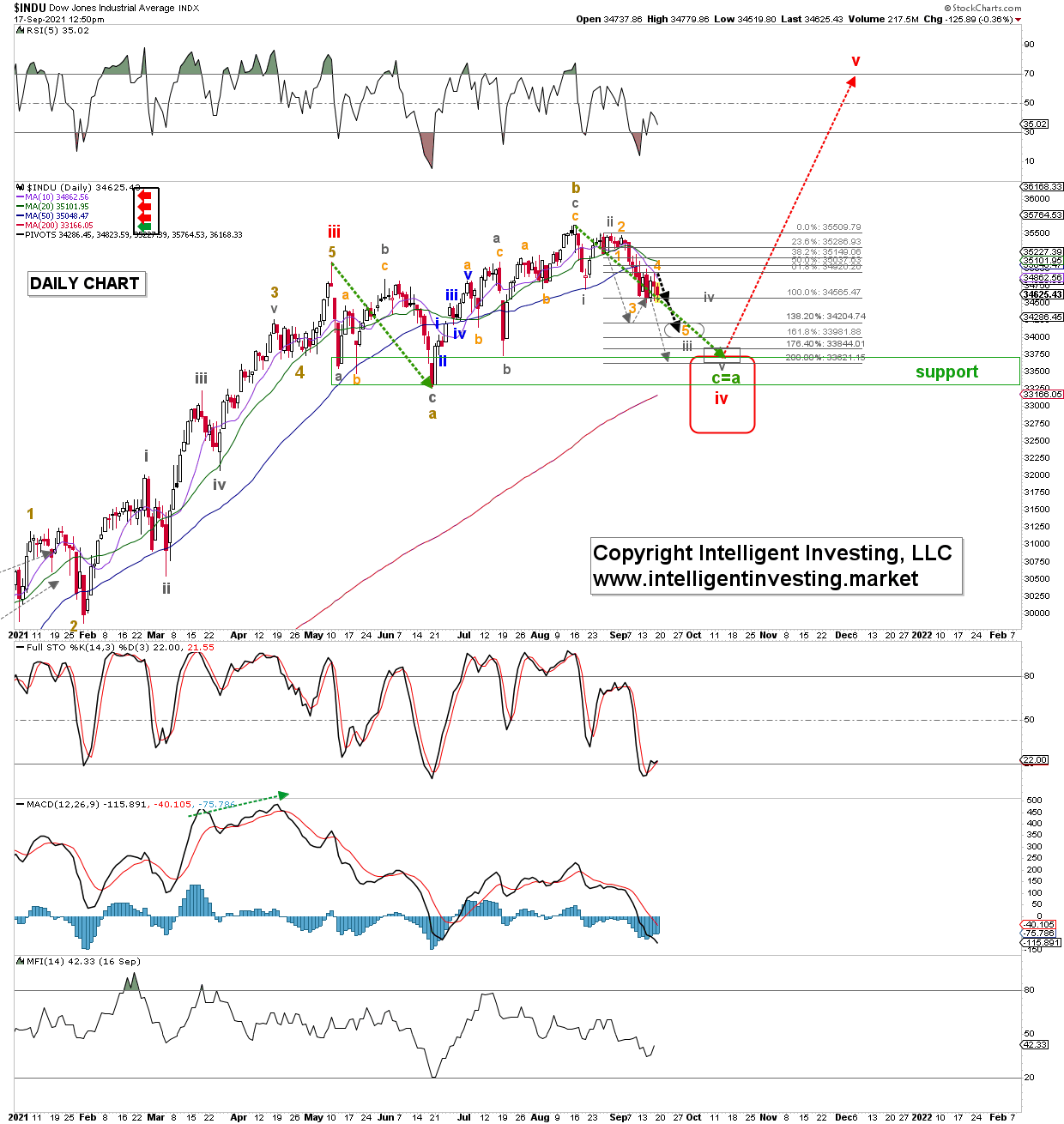 The DJIA should now be in a subdividing c-wave lower to complete a complex correction.

Since the May 10 top at $35,092, the DJIA has essentially moved sideways, whereas its advance to the marginally higher high on Aug. 16 at $35,631 was in an overlapping fashion. This pattern tells me that since the May high, the index has most likely been in what is called, in EWP-terms, and irregular flat 4th wave. Such a pattern consists of, in this case, three waves down for (green) wave-a, three waves back up for (green) wave-b, and the five waves down for (green) wave-c. This pattern has several variations depending on how high the b-wave travels and how low the c-wave goes. For example, in a regular flat, a=b=c, whereas in an irregular flat, b>a=c. Let’s apply this pattern to the index. See Figure 1 above.

Besides, at the 33811 level the index completes an excellent (green) c=a relationship (green dotted arrows). Note the grey dotted arrows, which are the path I anticipated for my major markets trading members since late August. It exemplifies the wave-iii, iv, v pattern as described here. So far, this has transpired and I, therefore, see no reason to change my point of view.

Thus, although the whipsawing between 34,520 and 34,945 over the last week may cause some short-term confusion, a break down below 34,520 targets around 34,095, based on simple symmetry (dotted black arrows in Figure 1). The breakdown aligns well with the ideal wave-iii target zone of 33,970-34,205. The index will have to close above its 50-day simple moving average (d SMA) from around current levels to suggest that the EWP pattern described here is wrong. Please note “the traffic light”: the price is below the 10-day, 20-day and 50-day SMA and only above the 200-day SMA. Thus, the light is 3/4th red, and caution is advised to the long side until it turns back to green.

Biocon shares down 5.77% as Nifty drops

Biocon shares down 5.77% as Nifty drops