ECB Preview: Could It Cut Rates? No Way

It's been frustrating several months for the gold (GLD) bulls, and the past month hasn't been any easier. This is because we had incessant...
Read more
Investing News

The European Central Bank’s monetary policy announcement is the most important event risk this week. Based on the persistent weakness of the euro, investors are bracing for ECB dovishness. According to the rates markets, ECB dated Euro Overnight Index Averages, or Eonias, are pricing in a 10bp rate cut in 2021. Could the central bank lower interest rates next year? Possibly. But a rate cut this week is certainly not on the table. The only scenario where the central bank could lower interest rates over the next three to six months would be if there is a full-blown second wave of coronavirus and everyone returns to hard lockdowns and the markets crash 20% to 30%. These scenarios are possible, and some market watchers would assign it greater than 50% probability, but until they transpire, the ECB will save its ammunition.

With that said, President Christine Lagarde has every reason to be dovish. Europe is in the midst of a second wave; Brexit talks are breaking down, posing a threat to the entire region; the euro is strong, growth is moderating and inflation is weak. The second quarter was a rough one for the Eurozone and while Q3 will look better from almost every angle (except inflation), the risk of a correction in the markets and virus cases hampering economic activity makes it hard to trust that the improvements in August PMIs are durable.

Given the Federal Reserve’s recent change to its inflation strategy, investors will be looking to see if the ECB tweaks its policy guidance. Low inflation is a bigger problem in Europe than the U.S. German year-over-year CPI is flat, the Eurozone CPI estimate is negative and core inflation hit a record low of 0.4% year over year in August. This decline could force the central bank to lower its inflation forecasts and suggests that its 1.35-trillion euro PEPP is a target not a ceiling. The euro rebounded on Wednesday on reports that the central bank could show more confidence in its economic outlook, which would be a reference to GDP and not inflation. Following ECB Chief Economist Philip Lane’s comment that the euro/dollar rate does matter, we are looking for Lagarde to express the same frustration. If we are right, and the ECB lowers its inflation forecast and suggests more action in December, EUR/USD could tumble to 1.1650. However, if no major changes are made, EUR/USD could find its way back above 1.1850. 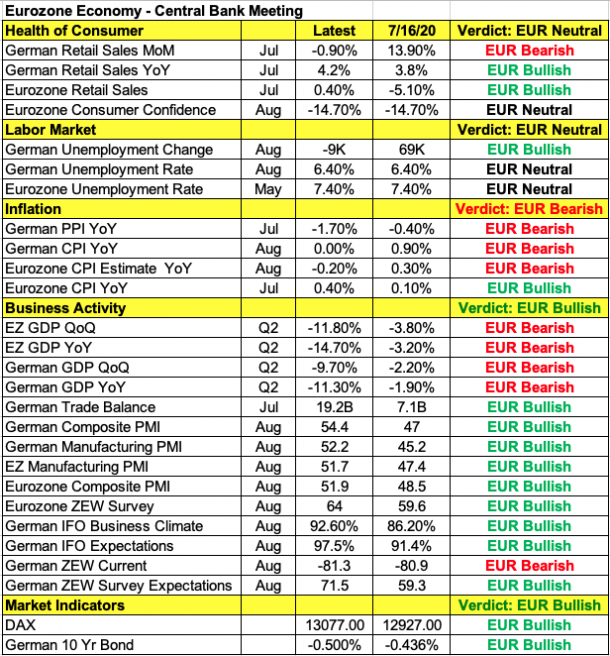 The rebound in U.S. stocks and Treasury yields helped USD/JPY find its way back above 106. The pair has been trading in a very narrow 105.80 to 106.55 range for the past week with headlines and equity market flows being the only potential catalysts for a breakout. Given our expectation for further stock market correction, we think the rally in USD/JPY will be limited. Producer prices are scheduled for release tomorrow and while the uptick in the prices paid component of ISM manufacturing signals stronger inflation, investors will shrug off any improvements after the Fed’s decision to alter its inflation strategy.

The Canadian dollar traded higher following the Bank of Canada’s monetary policy announcement. As expected, the BoC left interest rates unchanged and said the economy is recovering as expected. Like other major central banks, it believes ongoing policy accommodation is needed because it expects “this strong reopening phase to be followed by a protracted and uneven recuperation phase, which will be heavily reliant on policy support. Monetary policy is working to support household spending and business investment by making borrowing more affordable.”

The Australian and New Zealand dollars traded higher on the back of stronger data. In Australia, home loans rose 8.9%, which was more than four times better than expected. Consumer confidence also rebounded sharply in September despite the lockdown in Victoria. In New Zealand, the ANZ business confidence index rose to -26 from -41.8. Sterling, on the other hand, extended its slide after the UK government expressed its intensions to breach the Withdrawal Agreement by overriding parts of the Northern Ireland protocol.

It's been frustrating several months for the gold (GLD) bulls, and the past month hasn't been any easier. This is because we had incessant...
Read more
Investing News

Robinhood now a go-to for young investors and short sellers

NEW DELHI: YES Bank on Tuesday said its shareholders have approved a proposal for raising Rs 10,000 crore capital with the requisite majority. As many...
Read more
IndiaTimes Stocks