We have to be in the crypto space, Mastercard CEO says

Sign In/Free Sign Up 0 Cryptocurrency23 minutes ago (Jul 31, 2021 07:20AM ET) We have to be in the crypto space, Mastercard CEO says Traditional...
Read more
Valor Economico News 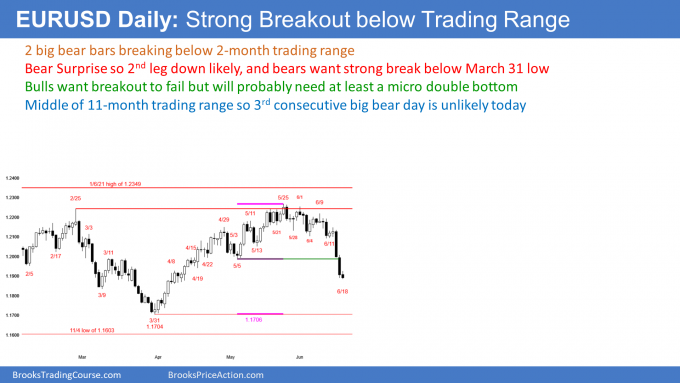 – EUR/USD is turning down from a lower high major trend reversal on the weekly chart. It is also the right shoulder of a head-and-shoulders top.

– Breakout below the May 5 low at the bottom of a two-month trading range. But, the EUR/USD is still in the middle of the 11-month range.

– Yesterday was the second consecutive big bear day. It increased the chance of lower prices next week.

– A third consecutive big bear day closing near its low would be unusual within a trading range. The bears are likely exhausted, and many will take some profits soon. Bull scalpers will also begin to buy today, looking for a brief bounce.

– Yesterday’s close was far below the May 5 low at the bottom of the two-month trading range. That increases the chance of lower prices over the next week.

– However, there is often a bounce back up to the breakout point. Therefore, the EUR/USD might test the May 5 low within the next few days.

– The bulls want the bear breakout to fail. If they get a bull bar closing near its high today, many bears will exit above its high.

– Since a second leg sideways to down is likely, even if today is a bull day, traders will sell a one- to three-day bounce.

– Trading range overnight, but fell below yesterday’s low in a strong series of bear bars.

– Starting to bounce over past five minutes. Bears might be taking some profits after two-day sell climax.

– Bears hope this 30-minute selloff will be the start of another big bear day. It will more likely attract profit-takers.

– If it is a bull day, it probably will not be a huge bull day.

– The most common thing after an extreme climax is a trading range. Day traders will probably buy reversals up from selloffs and sell reversals down from rallies, and take quick profits.

– If there is a series of strong trend bars in either direction, they will swing trade. Most likely, the bears will use selloffs to take some profits, so big bear day unlikely.

– After two huge bear days, big bull day is unlikely, but the profit-taking (short covering) could be strong.

We have to be in the crypto space, Mastercard CEO says

Sign In/Free Sign Up 0 Cryptocurrency23 minutes ago (Jul 31, 2021 07:20AM ET) We have to be in the crypto space, Mastercard CEO says Traditional...
Read more
Valor Economico News

MUMBAI: Housing Development Finance Corporation is likely to report a 6.4 per cent year-on-year decline in net profit to Rs. 2,856 crore for the...
Read more