Denmark stocks higher at close of trade; OMX Copenhagen 20 up 0.04%

3 Great Home Improvement Stocks for 2021 and Beyond

The Federal Reserve’s adoption of an average inflation target pushed on a door in the foreign exchange market that was already open. The dollar had been trending lower since the end of March and, as of the end of August, was down against all the major currencies this year, save the New Zealand and Canadian dollars.

The real broad trade-weighted dollar is arguably the best measure of metric to gauge the economic impact. At the end of August, it stood at 108.09 after finishing 2019 at 107.05. It had peaked in April near 113.40, an 18-year high incidentally.

Neither the FOMC statement, Powell’s comments, or subsequent official remarks have specified a period by which the average rate of inflation will be observed. The Fed’s Vice-Chair Clarida seemed to play down the need to adopt new tools. Even Brainard’s comments seemed to be more geared at the Fed refraining from action (e.g., preemptive rate hike) than a fresh policy tool for the new framework.

Nevertheless, the Fed’s confirmation that it would tolerate inflation for some unspecified period by an unpsecified amount above 2% provided fresh fuel to the dollar bears. The greenback was sold to new lows for the year against most of the major currencies. Sterling approached $1.35 and the Australian dollar pressed through $0.7400. The dollar versus the Swiss franc tested CHF0.9000 and briefly traded below CAD1.3000. Gold was reaching again for that $2000-mark. The euro poked above $1.20, its average since the launch in 1990. It had not been this high since May 2018.

As this was taking place on September 1, the ECB’s Chief Economist Lane commented that although the ECB does not target the exchange rate, the euro-dollar rate matters. It is not clear if, given the key levels, profit-taking was going to set inm in any event, but Lane’s comments helped frame the correction that quickly turned into a rout. A short squeeze lifted the dollar back into its previous ranges that had been threatened.

A few hours before Lane spoke, the preliminary August eurozone CPI was reported. It was weaker than expected. At minus 0.2%, it was the first deflationary reading since 2106. The core rate fell to a lowly 0.4% from 1.2% and is a new record low. The strength of the euro only aggravates the situation, says the conventional wisdom, and raises the obvious question if Lane’s comments were shot across the bow. The ECB is engaged in its own review of its policy framework. It seems considerably less bothered than Fed officials about the role of monetary policy in addressing social or racial inequality. ECB President Lagarde does embrace “green bonds,” and Germany (and Sweden) launched their first green bonds last week (10-year maturities).

The ECB’s staff will update its forecasts. There can be no doubt the lowly CPI reading was unsettling, but it is not the like it was surprising to the staff. Recall that its last forecast, made in June, was that headline CPI would average 0.3% this year. It averaged 0.7% in H1, and now with the August reading, the average for this year so far is 0.5%. And those inflation figures are not clean in the sense that there are statistical distortions and noise from pandemic-related decisions. If the staff shaves its 2022 inflation target by a tenth or two of a percent from 1.3%, as some suggest, it can hardly be attributed to some short-term appreciation of the euro. 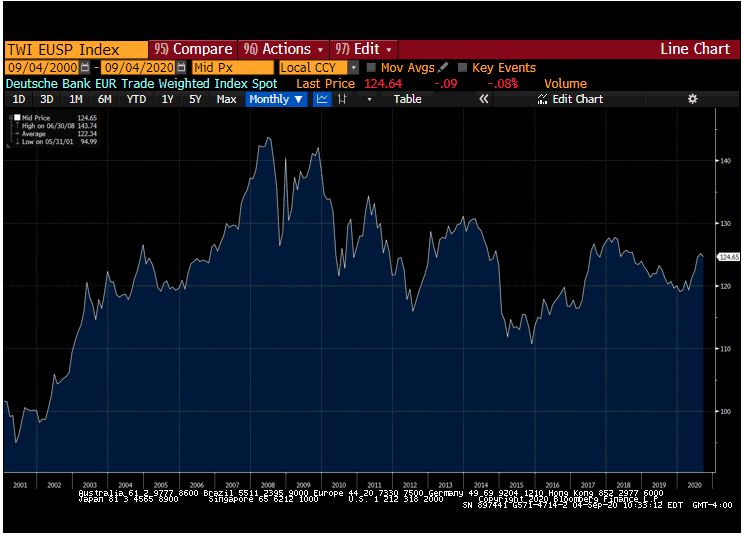 The Financial Times reported that several ECB officials are worried about the euro’s appreciation. First, consider who would talk to reporters, off the record, risk a scandal if word got out. Those that have won or are winning some internal fight have no reason. They won. More often than not, such leaks and clandestine sources are on the losing side. It is not a question of the morality of the leaks, but a question of interests that are served. The German member of the executive board, Schnabel spoke on the record at the start of last week and played down the significance of the recent price action, but noted that “if there is a depreciation of the US dollar, it tends to boost global trade and global growth.”

Second, consider the level of urgency conveyed in the article. The posted nuanced explanation recognized IF the euro continues to appreciate, then it could have undesirable effects on exports, prices, and “would intensify the pressures for more stimulus.” That latter is the real fear by the hard money camp. Although Schnabel did not see a need to change policy at next week’s meeting, there is some pressure to do more to achieve its inflation target and in light of the Fed’s shift.

In a separate interview, Bundesbank President Weidmann argued that the measures are for an emergency only and a limited duration. Wunsch, the Governor of Belgium’s central bank warned that assistance will be needed through 2021. Germany’s Finance Minister Scholz, and the Social Democrat candidate to succeed Merkel next year, has been praised far and wide for loosening Germany’s purse strings. Still, many confuse the emergency with a jettisoning of ordo-liberalism. Weidmann’s strict constructionist and hard-money camp may not be a majority at the ECB, but within Germany, it is, and Scholz has called for the re-imposition of the debt brake in 2022.

The Financial Times states matter of factly that the euro had risen “close to all-time highs against a trade-weighted basket of currencies.” Yet, it is not so obvious. Above, for example, a chart of Deutschebank’s trade-weighted euro, It is about the middle of its 20-year range. The Financial Times also conveniently ignored other measures of valuation that make the euro cheap, not rich. The Economist’s Big Mac Index had the euro about 14% undervalued in July. A more rigorous measure of Purchasing Power Parity comes from the OECD. With the euro at $1.1850, the OECD’s model shows the euro to be about 19.5% under-valued.

The euro has fallen for five of the past six years against the dollar. It seems a bit premature to make a big deal about the recent appreciation. At mid-year, it was virtually flat. The issue is really two month’s of gains. The euro appreciated by a little more than 4.8% in July. It was the biggest monthly advance in a decade. The pace of the move is indeed notable, but, on its own, the market calmed down in August, and the euro entered a trading range against the dollar. It had been $1.17-$1.19.

It was the Fed’s adoption of an average inflation rate target (whatever that really means) that provided dollar bears fresh nourishment. Moreover, it follows calls from President Trump for a weaker dollar. It is in this context that some diplomatic parrying may be understandable. And as the Finacial Times article recognized, there is a camp that thinks the euro’s appreciation or at least part of it is about Europe rather than the US. They point to the European Recovery Fund (that had not been launched yet) and the forecasts for a stronger rebound from the pandemic.

Ironically, the Financial Times article appeared on the same day the Markit reported that the eurozone’s August composite PMI slowed to 51.9 from 54.9 in July, and Italy‘s and Spain’s fell below the 50 boom/bust level. Separately, and more disheartening, Eurostat reported that retail sales in the euro area unexpectedly fell by 1.3% in July. The median forecast in the Bloomberg survey was for a 1% increase.

There are several takeaways. First, as of the end of August, the Federal Reserve’s real broad trade-weighted index remains a little higher on the year. The dollar’s recent decline that has gotten so many worked up and so many columns warning of the demise of its numeraire status ought not to be exaggerated. Similarly, the impact of the euro’s appreciation against the dollar has been similarly modest, and it had entered a trading range after the July rally. The Fed’s adoption of the average inflation target threatened a new leg higher for the euro.

Second, even before the pandemic struck the hawks at the ECB were in a minority and seemed to have lost key controversial decisions. They may take to the press anonymously but they do not speak for the ECB. On balance, the ECB looks less concerned about the euro’s recent appreciation than the hawks. The G7 position is that markets should determine exchange rates, but excessive volatility should be avoided. Lagarde is on safe ground reiterating that, though she is too diplomatic to comment on President Trump’s comments that had purposely sought a weaker dollar while US rails against other countries, including for manipulating their currencies, no matter how poor, small, or the extent that it is over-valued.

Third, there seem to be two main narratives. One sees the euro’s rise as a function of not pursuing a sufficiently accommodative monetary policy. Although the ECB has a negative 50 bp deposit rate, expanded its balance sheet by $200 bln in July and August (as the Fed’s balance sheet contracted by about $92 bln in the same period), and has made more than 1 trillion of loans to banks at minus 100 bp, the problem the critics say lies with real rates. If current levels of inflation rates are deducted from nominal rates, then European real rates are higher than in the US, its nominal rates are lower. However, current inflation readings have been skewed by the pandemic and economic shutdowns and are hardly representative of general price pressures. There is a high degree of uncertainty, and the data are terribly noisy.

The other narrative sees the euro’s rise as emblematic at the broader setback in the dollar after its two main legs, interest rate and growth differentials, have been cut. The euro is the next deepest alternative and may serve as the chief alternative to the US dollar. Speculators have been carrying a net long euro futures position since mid-March and took it to a record high in late August. The positioning in the other currency futures is not nearly as extreme.

Fourth, the battle at the ECB is over the future course of policy. The hard money camp is positioning to oppose an extension of the Pandemic Emergency Bond Purchases that have already been extended to the middle of next year. Such a decision is expected at the December ECB meeting, with the cover of new staff forecasts. Meanwhile, the growth of the ECB’s balance sheet slowed in August (~19.85 bln euros on average a week vs 24.9 bln in July, and 45.2 bln in May, June was skewed by the TLTRO) condition thinned during August. Some mention by Lagarde that the purchases will increase now that full liquidity has returned makes good tactical sense.

Denmark stocks higher at close of trade; OMX Copenhagen 20 up 0.04%

3 Great Home Improvement Stocks for 2021 and Beyond

There is no new inflation paradigm, ECB’s Lane says

Talk about snapping right back. Major indices rose just a bit in pre-market trading this morning, nothing too spectacular, but Monday's surge was the best...
Read more
IndiaTimes Stocks

MUMBAI: HDFC Bank on Tuesday sold 1.98 million shares of Central Depository Services at Rs. 936.4 apiece through a bulk deal on NSE. Prior to...
Read more