Fed Can Control Yield Curve But It Can’t Control Gold

Total income during the fourth quarter rose to Rs 4,834 crore as against Rs 4,576 crore during the same period of FY20, IDFC First...
Read more
IndiaTimes Stocks

On a standalone basis, Reliance Capital posted a loss of Rs 3,865 crore as against Rs 2,501 crore at the end of same quarter...
Read more

In a response to the coronavirus crisis, the Fed has already cut interest rates to zero and implemented quantitative easing. But that’s not enough and the U.S. central bankers are now talking about “yield curve control.” What is it and how it could affect the gold market?

It might be useful to compare the yield curve control with the quantitative easing. While the latter deals with quantities or amounts of bonds (e.g., the Fed commits to buying bonds worth $1 trillion, but the market still influences the price), the former deals with bond prices. In other words, under the yield curve control, the central banks pledge to buy whatever amount of bonds the market wants to supply at the target price (instead of a particular amount of bonds at whatever the price).

Although central banks normally target short-term interest rates, the yield-curve control would not be a new policy. It was already used by the Fed during and after the World War II, when it agreed to help Treasury in financing military expenditures and cap the Treasury yields by buying any Treasury bond that yielded above the target. In a more recent history, the Bank of Japan introduced its yield-curve control in September 2016, pegging yields on 10-year Japanese Treasuries around zero percent. Interestingly, under the yield-curve target, the BoJ has been buying government bonds at a slower pace than under the QE, as the chart below shows. This is because investors accepted that the BoJ would buy whatever quantity of bonds to keep yields from rising, so it has not had to buy too many of them to set the price. 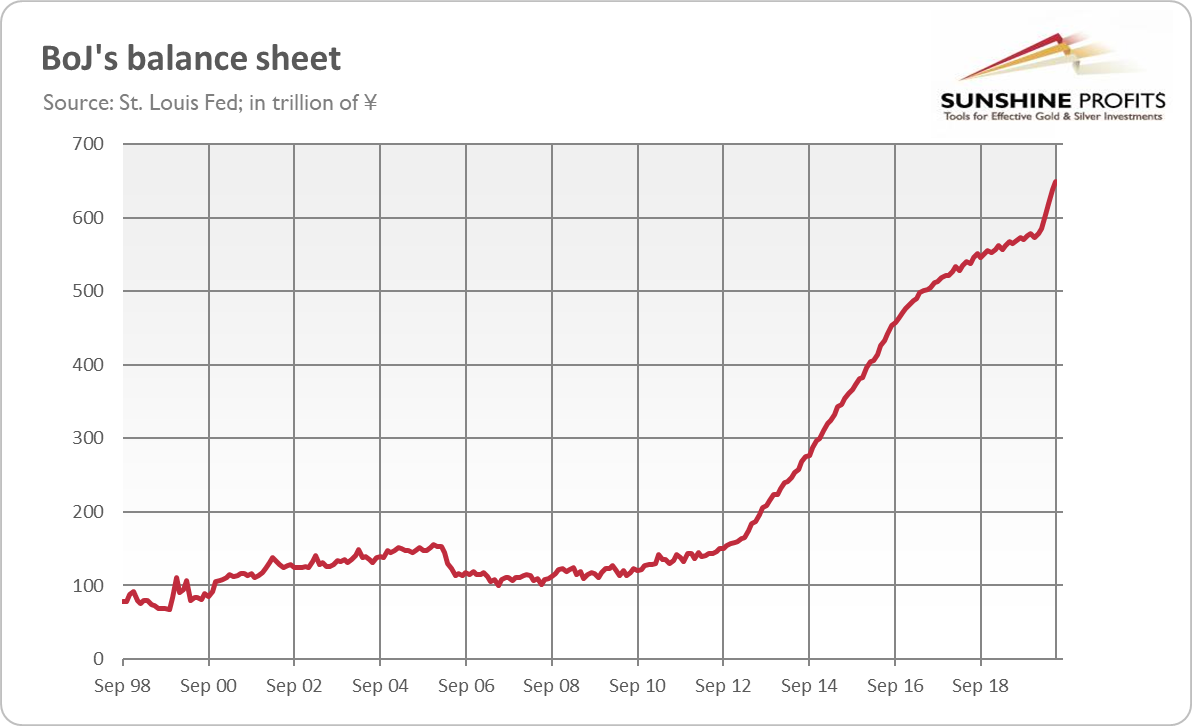 And in March 2020, in response to the COVID-19 pandemic and the following economic crisis, the Australia’s central bank started capping yields on 3-year government bonds at 0.25%, which triggered expectations that the Fed could follow suit.

What would the yield-curve target imply for the monetary policy, economy and the gold market? Well, it’s not rocket science – capping bond yields means that bond yields will remain very low for longer than they would be without the caps. Importantly – oh, what a coincidence! – the Fed would cap Treasury yields, which would allow the government to continue its spending spree and to not worry about the fiscal deficits and soaring public debt.

Another issue is that the yield-curve control flattens the yield curve, which hurts the commercial banks, which usually borrow short-term funds and lend long-term. So, a flat yield curve narrows their margins, impairing their lending ability, which is key to revive the economy.

Last but not least, the yield-curve control can become very easily (if it’s not already) a blunt tool to help government issue debt smoothly and cheaply. As the FOMC admitted itself in minutes of its recent meeting, “monetary policy goals might come in conflict with public debt management goals, which could pose risks to the independence of the central bank.”

It should be clear now that the yield-curve control should be positive for the gold prices, even if it would reduce the pace of the Fed’s balance sheet expansion (as in the case of the BoJ’s experience). After all, the caps on the Treasury yields imply low interest rates. Importantly, if inflation rises the cap on nominal interest rates this would lead to the decline in the real interest rates, as it happened in the aftermath of the World War II. The yield-curve control also caps the government’s borrowing costs, which encourage the increase in public debt, which raises the risk of the sovereign-debt crisis. Moreover, the yield curve control could spur some worries about the central bank’s independence, which could weaken the U.S. dollar. In such a macroeconomic environment, gold should shine. So, the Fed could cap the Treasury yields, while pushing gold upwards.

Total income during the fourth quarter rose to Rs 4,834 crore as against Rs 4,576 crore during the same period of FY20, IDFC First...
Read more
IndiaTimes Stocks

On a standalone basis, Reliance Capital posted a loss of Rs 3,865 crore as against Rs 2,501 crore at the end of same quarter...
Read more
IndiaTimes Stocks

HDFC has entered into a share purchase agreement for sale of 44,12,000 equity shares of Rs 10 each, representing 0.62 per cent of the...
Read more
Finance Expert

Total income during the fourth quarter rose to Rs 4,834 crore as against Rs 4,576 crore during the same period of FY20, IDFC First...
Read more