Gold Climbs From A Rut, But…

Cryptocurrency12 minutes ago (Apr 14, 2021 09:30AM ET) The Ethereum blockchain and the cost of gas have become a cause of concern for developers and...
Read more

‘Tis a Big “BUT” not subtle in our title’s rebuttal. And our rationalized scuttlebutt? Across the week just past wherein Gold settled Friday at 1973, after being in a rut as low as 1908 (on Wednesday), two key near-term technical indicators nonetheless transited from up to down as follows:

And per usual we’ll graphically present those two technical studies. ‘Course given time-proven fundamental common sense, ’tis “Go Gold Go!” by the 3551 debasement value in the above Gold Scoreboard, this year’s broader overall price trend obviously remaining UP! Yet one may wonder per the soaring rate of the green U.S. Money Supply (“M2”) line in the right panel of the Scoreboard’s graphic if Gold shall ever catch up. Indeed it actually is. A bit over a year back on 17 May 2019, the price of Gold (1277) was fully 55.0% below the Scoreboard’s debasement value (2836). Today’s price of 1973 vis-a-vis the debasement value of 3551 is but 44.5% shy. Yeah, ’tis still a lot, but not as much a lot. The point is: we’re gaining.

And year-to-date, (aside from there being still one trading day left in August), the truth remains through eight months that the precious metals have been the very definition of “gaining” comparable to the balance of the BEGOS Markets. Here are their standings thus far. Were this a motor race, Silver has already lapped the bulk of the field numerous times in her turbo-charged comeback which we all know was well overdue:

And yet many so-called “educationally enlightened” entities don’t understand it, a Harvard professor (whose name we’ll withhold so as not to embarrass) penning this past month that “Gold is not a currency”. (Parental note: the College states that its all-in 2020-2021 cost of attending – sans financial aid – is $72,391. Better to invest that in Gold and instead send yer kid to State, what? After all, none of these names finished college: Dell, Ellison, Gates, Jobs, Zuckerberg. Just sayin’…)

Still as stated, despite Gold being long from finished in its run to catch currency debasement, we’ve now those two technical near-term negatives as presented at the outset. Let’s first address the 21-day linear regression trend having rotated from positive to negative below shown in the red-bordered panel. Across the graphic’s past 21 trading days (one month), only the Bond and Gold show their respective diagonal grey trendlines now as negative. But for those markets wherein their baby blue dots of regression trend consistency continue to fall — notably, those for both Gold and Silver — lower price levels ought be expected. Moreover, one wonders for just how much longer the “Baby Blues” can remain pasted upon the ceiling of the “Spoo” (S&P 500), the Index’s “live” P/E ratio this past week having topped a record 60x. To wit: with the price of the Bond falling, its yield in turn is rising, which combined with lousy stock market earnings cannot bode well for the stratospheric S&P. (But then there’s the notion that markets don’t crash in StateSide presidential election years). Either way, here’s the whole BEGOS bunch from a month ago-to-date: 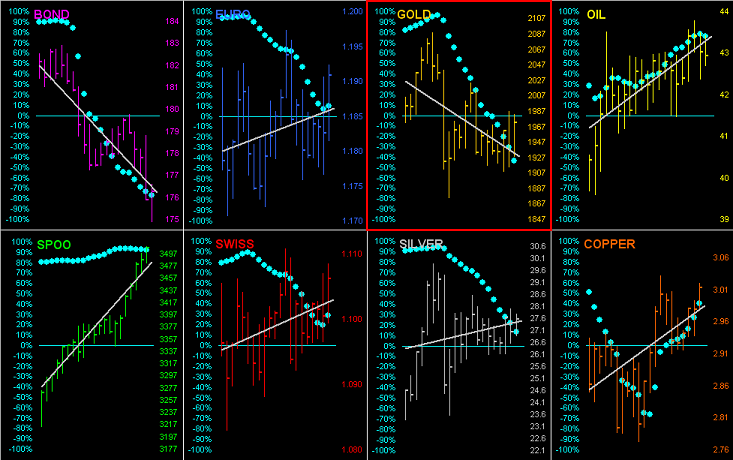 And second, let’s address Gold’s weekly parabolic trend having flipped from Long to Short. The Long parabolic trend came to its end with a duration of 22 weeks, fifth-most millennium-to-date, but sporting the best net percentage gain (+21%) of those top-five and thus the steepest of the lot. Steep indeed: just look at that deviation of the recent weekly price bars above the dashed regression trendline. Nevertheless, the first red dot of parabolic Short trend has made its appearance per the arrows at upper-right: 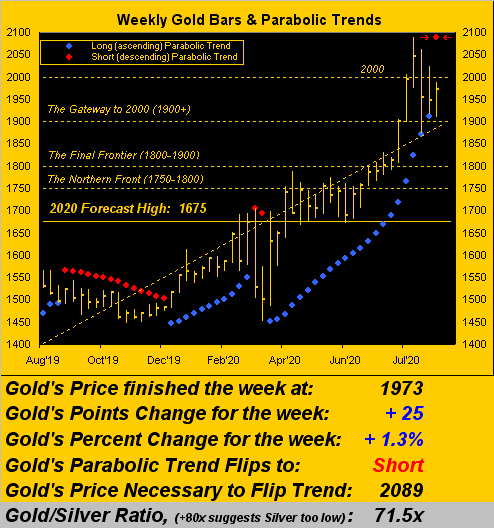 So should Gold fold in being sold, where again are its footholds? As noted a week ago, we see ’em structurally at 1830, 1789 and 1776, although fundamental common sense sees The Final Frontier (i.e. the 1800s) as holding firm given the ever-burgeoning 3Ds of Debasement, Debt and Derivatives. And again per our piece from two missives ago “Dare Thee Short Gold? No!”, we sense ’tis wiser to buy on weakness than suffer a rude awakening from price having gapped up dozens of points over one’s Shortstop, (as we’ve herein historically documented has happened). Clearly, volatile conditions are in force: on Thursday during Federal Reserve Chair Powell’s “virtual” annual Jackson Hole economic policy symposium address, Gold in a 47-minute period traded from as high as 1987 down to 1915. At present, Gold’s expected daily trading range is 54 points and the weekly 85 points.

Continuing to score points is the Economic Barometer, now at its highest oscillative level since 14 January 2019. Amongst this past week’s metrics for the month of July: New Home Sales, Personal Income and Durable Orders all improved, all beat consensus, and all had their June numbers revised higher. Dat’s momentum dere, folks. August’s Consumer Confidence fell a bit, but you wouldn’t know it given the massive amount of money continues to be thrown at the stock market: ’tis HUGE! (See our S&P Moneyflow page). Here’s the Baro: 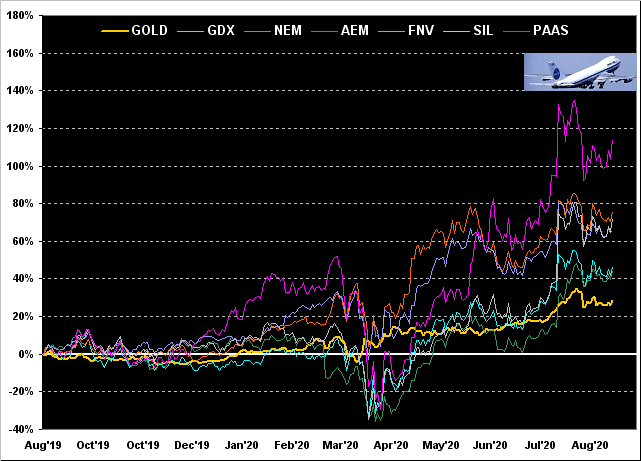 All that said, the 10-day Market Profiles are looking rather fat and bulbous. For Gold on the left, ’tis notably pregnant with the bulk of trading volume in the lower 1900s, the last critical handle to hold appearing as 1924. For Silver on the right, she continues to appear more centered than Gold, her last volume-supportive price being 26.65: 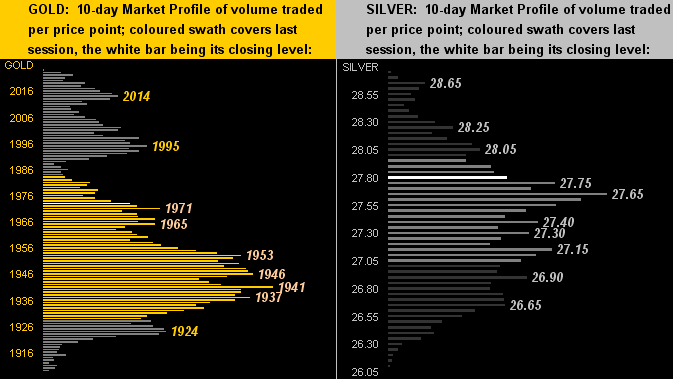 So as August draws to a close, here we’ve the dramatic view of Gold’s Structure spanning some nine years. Indeed a week Sunday comes the ninth anniversary of Gold’s prior All-Time High run to 1923 on 06 September 2011, (during which stint you’ll recall our writing of Gold having “gotten ahead of itself”). But not anymore. Gold relative to currency debasement remains ever so attractive, any near-term pull back notwithstanding: 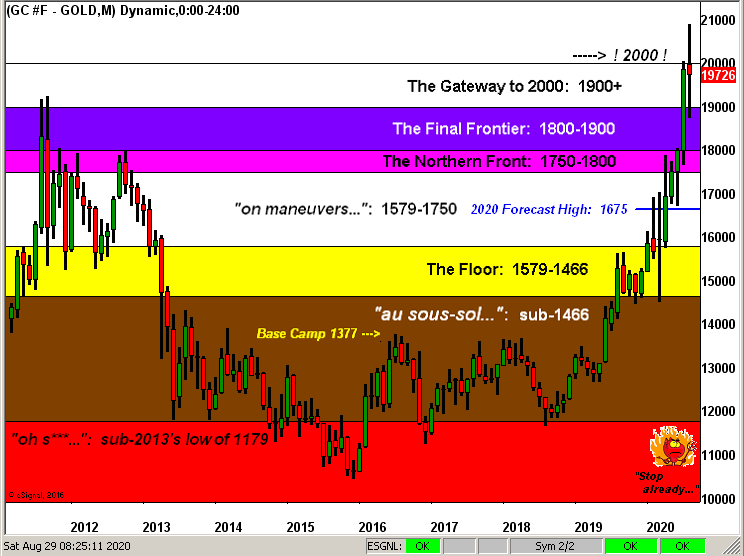 Gliding into the new week with some 15 metrics due for the Econ Baro comes on Monday one of the largest shakeups of “The Dow” in memory (in accommodating Apple (NASDAQ:AAPL) splitting four-for-one), including (can you believe it) the exit of Exxon/Mobil, at one time the largest capitalization-weighted constituent as well in the S&P 500. Leaving, too, are Pfizer (NYSE:PFE) and Raytheon (NYSE:RTN), the replacements being Honeywell (NYSE:HON), Amgen (NASDAQ:AMGN) and (wait for it) Salesforce! What? Are you kidding? Save for a “marked-to-market investment gain” in Q2, this is a company whose earnings teeter either side of 0 (“zero”). What’s next? A renaming of The Dow Jones Industrial Average to The Dow Jones Flavour of the Year Average? Good grief. Fortunately, one asset that shan’t ever see zero is Gold: now that’s a REAL currency!

Cryptocurrency12 minutes ago (Apr 14, 2021 09:30AM ET) The Ethereum blockchain and the cost of gas have become a cause of concern for developers and...
Read more
Investing News

ExxonMobil Covered Call Could Protect Gains Prior To Q1 Results