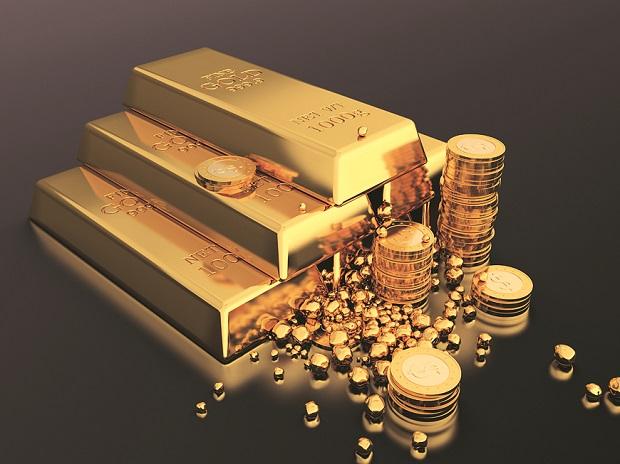 After surging about 30 per cent this year, gold’s rally had come to a sudden halt as US bond yields rose


Global rebounded on Wednesday, extending a series of wild swings that saw the metal hit a record last Friday, before plunging to below $1,900 an ounce. The dire UK economic data renewed fears over a Covid-19-triggered slowdown and prompted a rebound in the metal.


But in India (at Mumbai’s Zaveri Bazar), bullion declined and closed at Rs 53,415 per 10 gram, against Tuesday’s Rs 53,735. Silver, too, fell 7.67 per cent to close at Rs 65,749 a kg, against the previous day’s Rs 71,211. HDFC Securities Senior Analyst (Commodities) Tapan Patel said the coronavirus vaccine announcement by Russia triggered sell-off in safe-haven assets in India.


After surging about 30 per cent this year, gold’s rally had come to a sudden halt as US bond yields rose. Bullion had been one of the best-performing commodities in 2020, as the Covid-19 pandemic pummeled the global economy, prompting central banks and governments to deploy massive stimulus. Its haven appeal was underpinned by a slide in US Treasury real yields into negative territory. 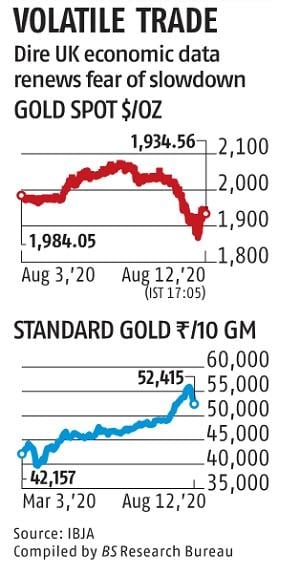 Yet the sharp correction doesn’t signal the end of gold’s run, according to banks, including Saxo Bank A/S, which said the sell-off has gone too far. DoubleLine Capital’s Jeffrey Gundlach said he expects gold to keep trading higher despite the setback. “Gold is bouncing back very strongly. Sentiment has not been damaged and by extension, you could argue that it’s created an opportunity for those who maybe missed the boat on the rally to get in again,” said independent analyst Ross Norman. Underscoring the economic damage caused by the pandemic, Britain’s economy shrank by a record 20.4 per cent in the second quarter, the most severe contraction reported by any major economy so far.


Gains in spot gold, which is seen as a safe haven during times of economic turmoil, were also helped by a weaker dollar, whose recent uptick was halted by the deadlock in Washington over a stimulus package.


Once gold “got to $2,000 per ounce, in a lot of investors’ minds that could have been an opportunity to take profit,” said Gavin Wendt, senior resource analyst at MineLife.


Gold’s still got plenty of high-profile supporters. Among banks that have forecast substantial gains in recent weeks, Bank of America predicted that prices will hit $3,000.


“Expectations of a V-shaped recovery from the coronavirus lockdowns remain far-fetched,” Avtar Sandu, senior manager for commodities at broker Phillip Futures in Singapore, said in a note. “The long-term fundamental drivers of gold remain positive in outlook. However, in the short run, seem to be reacting to headline news events and the technical picture has projected some consolidation ahead.”