Gold: How To Trade It Successfully Using Elliott Wave Principle

Over the past two weeks, I have kept you abreast of the most likely path forward for Gold-related Exchange Traded fund (NYSE:GLD) (ETF). (See my articles here, and here). Last week, I said:

“If the instrument moves below yesterday’s low [Aug. 11 low at $179.43] then next support is at the $170-172 region, where the 50-day Simple Moving Average currently resides. That is an additional 6-7% loss and not something I would like to sit through as it also means GLD is then going through a much larger correction than anticipated. Hence, using the EWP, I now have a clear, well-defined path forward with clean, simple stops that, if hit, will only result in small losses (~2%). No guesses, no arbitrary 5 or 10% stops that the algos easily sniff out. If the stop does not get hit, then the upside is worth it: ~6-7%. Thus, there is a 1-to-3 risk/reward ratio currently. Not too bad.“

Today, I got stopped out of my remaining one-third position at yesterday’s low-of-the-day-level as GLD is making a lower low. The first third sold at $186.50, the second third at $188.80, and the last third at $188.60. Thus, my total profit was 2.7%, erasing the loss of the prior trade and netting me 1.0% on both trades combined. Not much, you may think, but profit is profit. And yes, I put my money where my mouth is. Why did I sell the rest today? Because in bull trends, I prefer to see higher lows. So by raising the stop to each prior day’s low one can remain in a strong uptrend while selling into strength and never having to second guess or worry if the trend changes as you will be stopped out appropriately. Thus, a new downtrend in GLD could be under way.

Using the Elliott Wave Principle, I can determine that either (red) wave-v is under way to ideally $206, or that (red) wave-iv is becoming a more complex correction. See Figure 1 below. Corrections are always of a, at least, three-wave nature: a, b, c, and the recent low could have been (green) wave-a of iv, the current high wave-b (green alt: b) of wave-iv, and now wave-c of iv is under way. 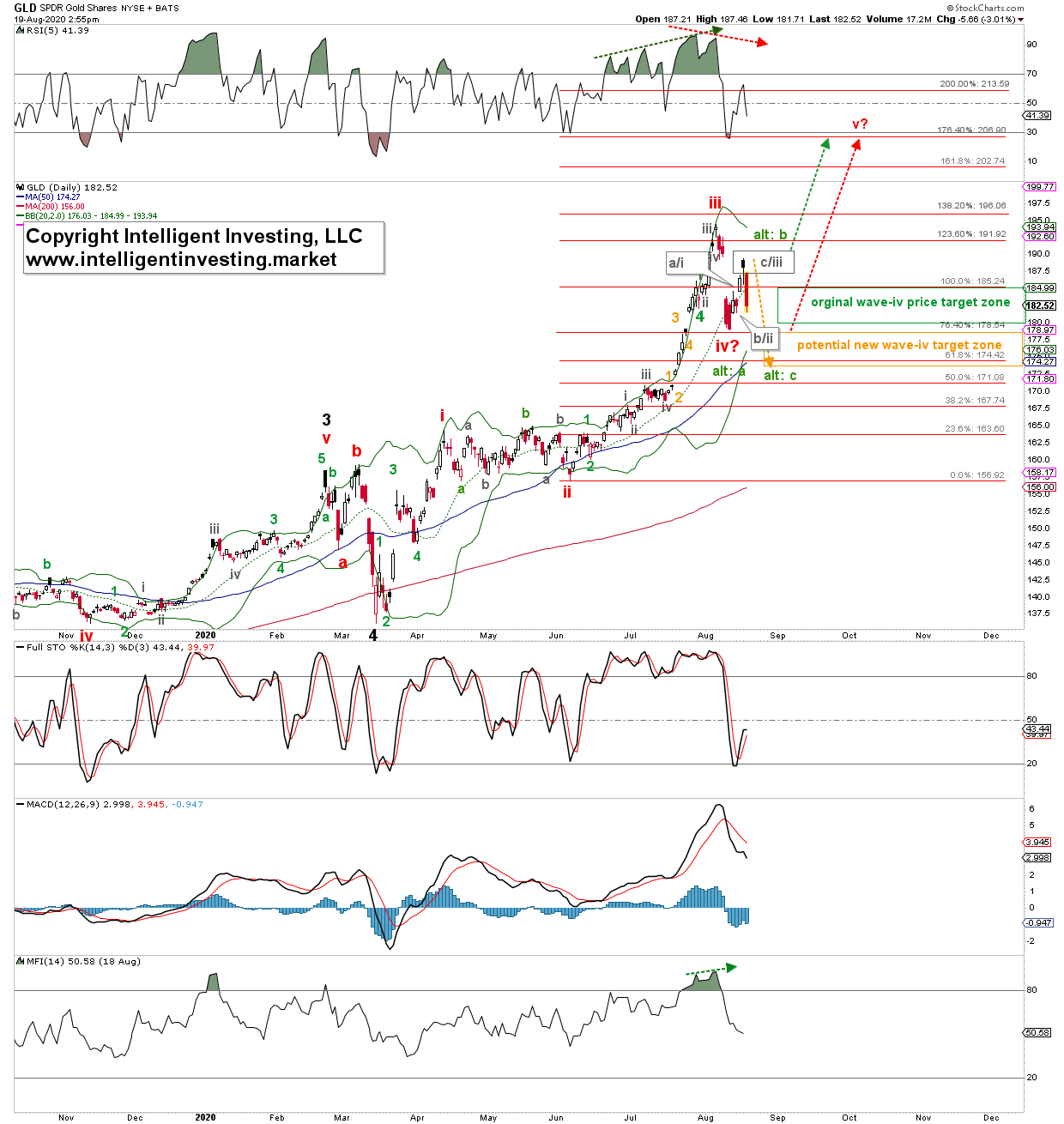 Once an instrument starts rallying, one cannot know if it will only be an a, b, c counter-trend rally or if it is a new 1, 2, 3, 4, 5 impulse higher. That is why I labelled the (grey) minute waves as a/i, b/ii, c/iii. That is the intellectually honest way to mark EWP waves and allows for more successful trading. With today’s overlapping price action, it appears the recent rally was an a, b, c higher, with (grey) wave-c reaching the ideal (grey) target zone I presented to my premium members earlier this week. Thus, using the appropriate stops and scaling out of a position one reduces risk and potential exposure to more downside. If the instrument moves higher, one still has exposure anyway (green dotted arrow). For now, it certainly looks like GLD wants to go lower (orange dotted arrow).

The green box is my original (red) wave-iv target zone, and GLD bottomed in it perfectly last week and rallied as anticipated. But, with today’s price action, I am concerned the lower (orange) target zone at $178.50-174 will become operable, as GLD appears to be in green “alt:c” with an ideal c=a target at $174ish. So let’s see how GLD will move over the next few days and if this new target zone can be reached.

I, for one, will long GLD again when this price region is reached, with the appropriate stops as usual in place because I know am always wrong till proven right by the market.