Nevro Corp. NVRO is well poised for growth on the back of its flagship platform — Senza, and research and development (R&D) capabilities. However, intense competition continues to mar prospects.

Nevro — with a market capitalization of $4.69 billion — is a medical device company that engages in developing and commercializing a neuromodulation platform for the treatment of chronic pain, primarily in the leg. Its beat estimates in each of the trailing four quarters, the average surprise being 27.9%.

Let’s take a closer look at the factors that substantiate the company’s Zacks Rank #3 (Hold). 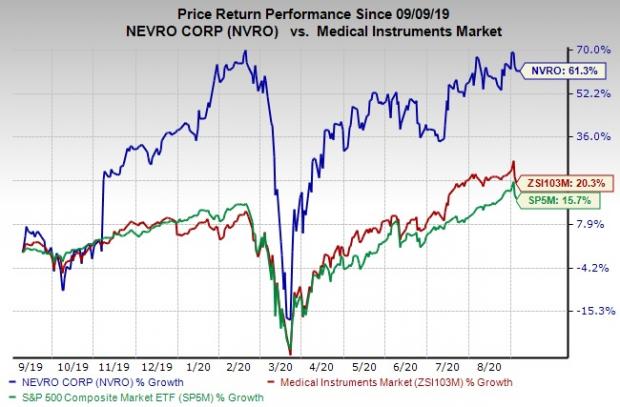 Nevro’s flagship platform, Senza, has been developed and commercialized for the treatment of chronic pain. The system delivers paresthesia-free HF10 therapy, which is superior compared with the traditional low-frequency spinal cord stimulation for the treatment of chronic back and leg pain. Further, Nevro recently launched its next product platform, Senza Omnia, in the United States that is expected to provide the company a competitive edge in the near future.

The Senza Omnia has been gaining traction through the first quarter of 2020. Omnia, which is the only SCS platform that can offer high frequency, plus lower frequencies and paired waveforms, received an earlier-than-expected approval in Australia during the first quarter.

In May 2020, the company announced the receipt of CE mark approval for the Senza Omnia Spinal Cord Stimulation (SCS) system. This next-generation SCS system has been created and developed in close consultation with customers to offer a comprehensive solution for chronic pain. This approval is likely to aid Nevro in strengthening its international presence further. In the second quarter of 2020, the company launched Omnia in Europe and Australia and it is ramping efforts in those markets.

Nevro aims to continue improving patient outcomes and expanding patient access to HF10 therapy through enhancements to Senza and development of newer indications.

Through the second quarter, the company continued to invest in R&D to strengthen its product capabilities and expand its total addressable markets with new clinical data and patient indications. On the clinical and regulatory side of things, the company has continued to conduct a plethora of remote clinical studies for its 2 large-scale randomized controlled trials.

Which Way are Estimates Headed?

For 2020, the Zacks Consensus Estimate for revenues is pegged at $362.5 million, indicating a decline of 7.1% from the prior-year quarter. The same for adjusted loss per share stands at $2.95.

PerkinElmer has a projected long-term earnings growth rate of 17.4%.

West Pharmaceutical has a projected long-term earnings growth rate of 17.4%.

Thermo Fisher has an estimated long-term earnings growth rate of 15%.

The Hottest Tech Mega-Trend of All

Last year, it generated $24 billion in global revenues. By 2020, it’s predicted to blast through the roof to $77.6 billion. Famed investor Mark Cuban says it will produce “the world’s first trillionaires,” but that should still leave plenty of money for regular investors who make the right trades early.

Want the latest recommendations from Zacks Investment Research? Today, you can download 7 Best Stocks for the Next 30 Days. Click to get this free report