Last month marked the 50th anniversary of President Nixon’s suspension of the convertibility of U.S. dollars into gold. This move broke the last thin link between world currencies and the yellow metal, effectively ending the ersatz of the gold standard that we still had back then (the official end came in March 1973, marking the start of an era of freely-floating fiat currencies).

I wrote about the collapse of the Bretton Woods in the last edition of the Gold Market Overview, but as it was a truly revolutionary event that paved the way for today’s monetary conditions, it’s worth mentioning the topic again.

You see, as weak the diluted post-war version of the gold standard was, it limited the U.S. central bank’s ability to increase the money supply, as there was still a possibility that other participants of the system would redeem their dollars for gold. But Nixon “suspended temporarily” the convertibility of the dollar into gold, and while gold is away, the mice will play. Without any true constraints, the pace of annual money growth hit double digits. The CPI inflation rates followed, and the great stagflation of 1970s emerged, as the chart below shows. 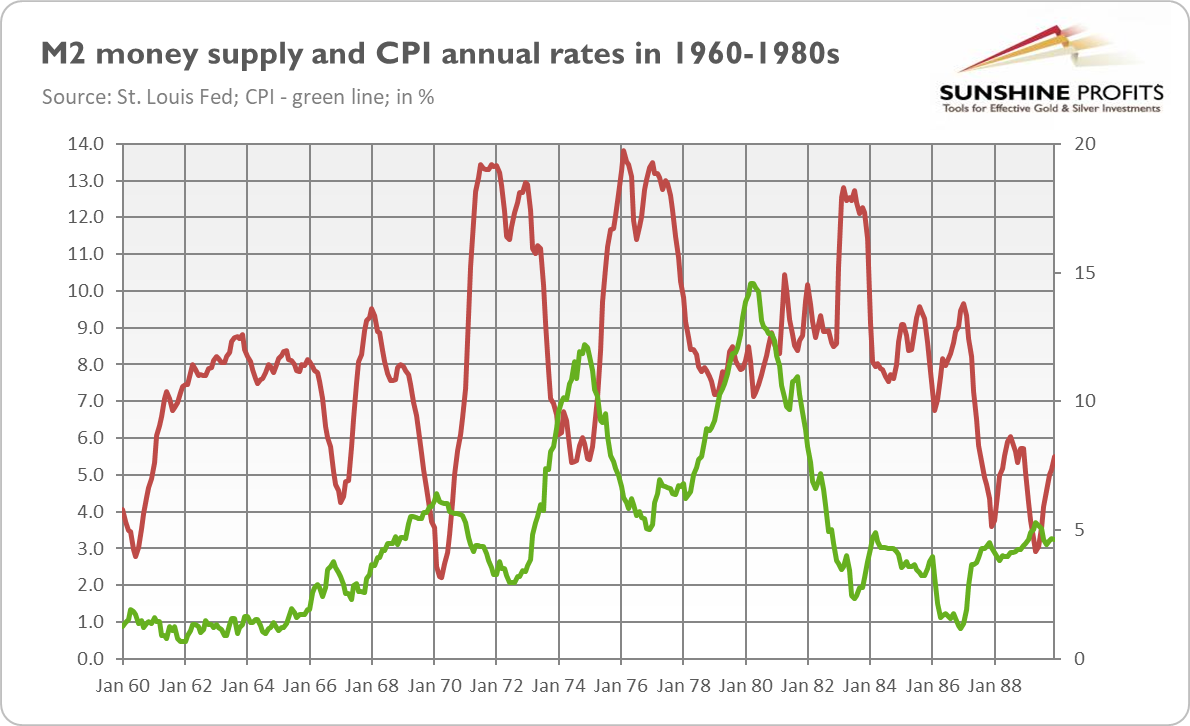 What’s more, without the discipline imposed by the gold standard, the central bank could much easier monetize the public debt. The governments could spend more, maintain fiscal deficits and increase their indebtedness. In short, without gold as an anchor for monetary policy, we got more money printing, more debt, higher inflation, and more severe financial crises.

Now, one could ask: if the current monetary system, or – as some analysts prefer to call it – non-system is so bad, why isn’t the price of gold higher? Shouldn’t it be rallying, indicating how rotten our fiat-money-debt-fueled economy is?

Well, there are many answers to this questions. First of all, let’s note that the price of gold has already surged about 4,100%, or more than 7.7% annually, on average, since 1971 (see the chart below), which is really something! 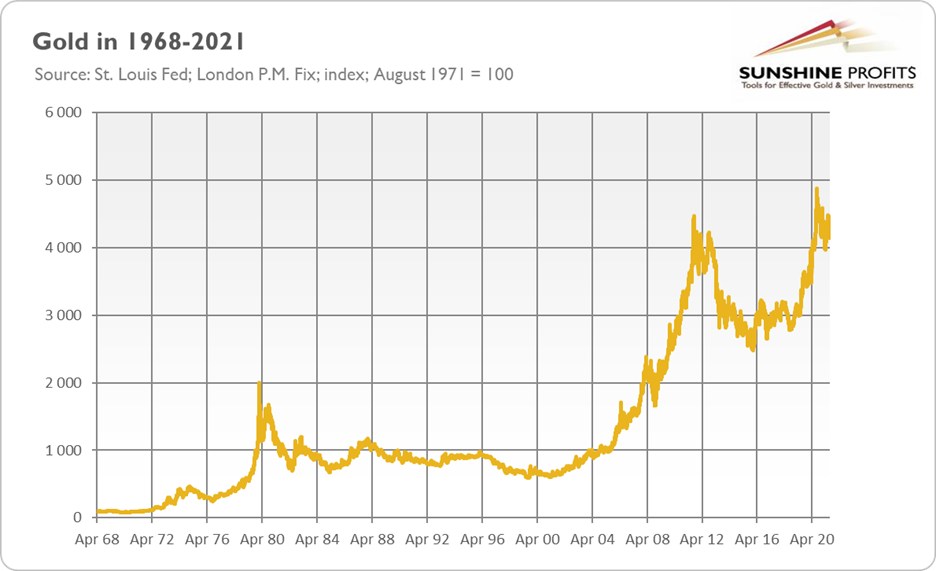 Second, financial markets are great supporters of the current monetary system, as they love loose monetary policy and liquidity drips from the central banks. Please remember that the U.S. stock market welcomed the closure of the gold window by increasing 3% the next day after Nixon’s infamous speech.

Third, even poor systems can work for a while. Communist economies didn’t collapse immediately, despite their obvious inefficiency. The Breton Woods worked for almost 30 years despite its evident flaws. Furthermore, there were some institutional changes implemented in order to strengthen the current system, such as central banks’ independence, inflation targeting, prohibition of direct monetization of public debt, etc.

However, probably the most important reason is that the gold standard was in a way replaced by the U.S. dollar standard, as the greenback substituted gold as the world’s reserve currency. In such a system, there is simply no alternative to the U.S. dollar as a global reserve. This is because America became even more central to global finance than it was in 1971 and because practically all countries conduct similarly unsound monetary and fiscal policies (and some central banks like the ECB or BoJ are even more radical than the Fed). The greenback’s strength limits dollar-denominated gold prices.

However, it’s worth remembering that unlike the gold standard, under which currencies were backed by gold (or: they were actually defined as units of gold’s weight), today’s currencies are backed only by the reputation of their issuers, which is not set in stone. This is actually why the Breton Woods eventually collapsed. Initially, the U.S. enjoyed a great reputation, and no one even dared to question Uncle Sam’s ability to convert dollars to gold. But the prolonged war in Vietnam, Johnson’s great social programs, increased government spending and growing deficits undermined this reputation, and other countries started to demand gold for their dollars.

The same may happen in the future, especially given that Trump has left some scratches on America’s reputation. With Biden continuing his predecessor’s populist economic doctrine, the greenback should face further headwinds. What’s more, with ultra-low interest rates and a mammoth pile of debt, the room for inflating the economic bubble is limited. Although the return to the gold standard seems unlikely, the recurring business cycles and economic crises are more than certain. That’s great news for gold.

In other words, the current system persists mainly thanks to the faith in the central banks’ ability to control inflation, even without the discipline of the gold standard. However, this belief can break down one day. The Fed might be right that the current high inflation is temporary. But if not, we could have “Powell’s shock,” which could strengthen gold, just as Nixon’s shock did.