Indian cotton group wrestles with US over whose forecasts are better

Denmark stocks lower at close of trade; OMX Copenhagen 20 down 1.24%

JPMorgan advises clients to expose 1% of their portfolio to Bitcoin The Cotton Association of India, or CAI, says the USDA stockpile estimate for India is overly bearish


Grumblings from an Indian industry group have been growing louder against the US Department of Agriculture over who is the more accurate forecaster for the fiber in the world’s largest producer.


The Association of India, or CAI, says the stockpile estimate for India is overly bearish. The group has written to the US agency, and has also asked Prime Minister Narendra Modi’s government to intervene to “restrict the damage” over the perception that there’s a supply glut.


Meanwhile, the says it includes bales, such as those undelivered by farmers during the pandemic, that the Indian group doesn’t incorporate, and doesn’t make adjustments for what may be seen as good or bad for producers. 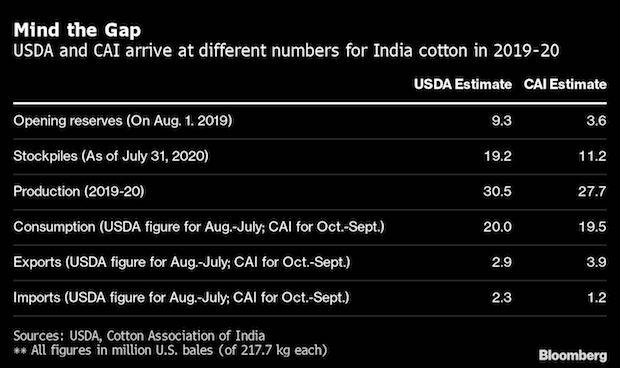 “Due to this, the buyers are reluctant to buy Indian cotton as they feel that there is ample availability of cotton in India,” the group said in a letter to the Indian Textiles Minister.


Stephen MacDonald, chairman of the USDA’s cotton estimates committee, said because of the pandemic, state-run Cotton Corp. of India may no longer be holding an earlier estimated 13 million Indian bales (of 170 kilograms each), but that cotton is still in India and has neither been consumed nor exported.


Atul Ganatra, president of the Cotton Association of India, says the group’s inventory estimate includes fiber held by farmers and government agencies, as well as the Cotton Corp. of India.


“When our estimates come in with a higher level of production or stocks, all else equal, that’s somewhat bearish for the market,” Robert Johansson, chief economist at the USDA, said in a telephone interview. “We try to provide the best information we can. We see that as good for producers because they can make good management decisions.”


“I can see that producers are unhappy that demand is falling and that production is up relative to demand, which generally pushes the market down,” Johansson said. “It’s not just on cotton or for Indian stakeholders but we hear from farmers in the US as well.”


“The has historically assumed considerably more storage space for cotton in India than India says exists,” said O.A. Cleveland, professor Emeritus, agricultural economics, at Mississippi State University, who’s studied the market for more than four decades. “It’s a long running disagreement that the USDA should at least recognise, but historically has only paid lip service to.”


The USDA said it was good to have independent voices providing their opinions and analysis. “It’s not like we ignore those, we also look at them. But ultimately we have to stand by our estimates and the data we are getting from India and other countries,” said Johansson.


Cotton prices in India were down more than 20% from a year earlier during the summer, before partially recovering, owing to a slump in demand from millers in the country because of the coronavirus and a drop in international prices. Prices of the fiber in the South Asian nation will likely be under pressure as better-than-normal monsoon rains have boosted plantings this year. The area under cotton climbed to 12.84 million hectares (31.7 million acres) as of Aug. 28 from 12.49 million hectares a year earlier, according to the farm ministry.


Cotton prices for December fell as much as 1.3% to 64.15 cents per pound on ICE Futures US in New York on Thursday.


“Cotton farmers are definitely suffering everywhere,” said MacDonald. “I would argue that is not because of the USDA. It’s because of the stocks, the demand destruction caused by Covid. Everybody’s stocks have gone up.


Read our full coverage on cotton

Denmark stocks lower at close of trade; OMX Copenhagen 20 down 1.24%

JPMorgan advises clients to expose 1% of their portfolio to Bitcoin

Market Watch: Is today’s crash a harbinger of bad times?

Welcome to ETMarkets Watch, the show about stocks, market trends and money-making ideas. I am Nikhil Agarwal and here are the top headlines at...
Read more
IndiaTimes Stocks