It has been a torrid time lately for lumber futures. After soaring more than 95% on the year, the prime raw material for homebuilding in the United States has plunged over 40% the past six weeks. Reason: Home builders have had enough and wanted to bring the rocketing commodity back to earth. 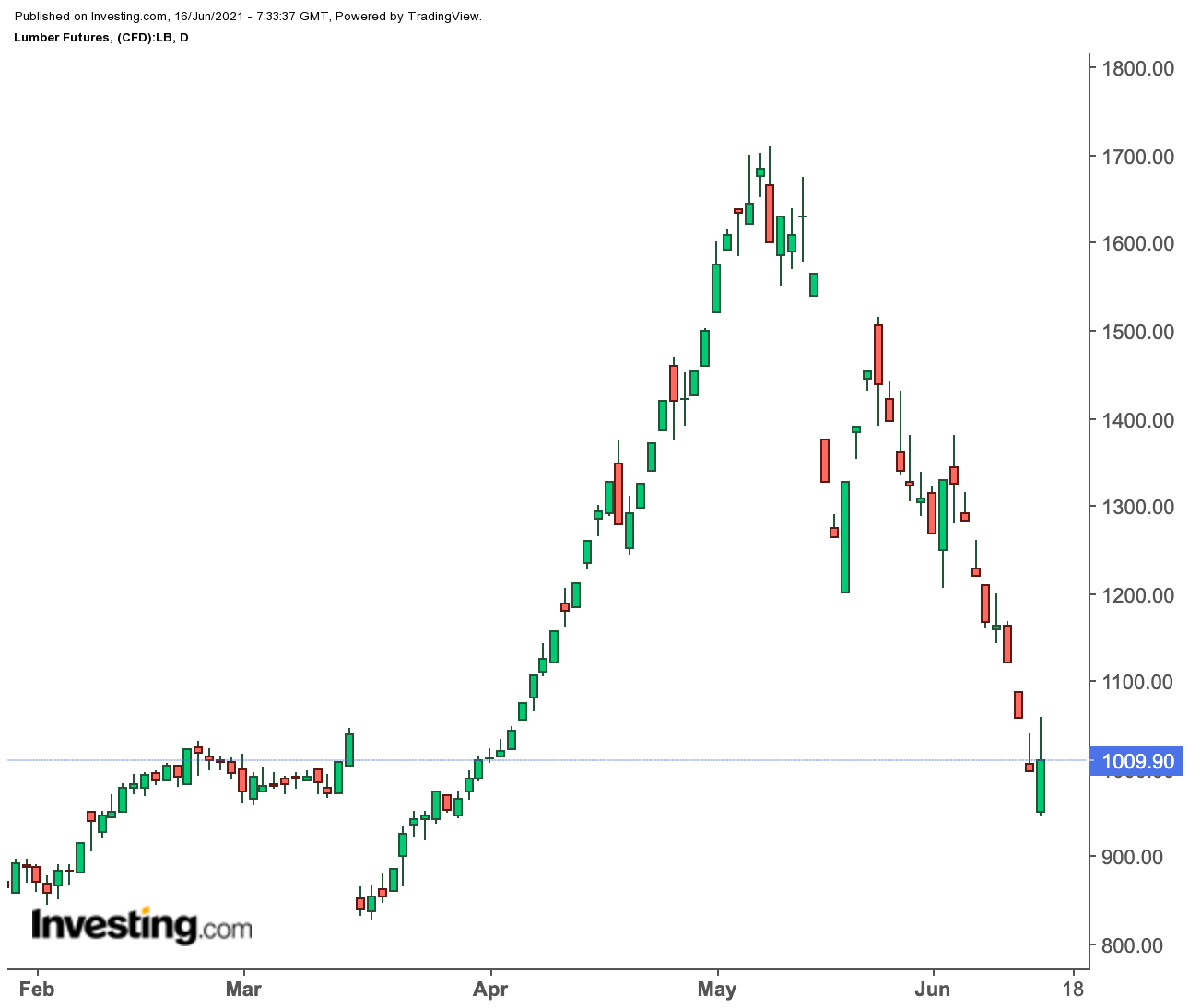 In what has been a mixed picture for US inflation, the consumer demand that has been repeatedly cited for the soaring price of virtually everything in the country is apparently also responsible for the plummeting price of lumber and builders’ lack of penchant to put up houses as costs keep rising.

US home building confidence hit 10-month lows in early June due to higher costs and declining availability for softwood lumber and other building materials, the National Association of Home Builders said in its monthly survey released Tuesday.

While an inventory shortage was clearly behind the record home sales and prices in the first quarter, soaring costs have also moved some new homes beyond the budget of prospective buyers, Chuck Fowke, chairman of the builders’ association, said.

“Policymakers need to focus on supply-chain issues in order to allow the economic recovery to continue,” Fowke added, in a nod toward the Federal Reserve, which is to announce its monetary policy for June today amid intense debate over the impact of US price pressures now, and whether the central bank was doing enough about it.

The Fed insists that the current inflation experienced by Americans is “transitory” due to bottlenecks in supply chains caused by months of COVID-suppression, and that the phenomenon will fade as the economy makes a full recovery from the pandemic. The central bank has, therefore, refused to tinker with its super-low 0-0.25% interest rate regime and equally generous $120 billion of monthly asset purchases to bolster the recovery.

US Retail Sales Down Too For May

Homebuilding confidence isn’t the only thing reported lower on Tuesday. US retail sales for May was also in the negative, the first time in three months, on increasing signs that some of the upward price pressures in the economy may be giving way. Seems either consumers became tighter with their money, or changed spending habits, after the end of government stimulus payouts during the COVID-19 pandemic.

If indeed US consumers were splurging less, then the Fed may have less to do to curb inflation. The consumer makes up two-thirds of the US economy; there is no greater force to swing the price pendulum either way in the country.

The housing market–the epitome of the so-called American Dream–is also one of the pillars of the US economy, accounting for nearly 15 percent of Gross Domestic Product.

Housing had been the star performer in the economy’s recovery from the COVID-19 recession, with investment in residential construction experiencing double-digit growth between the third quarter of last year and first quarter of 2021.

Lumber may be one of the first commodities to exhibit primary or secondary consumer sentiment–secondary in the case of homebuilders–towards the unsustainable rally in the commodity.

Crude oil may follow at some point, having tacked on a mind-boggling 22% in just 10 weeks, even as US fuel demand remains somewhat questionable. Oil shouldn’t get to $80 a barrel simply because the bulls in Goldman Sachs have called it so, or that Saudi Arabia wants it that way, and trying to legitimize that wish by arbitrarily citing that magic word called “demand.”

The consumer ultimately decides what to pay for these commodities.

If these raw materials appreciate beyond the means–or will–of the consumer to pay, then something has to give. Those starry-eyed about oil-based inflation now shouldn’t forget the 2008-09 financial crisis partly triggered by crude at $147 a barrel, or the most recent history of minus $40 a barrel seen at the height of the pandemic.

Back to lumber, industry experts, like Paul Jannke of Forest Economic Advisors, have been warning for some time that a major correction was coming.

Since the lofty heights of May, lumber futures have hit the ground with a thud.

Lumber May Have Deeper Correction Ahead

Jankke predicted that lumber could plunge to around $800 or slightly lower by June-end. He cautioned that if prices do get into the $700-$800 range, there could be a rush of dealers coming in to lock in orders–a move that could push lumber higher again to around $900.

But as the US economy fully reopens and transportation disruptions–along with other bottlenecks in logistics and supply–ease, the market should be set for a second and deeper round of consolidation, Jannke said.

“In the second half of this year and next year, we do expect prices to come off dramatically as supply comes back in full force.”

Investing.com‘s own Daily Technical Outlook has a “Strong Sell” on lumber, with its top two modeling variants–Fibonacci or Classic–suggesting an immediate bottom of between $967 and $938.

Under the Fibonacci model, lumber could move down in a range that begins at $994 and proceeds to $984, before sliding to $967.

Disclaimer: Barani Krishnan uses a range of views outside his own to bring diversity to his analysis of any market. For neutrality, he sometimes presents contrarian views and market variables. He does not hold a position in the commodities and securities he writes about.