The “tight hot summer” could be over for U.S. natural gas, as underwhelming storage injections are expected to have ended with last week’s estimated doubling of inventory builds amid cooler weather.

As the Energy Information Administration prepares to release its weekly storage data at 10:30 AM (14:30 GMT) today, gas traders are bracing for an addition of 68 billion cubic feet for the week ended Sept. 4, versus the 35 bcf injection in the week to Aug 28.

The last time U.S. gas inventories saw a higher injection was during the week to June 19, when there was a 120 bcf boost. Since then, injections have mostly ranged between 65 and 35 bcf, falling to as low as 26 bcf once.

If indeed the market gets a 68 bcf build, it will raise gas in storage to 3.523 trillion cubic feet–about 13% higher than the five-year average and 17.6% above the same week a year ago.

With the approach of the fall season, the intensity of summer heat started giving way since last week, ushering in more bearable indoor temperatures that require less use of air-conditioners and gas burns to power them. 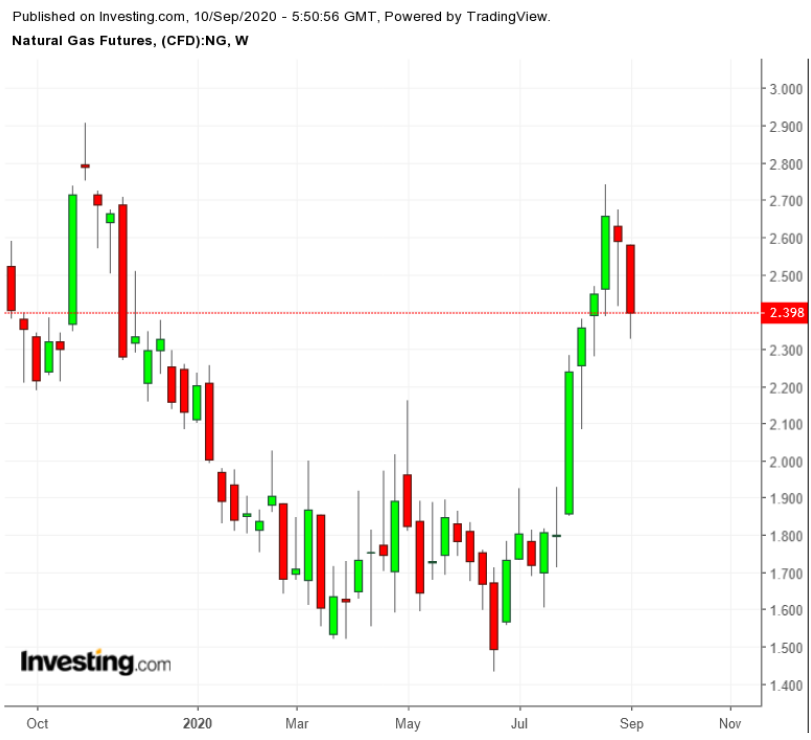 Accordingly, the October front-month gas contract on the New York Mercantile Exchange’s Henry Hub has dipped in the past four sessions, heading for a weekly drop of 7.5% that added to the previous week’s 2.6% swoon.

Price-wise, October gas itself was exhibiting “Sell” signals on the 1/5/15/30 charts as well as the hourly and 5-hour models. Investing.com’s “Classic” modeling shows that at Wednesday’s settlement of nearly $2.40 per mmBtu, Henry Hub’s benchmark gas contract appeared poised to test a baseline support of $2.168.

“Storage expectations have a lot to do with the current pullback, as the market prepares to realize the relatively bearish injections that have been projected for weeks,” Dan Myers, analyst at Houston-based gas risk consultancy Gelber & Associates, said in an email to the firm’s clients, seen by Investing.com.

“In subsequent weeks, at and above-average (storage) injections are (likely) to continue, thanks to overall temperate September weather and nat gas’ eroded role in the power stack.”

Dominick Chirichella, director of risk and trading at New York’s Energy Management Institute, concurred with that view, at least from the weather perspective.

“Record-cold patterns will unwind across the Central U.S. later this week,” Chirichella said in a note issued Wednesday, adding, however, that there was also “a fair amount of model disagreement in place” for the next two weeks of forecasting.

Last week’s weather was warmer-than-normal, with 77 cooling degree days, compared with a 30-year average of 68 CDDs for the period.

CDDs, used to estimate demand to cool homes and businesses, measure the number of degrees a day’s average temperature is above 65 degrees Fahrenheit (18 degrees Celsius).

Chirichella said autumn cold will shoot across the Rockies and Plains into the Upper Midwest. “The cold should modify quite a bit, but below normal temperatures are likely to linger through the day 2-5 period.”

Meanwhile, above normal temperatures will impact the East, although cooling will occur late in the period across the Northeast, he said.

A sharp frontal boundary will, meanwhile, set up across Illinois through eastern Texas and will struggle to move much through the period. “Significant warmth will impact the Pacific Northwest during the period.”

“Temperatures will be above normal across the West during the day 6-10 period. The warmth will peak across the northern Rockies. Significant model disagreement remains the theme of the day 11-15 period.”

Export activity on the LNG front could limit the downside in gas.

Feed gas flows at Cheniere’s Sabine Pass export terminal, which had previously been idled by Hurricane Laura in late August, jumped above 2 Bcf Tuesday. That pushed the total for all Lower 48 terminals above 6 Bcf, “higher than we have seen since the middle of May,” Bespoke Weather Services said in that blog.

A LNG vessel berthed at Sabine Pass on Wednesday became the first expected loading in the wake of the recent Hurricane Laura, according to ClipperData. The previous loading witnessed from the terminal was Aug. 23. Feed gas supply to Sabine Pass rose to 2.84 Bcf/d Wednesday, “pointing to the resumption of exports,” ClipperData noted.

The Cameron LNG export facility in Louisiana, however, remained offline and flows to the facility were stuck at zero as trading got underway Wednesday. EBW Analytics Group said traders were concerned the facility might not resume normal operations for several more weeks as crews in the Lake Charles area of Louisiana work to restore power following Laura. EBW said the worries were likely overblown.

“While restoring power to the Lake Charles area could take up to two months, Cameron is on the outer edge of the affected area,” EBW said.

“Power can be restored while the rest of the system is still being rebuilt. Some observers believe the required work could be completed in one to two weeks.”

Continued LNG improvement is widely viewed as important to ward off storage challenges as summer fades and domestic cooling demand begins to ease. “Certainly, if we can sustain this level of LNG the balance of the month, that could be enough to lessen the risks of containment,” Bespoke said.