Over the past few weeks and months, my research team and I have been actively publishing this research to help you better understand what is really happening in the markets right now. With gold trading above $2,000 for the first time and silver trading near $27.50, skilled traders need to understand the risks in the markets that precious metals are warning of. Think of it like this, as long as gold continues to trade near or above $1,900, the risk levels in the global markets are at extreme levels for traders and investors. If gold breaks above $2,400, then there is a very real concern that the global markets could be close to some type of decline/collapse event.

My research team believes the U.S. stock market has already peaked near the January/February 2018 market highs. Our proprietary index analysis and price modelling systems suggest the U.S. stock market has been buoyed by the Federal Reserve stimulus and foreign capital inflows (investment) while the U.S. Dollar has strengthened. This trend may continue for a number of weeks or months, but precious metals are already warning that real fear has accelerated to levels we’ve not seen since 2010~2011.

We believe the upside potential in precious metals could drive a very wide sideways market rotation, very similar to what happened between 1999 and 2011, over the next 3+ years that may catch many skilled traders and investors off-guard. Historically, when the stock market rallies in a speculative mode, like we saw in 1997~1999, a price bubble forms as speculators and retail traders pile into the hot trades with a “fear of missing out” (FOMO) belief. This process drives price levels to extreme highs and creates an elevated level of fear by many experienced traders who have lived through this type of event before.

We are going to show you a price cycle event that takes place between the SPX500, gold and the relationship between these two symbols. The first setup, entitled ‘A-Setup’ on the chart below, took place over 11+ years at a time when stagflation had taken a toll on the U.S. economy in the late 70s and early 80s. The growth of the SPX500 throughout the 1990s was impressive – well over 580% from 1987. 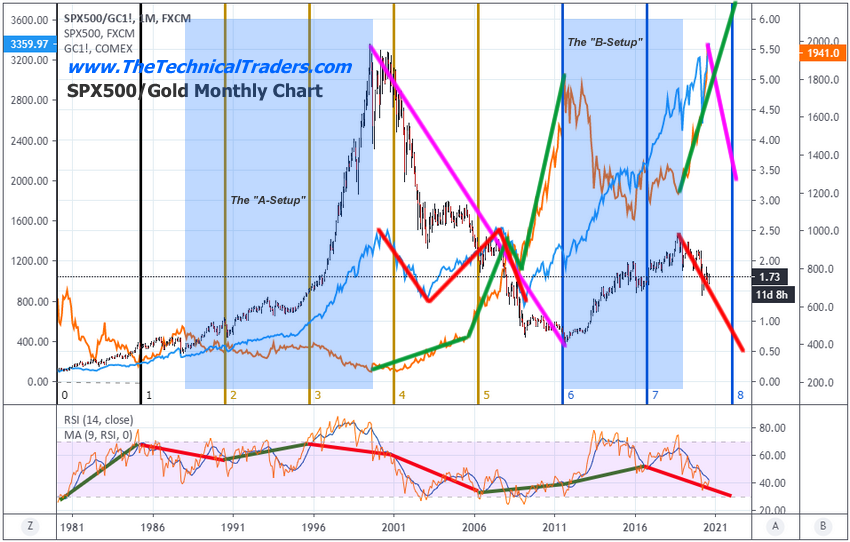 The recent growth of the SPX500 from the March 2009 lows is just over 400% and has recently rotated in a volatile sideways price correction related to the COVID-19 virus event representing a nearly 36% correction. Back in 1998, a similar type of correction happened just before the peak in the markets where the SPX500 corrected nearly 23%, recovered very quickly and rallied from those lows another +66% before peaking in January 2000.

We believe the “A-Setup” represents a longer-term price setup that represents a price bubble and investor fear balancing out greed and risk as price levels extend into the stratosphere. We believe a similar cycle setup has completed whereas the first contraction wave, prompting a strong rise in precious metals prices, has completed while the SPX500 attempts a FOMO driven final rally attempt. If our research is correct, precious metals will break higher as risk outweighs greed over the next few weeks and months – likely pushing the SPX500 lower and resulting in a downward correlative price event for the SPX500/Gold ratio. Very similar to what happened after the peak in 2000.

This downside correlative event will work to address the price bubble and to revalue the U.S. stock market near levels that provide a resurgence in organic growth. The excesses of the global markets were reduced to critical valuation levels by this process where the organic economy recovered enough to drive future growth, Just like what happened in 2004 through 2011~12. The difference this time (B-Setup) is we believe the cycle is operating at about 1.3x to 1.5x faster than the cycle that took place between 1988 and 2000. Therefore, we believe the cycle will be 1.5x to 2.0x more volatile.

We urge traders to stay very cautious of the markets right now. Even though it appears that the recovery is strengthening and the stock market level is at, or near, all-time highs, warning signs are everywhere if you are paying attention. A recent article discussing Walmart (NYSE:WMT)’s earnings release and sales data for August supports the proposition that consumer demand is falling as stimulus checks run out. In the article, Walmart CEO Doug McMillon said: “My sense is that the order of things, the order of tailwinds that impacted the business were one, stimulus, two, eating at home, three, being at home, and all the things that you wanted to do to have the indoors and outdoors be more pleasurable.”

If you read that statement as we do, the transitional process that took place over the past 4+ months where the U.S. government provided stimulus and unemployment benefits that, for some, equated to more monthly income than they achieve while working, presented a “spend-happy” consumer with lots of free time on their hands. We believe consumer activity will change dramatically and the economic recovery everyone seems to believe has taken place will settle into more of a “reality-shock”, especially since the stimulus and unemployment benefits are being decreased (or stopped altogether for some), evictions and mortgage foreclosures are starting to process, and we leave the Summer season and move into fall/winter.

A Breakout Or Breakdown?

Additionally, world trade data suggests the global economy has sunk to the lowest global trade levels since 2010 (at the bottom of the credit crisis). It doesn’t take a college degree to figure out that global trade levels that are many standard deviations below the deepest historical levels over the past 10+ years do not settle well with a perception of a strong global recovery and skyrocketing U.S. stock market price levels. What is says is, “a speculative price bubble has exploded as foreign and speculative traders piled into the U.S.Fed stimulus recovery after March 21, 2020.” And that speculative rally presents the same type of recovery that took place in late 1999 – just before the bottom fell out of the markets.

If the U.S. stock market follows the 2000 price pattern, then a further upside rally should push price levels above the previous peak levels from February 2020. This would prompt many traders and investors to begin leveraging long positions thinking the rally may never end. Our researchers believe the major Fibonacci Price Amplitude Resistance Arc, highlighted in CYAN on the chart below, will act as a soft ceiling in price throughout much of the rest of 2020. If this resistance level holds and price begins to decline from current levels, then we believe a price bottom will setup in late 2021 or early 2022 (similar to the 2002 price bottom). Of course, that leads to the question “will there be a repeat of the 2008-09 peak and subsequent price collapse?” At this point, we’re not certain of any event that far out into the future – but our cycles suggest 2023~2025 may set up a major price peak in the markets. 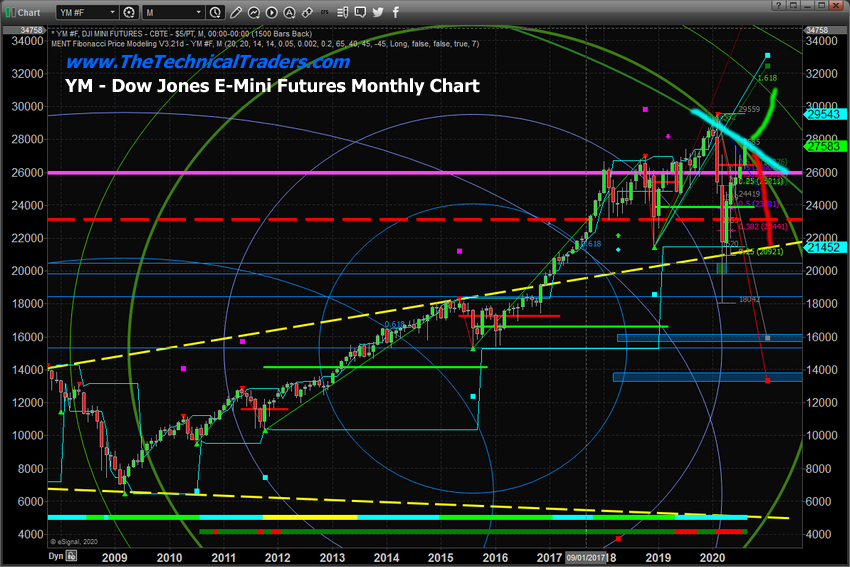 Stay cautious right now. If our research is correct, gold and silver will continue to rally as fear drives the B-Setup further into completion. Volatility should begin to increase and we expect more a more difficult recovery to take place over the next 12+ months. We still have quite a bit of collateral damage to process through the economy and we need to get our economy functioning again so we can get people back to work, increase consumption, and strengthen global trade. If you look at the real data, not the high flying U.S. stock market, the global markets are simply not supporting this speculative price bubble. Therefore, we urge you to stay cautious at this time.

Silver: Is It A Buy After 4 Months In The Red?

Although shares in PepsiCo (NASDAQ:PEP) have not moved much so far in 2021, with a year to date total return of 6.07%, the Pepsi,...
Read more
IndiaTimes Stocks