Schwab (NYSE:SCHW) has been hemmed in by the post Motif deal breakdown gap left behind back on June 24th. This key zone ($36.00) held the multi-week July highs as well as the early August peak. SCHW is bumping up against this area again this week as a solid basing pattern continues to develop. 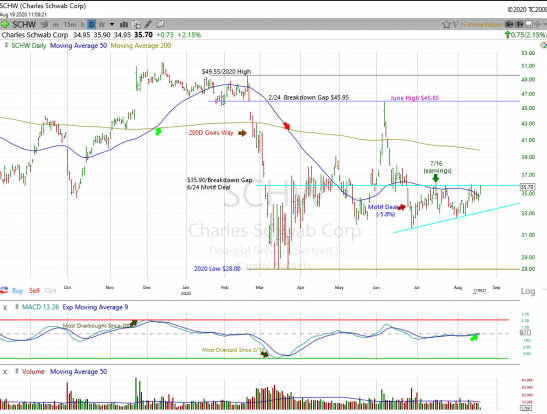 Shortly after the post Motif deal, the sell off of SCHW began to base in a narrowing range. A second straight higher monthly low is in place while the stock remains well below overbought levels (daily MACD).

Long SCHW in some managed accounts.

Schwab Stock: What To Watch

MUMBAI: Nifty50 on Thursday formed a bullish candle on the daily chart as the benchmark index closed over the 18,300 mark and rose for...
Read more
IndiaTimes Stocks

In the previous technical note, it was mentioned that the price behavior of domestic headline equity index Nifty against the levels of 18,200 will...
Read more