This is what happens with volatile assets. They can move dramatically. Get over it, and get used to it.

Does that mean you should avoid silver? No.

It just means don’t buy more than you’re comfortable with for an asset that’s as explosive on the downside as it is on the upside.

Is silver’s bull market over? Not even close.

If you’re smart, you’ll instead make that volatility your friend. Didn’t Warren Buffet say be greedy when others are fearful?

My point is, right now there’s fear in the silver market. So you should at least be interested. Soon, it will be time to get greedy.

And yet, for anyone long on silver, there’s no need to worry. Silver will come roaring back. But more than likely, it’s not quite done correcting yet.

If we look at how silver compares with gold so far this year, the outperformance has been stunning.

The fact is, you should be excited; silver’s on sale!

In my silver update three weeks ago, Silver: 4-year Highs and More to Come, I made the case that silver was cheap relative to gold. At the time, silver was $21 and gold was $1,840.

Here’s a current chart of the gold-to-silver ratio. It’s now at 75. 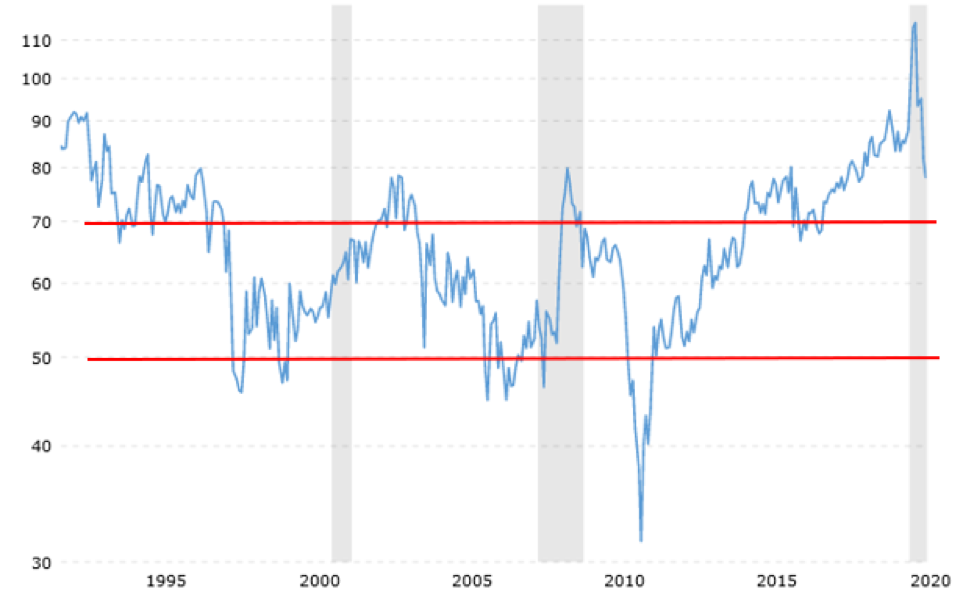 The ratio has spent the bulk of the past 25 years within the 50-70 range. In my view, that’s where we’re headed, perhaps lower.

In my previous silver update, my first price target was $24, followed by $28, both of which it reached with ease. I went on to say, “A near-term pullback in silver is not out of the question after such a tremendous runup.”

And here we are.

But if we look at the technical picture, it’s suggesting silver’s likely to correct more before resuming its climb. 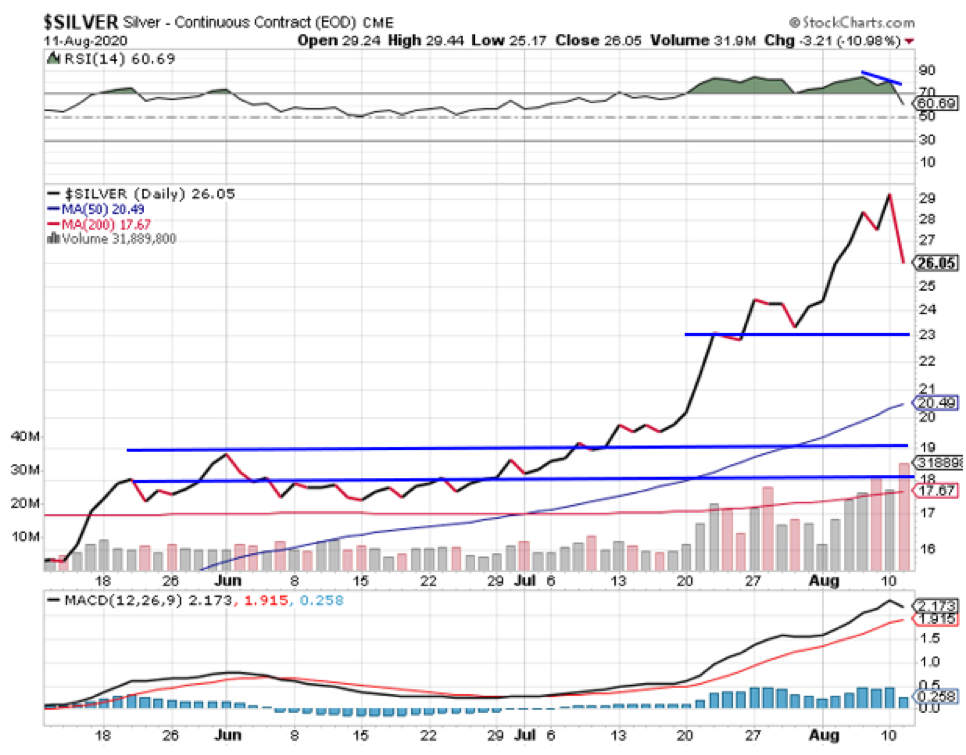 Silver’s RSI has approached 90 (well overbought) several times since late July. However, as silver peaked at $29 on Aug. 10, we had negative divergence with the RSI falling.

Silver looks like its first level of support sits around the $23 level. I think it’s likely we’ll get to at least there in this correction. If it breaches $23, then the next support comes in at $19-$20, followed by $18.

As it pulls back, expect a rally or two on the way, though these are unlikely to hold.

Unlike gold, which is mostly a monetary metal, silver is also an industrial metal.

That means it reacts positively to safe-haven buying/selling as well as industrial buying/selling. So with stimulus packages and money printing to no end, silver will continue to rise as a safe haven.

We’ve seen stocks climb thanks to endless easy money. To some extent, the market is pricing in a government-induced recovery of sorts, which will boost industries that use silver.

Silver is the most reflective and conductive metal around, and is indispensable in the latest tech, solar panels, semiconductors and so on. It’s also naturally anti-bacterial. And that’s why silver’s being bought for industrial purposes as well as monetary.

On the investment side, silver demand was up 10% in the first half of 2020, led by ETFs along with silver coins and bars. Holdings in silver ETFs reached a fresh all-time high of 925 million ounces globally by June 30. Meanwhile, mine supply is expected to drop by 7% in 2020 as compared with 2019.

The key takeaway is that, despite silver’s gut-wrenching selloff, the downside is likely not over.

More importantly, silver will bounce back and probably set new highs for the year. My target on the upside is for silver to reach $34 by year’s end.

As I track silver’s moves, I’ll be sure to let you know when I think silver has bottomed and looks set to resume its climb.