Last week ended on a strong note for the members of the Modern Family who were already leading. The laggards iShares Nasdaq Biotechnology ETF (NASDAQ:IBB) and SPDR S&P Regional Banking ETF (NYSE:KRE) continue to slip.

Grandpa Russell, IWM, also ended the week on a weak note, but it sits at good support created by the trendline from the March lows and the swing high on June 8th. You’ll see these lines on the weekly charts below. 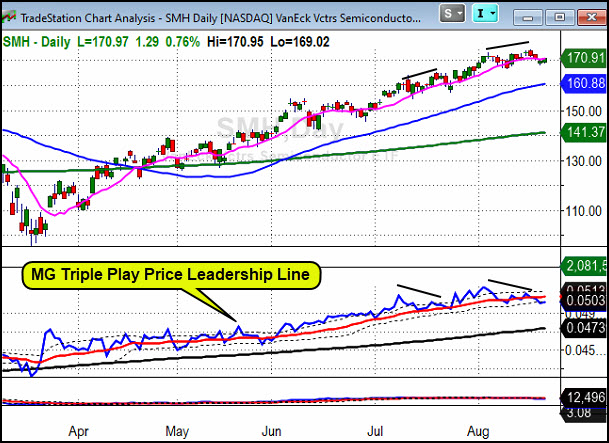 There are two patterns to take note of in this chart.

What happens next will determine whether the SMH remains a bullish leader or an indicator of bearish rotation out of semiconductors.

The combination of these two patterns means that a break below Thursday’s low will be negative in SMH, and a break below the August swing low would indicate a more serious bearish swing low.

If this happens, the market is going to need some new leadership. Let’s take a look at the weekly picture of the Modern Family to see if it can help.

Below you’ll see the Modern Family weekly charts along with a Triple Play Leadership line.

You may also want to refer to the long-term closing line charts presented here recently in conjunction with this view below. 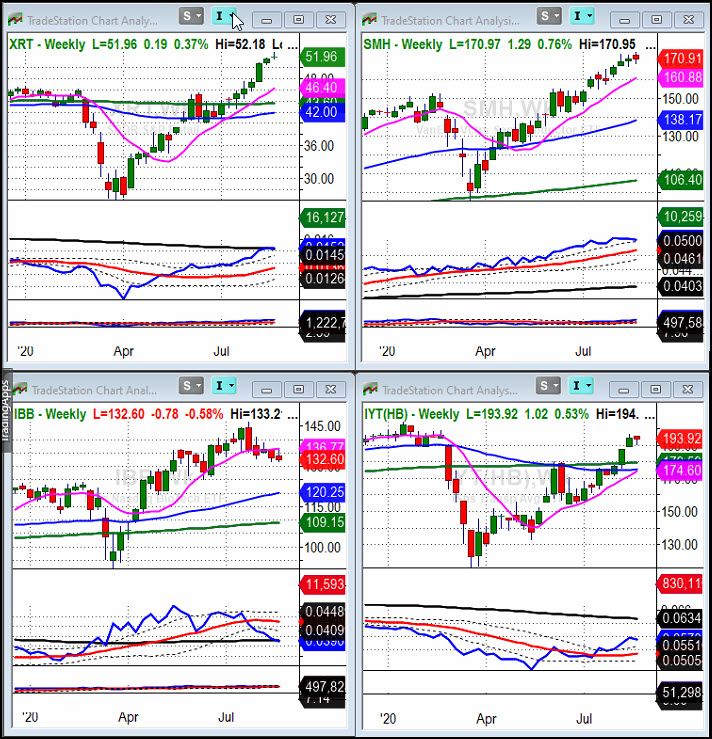 In the chart above, take note that SMH is still quite strong on a weekly basis, so a correction on a daily basis isn’t an obvious long term top.

As we’ve been saying for weeks, XRT has been incredibly strong. This suggests that there could be cyclical strength too replace technical weakness when the market rotates.

Another example of this is the strength in IYT.

Biotech, IBB, has been weak for weeks, but what you can’t see in this chart is that it’s sitting on the support created by its previous long term swing highs from 2015. This will be bullish if it turns higher, however, right now, the daily trend is down, and it’s daily and weekly triple play price leadership measure is bearish.

I’m not counting on IBB to become a new bullish leader. 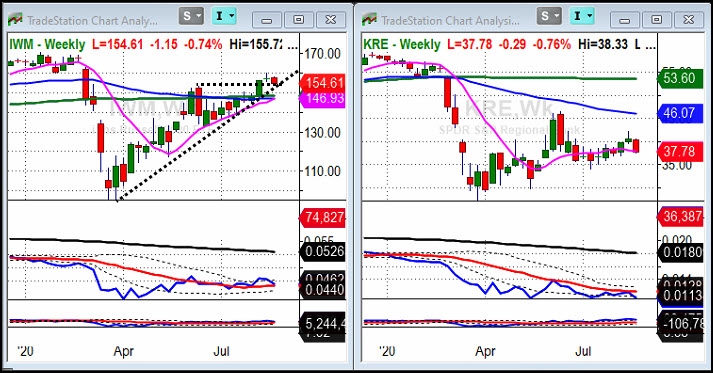 Lastly, as you can see in the chart above, retail banks, KRE, has not been doesn’t appear to be able to help out the bull’s cause.

So Grandpa Russell, IWM, will be left with a tough job to do if SMH rolls over.

As I began this article, IWM sits at good support created by the trendline from the March lows and the swing high on June 8th shown in the chart above.

Additionally, there are other areas of the market not shown here, which show signs of leadership and support for a further move higher by IWM.

Dow (DIA) Flag to under the 10 DMA turned up. If moves higher it to continue.

Nasdaq (QQQ) New high. 275 is a pivotal support area. 260 is key support level and a trendline.

TLT (iShares 20+ Year Treasuries) Edged up to close over 10 and 50 DMA and into resistance area at 166. OR breakout over today’s high could kick off a move higher. 165 is pivotal support then163 is next big support.

NEW DELHI: Inventure Grwth and Servotech Power Syst and others were among the stocks that touched their 52-week lows in today's trade. Domestic benchmark...
Read more