4 Inflation-Resistant Stocks to Buy This Summer

One of the underlying basics of the Elliott Wave Principle (EWP) is that the financial markets are self-similar at different degrees of trends, aka, waves. It is called “fractal.” Thus, patterns keep repeating themselves, but not exactly. That would be too easy. Markets function more along the lines of Mark Twain’s “history never repeats itself, but often rhymes.” Thus, it can be helpful to see if the current price action resembles that of the past to allow us to get an idea of what is likely next for the markets.

Several weeks ago, I informed my Premium Major Market Members that the S&P 500, since its low on the day of the U.S. presidential election in 2016 until now, strongly resembles the price pattern during the 1960s through early 1970s. See figure 1 below. I placed the “you are here” annotation back then. Several weeks later, and it is time to share my observations here. 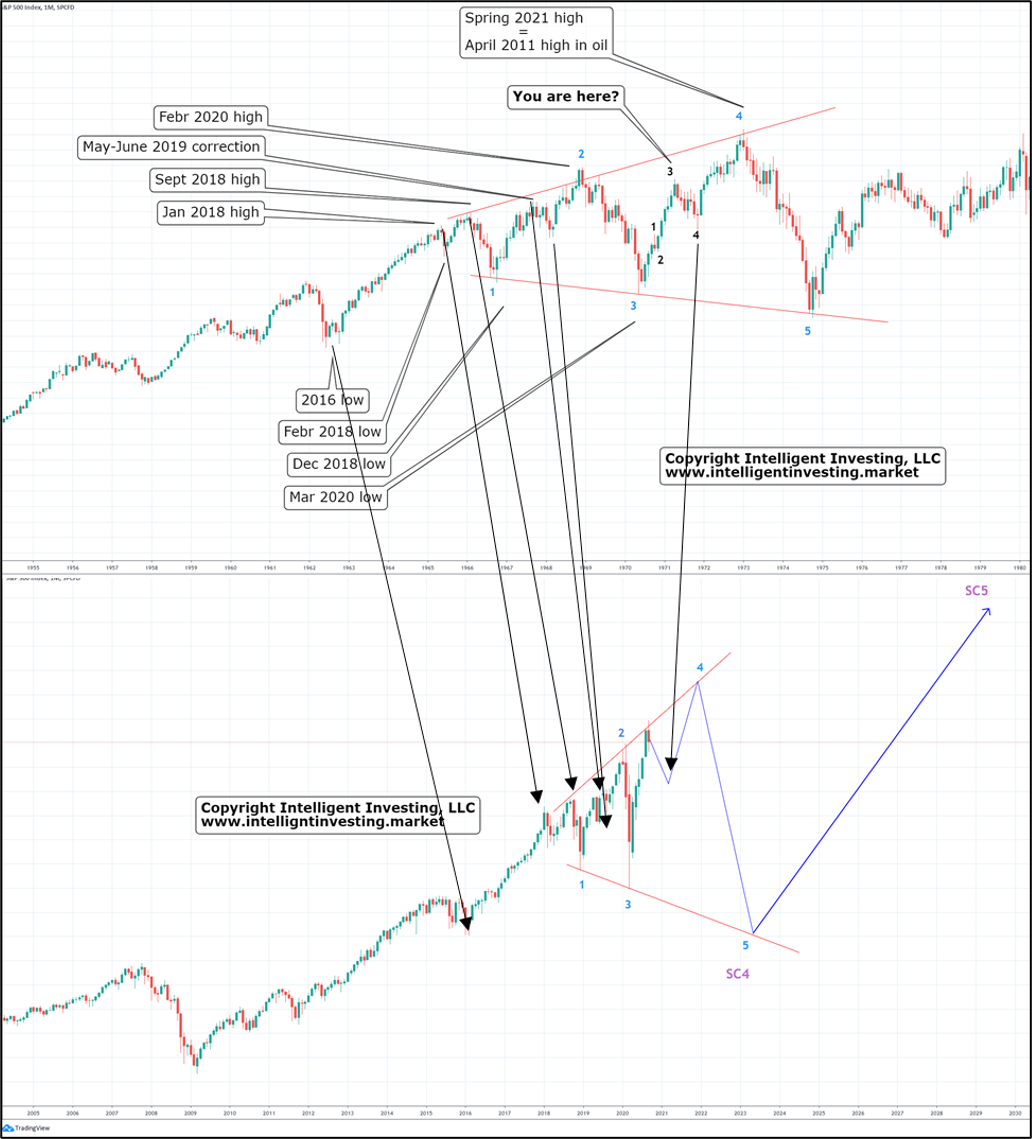 As you can see, the resemblances in price pattern/EWP waves are remarkable. The black arrows show the alignment of some of the smaller similarities, while the blue numbers show the important highs and lows then and now. Noteworthy is that the current market is apparently moving much faster than back in the ’60s and ’70s. Why that is, precisely, is unclear. But the why does not matter. The fact the fractal has been in place since 2016 is what matters.

Currently, the S&P 500 is correcting after its monster rally off the March 2020 low. This also happened in 1971. (Blue numbers 3.) Back then, after several months of correcting, the index went for the last bull run to blue 4 in late-1972 before erasing all gains by mid-1974 (blue 5). From then on, the S&P 500 went into a multi-decade bull. Thus, if the current fractal continues, and there is as yet no indication it will not, then the blue path for the current years can be expected to be taken: a multi-week correction followed by a rally into spring 2021 before all gains are erased: blue 4, 5.

This pattern matches with the average U.S. presidential election year patterns (see Figure 2 below). That pattern has, on average, a top in early-September, bottom mid- to late October, and then a rally. The S&P 500 topped Sept. 2. So far, so good. 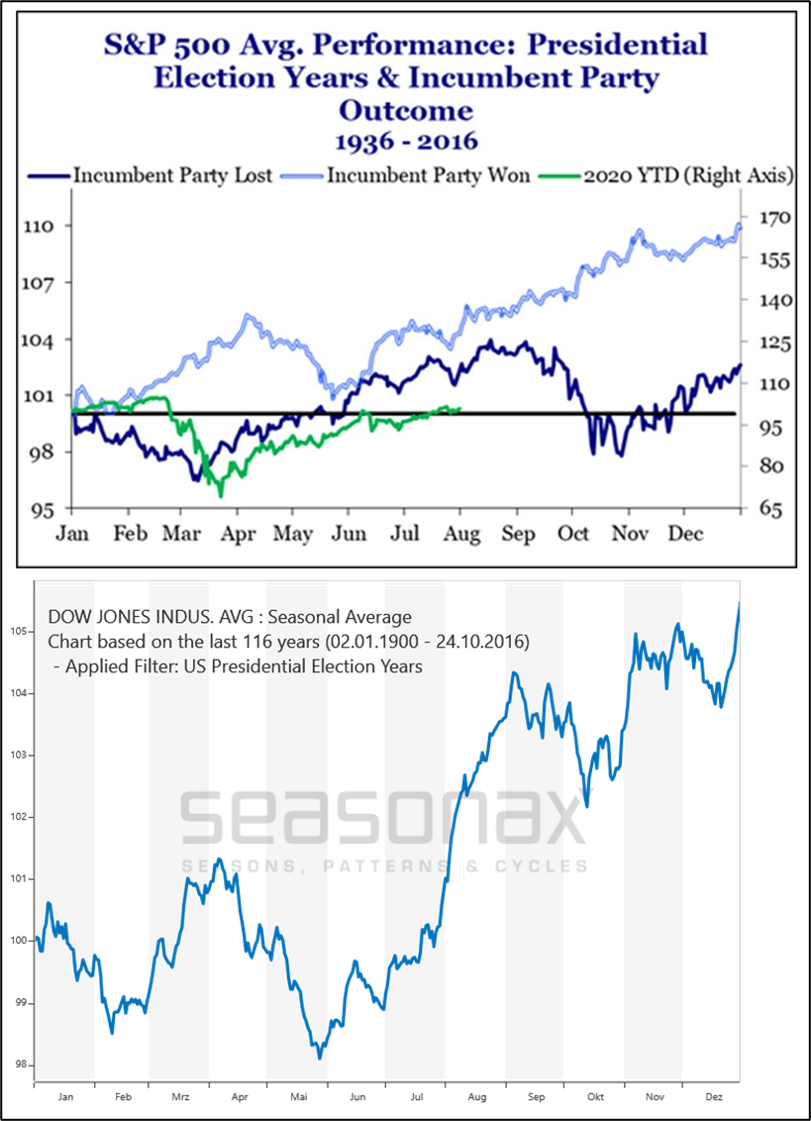 And the pattern is also matched with the fact crude oil appears to have a 10-year lead on the Dow Jones, which means that the Elliott waves seen in crude oil show up approximately 10 years later in the stock market [3]. McClellan points out this Oil-Dow Jones relationship has been working very well for more than 120 years, and that is for me long enough; it should be respected, continuously monitored for, and its imperfections accepted.

When you read McClellan’s post (hyperlink to post below), you will find crude oil prices peaked in April 2011, and then started a long ugly downtrend into February 2016 [3]. Thus, if the market is going to continue following oil’s previous path – and there is currently nothing to tell us it will not – then that should mean the top for stocks is due around April 2021, and there should be a bear market crash for stocks in 2024 [3].

Bottom Line: There is a fractal development in the S&P 500 between now and the 1960s-1970s. If the fractal continues to play out, it forecasts a correction for several weeks, a multi-month rally and then a severe multi-year bear market that erases all gains since the recent March 2020 low. The more current price action is supported by the average U.S. presidential election year pattern, and the outcome of the larger fractal is supported by the Oil-Dow Jones relationship discovered by Mr. McClellan [3]. Hence, there are several lines of evidence supporting the 1960-1970 path going forward. For me, that is good enough to pay attention to it over the coming weeks and months, and I will continue to update my premium major market members about its progress. I suggest you do the same.

4 Inflation-Resistant Stocks to Buy This Summer

Nifty traded in a range of 144 points and formed a bearish candle on the daily chart.
Read more
IndiaTimes Stocks

The headline index finally settled with a modest gain of 26.25 points (0.17 per cent).
Read more