NEW DELHI: Shares of Jet Airways, whose likely revival is in sight with NCLT approving a resolution plan, have lost more than half of...
Read more

GBP/USD fell to its lowest levels since July 28th on Wednesday, extending losses from the recent yearly high made on September 1st. The same day, the UK government published its Internal Market bill, outlining a plan to breach the pledges in the EU Withdrawal Agreement.

However, later in the session the pound recovered as the EU confirmed that it would not give up on efforts to reach a free trade deal. Sterling was also supported by the recovery in global equities.

Nancy Pelosi, the Speaker of the United States House of Representatives, warned that there is absolutely no chance of a US-UK trade deal passing Congress if the Good Friday Agreement is damaged. She stated: “Whatever form it takes, Brexit cannot be allowed to imperil the Good Friday Agreement, including the stability brought by the invisible and frictionless border between the Irish Republic and Northern Ireland.” She went on to say: “If the UK violates that international treaty and Brexit undermines the Good Friday accord, there will be absolutely no chance of a US-UK trade agreement passing the Congress.”

As fears of a no-deal Brexit rise, other fundamental factors also weigh on sterling, such as the fact that the UK is suffering the worst recession of any G7 country. GDP contracted by a record 20.4% in the second quarter, roughly double the decline seen in the US and Germany.

Looking at the GBP/USD daily chart, we can see that price currently hovering around the key psychological level of 1.30. Trendline resistance sits above, while bears look to the 200-period simple moving average below for potential support. 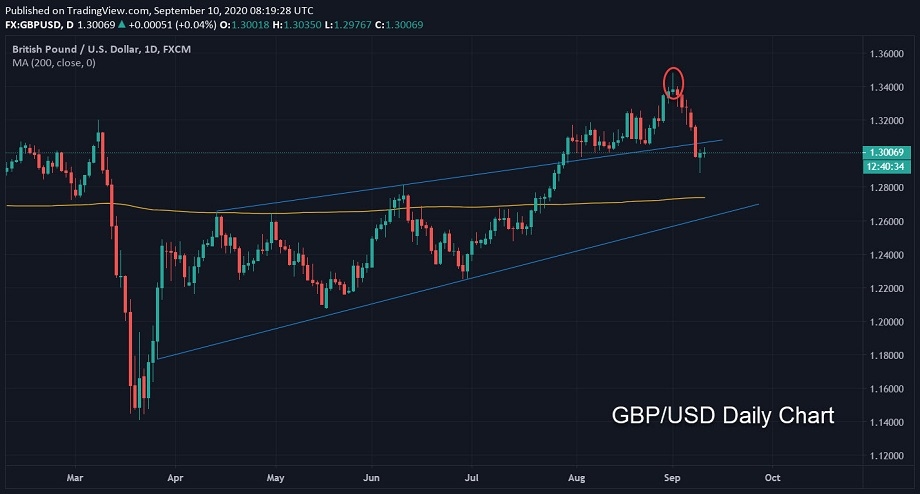 NEW DELHI: Shares of Jet Airways, whose likely revival is in sight with NCLT approving a resolution plan, have lost more than half of...
Read more
Investing News

The 2 Best Pharma Stocks to Buy on Dips

NEW DELHI: Shares of Jet Airways, whose likely revival is in sight with NCLT approving a resolution plan, have lost more than half of...
Read more
IndiaTimes Stocks