The European Central Bank tapered its asset purchases. Only that it didn’t taper at all. Are you confused? Gold isn’t. It simply doesn’t care.

Tapering has begun. For now, in the Eurozone. This is at least what headlines suggest, as last week, the governing council of the European Central Bank held its monetary policy meeting. The European central bankers decided to slow down the pace of their asset purchases:

Based on a joint assessment of financing conditions and the inflation outlook, the governing council judges that favourable financing conditions can be maintained with a moderately lower pace of net asset purchases under the pandemic emergency purchase programme (PEPP) than in the previous two quarters.

The financial markets were only slightly moved by the ECB’s action. The price of gold also barely changed, as the chart below shows. One reason is that such a step was widely expected. Another one is that this “tapering” is actually “pseudo-tapering,” or not tapering at all. Why? 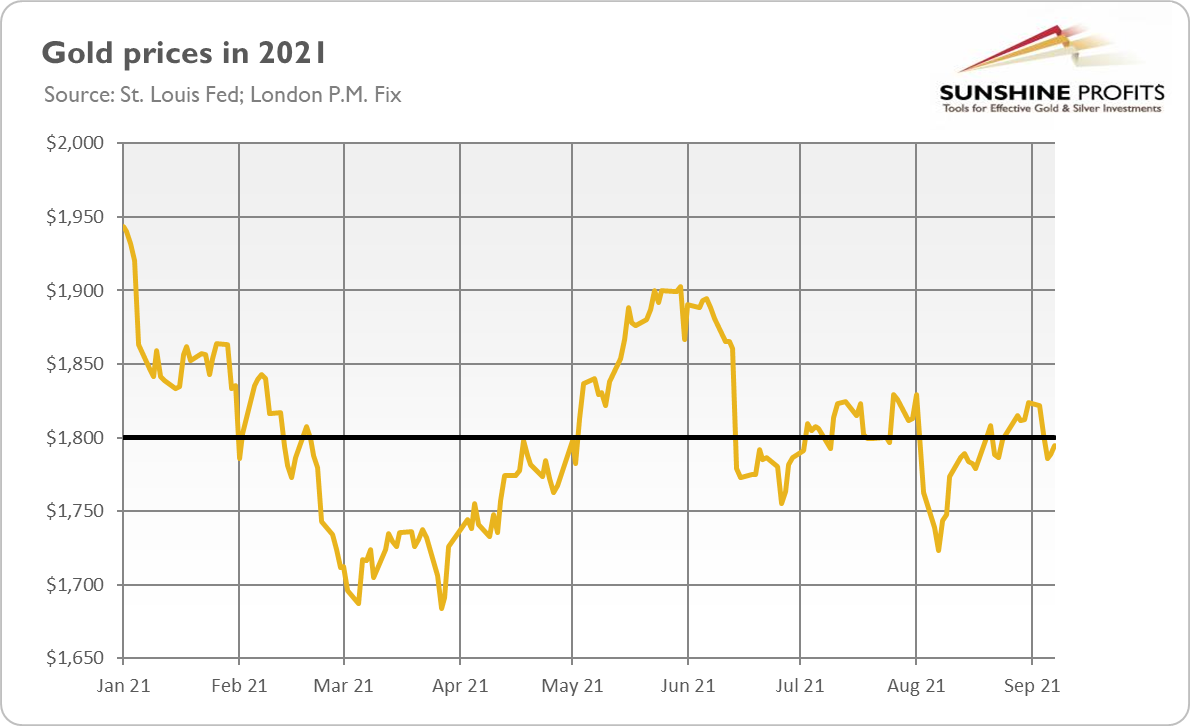 The answer is: the ECB will continue to conduct net asset purchases under the Pandemic Emergency Purchase Program, with an unchanged total envelope of EUR1,850 billion. So, the total number of assets bought under this program won’t necessarily change, as the ECB could still spend all of the envelope. Only the pace will slow down, but please remember that it was boosted earlier this year. Hence, even Christine Lagarde admitted during her press conference that the ECB’s move was rather a “re-calibration of PEPP for next three months” than tapering.

What’s more, the net purchases under the Asset Purchase Program, the original quantitative easing program, will continue at an unchanged pace of EUR20 billion per month. Last but not least, the ECB left its interest rates unchanged. And it reiterated that it was not going to normalize interest rates any time soon, even in the face of strong price pressure. In other words, the ECB signalled once again that it would tolerate higher inflation:

In support of its symmetric 2% inflation target and in line with its monetary policy strategy, the governing council expects the key ECB interest rates to remain at their present or lower levels until it sees inflation reaching 2% well ahead of the end of its projection horizon and durably for the rest of the projection horizon, and it judges that realized progress in underlying inflation is sufficiently advanced to be consistent with inflation stabilizing at two percent over the medium term. This may also imply a transitory period in which inflation is moderately above target.

What does the ECB’s last meeting imply for gold?

Well, although Lagarde and her colleagues didn’t signal any further reduction of monetary accommodation, the slowdown in asset purchases under PEPP is a small step toward normalizing the monetary policy after the pandemic.

Additionally, please note that the ECB’s September economic projections boosted both the expected pace of the GDP growth and inflation in the coming years, which should provide the bank more room for hawkish actions. In this context, the ECB could be seen as a shy harbinger of the withdrawal of emergency measures introduced during the epidemic. This is probably why the euro has strengthened slightly after the ECB meeting.

However, the ECB remained very dovish, in fact. It will just reduce the pace of asset purchases under PEPP, which was boosted earlier this year. And the European central bankers didn’t provide any timeline, nor any clues about the possible end of its quantitative easing programs. The Fed will also likely maintain its very accommodative stance, especially given the spread of the Delta variant of the coronavirus and the disappointing August nonfarm payrolls.

Having said that, the recent comments from the Fed officials suggest that they are determined to start or at least announce tapering by the end of the year. For instance, St. Louis Fed President James Bullard said in an interview that “The big picture is that the taper will get going this year and will end sometime by the first half of next year”.

Hence, the big picture for gold remains rather negative, as the prospects of the Fed’s tightening cycle could still exert downward pressure on gold. However, the actual beginning of the process, especially if accompanied by more dovish signals from the Fed than expected, could provide some relief for the yellow metal, in line with “sell the rumor, buy the fact”. My intuition is that 2022 may actually be better for gold than this year, but a lot will depend on the future economic developments, as well as the US central banks’ actions and communication. This week we will get fresh CPI data, and the FOMC will gather next week. Stay tuned!

The Energy Report: Battling Back

After a challenging 2020 due to the pandemic, foreign direct investment (FDI) has been flowing into Russia this year for several reasons. Among them...
Read more