Share’s of Tillys (NYSE:TLYS) went on a wild ride following the 2Q earnings release. The news wasn’t all that great, not compared to what we’ve seen from other retailers, but when you dig into the numbers the investment picture becomes clearer. And attractive. Which is why shares were up and down 5% in after-hours trading.

The mitigating factor for Tilly’s is the timing of its Reopening. Tilly is a destination location so heavily dependent on its brick&mortar presence. The company began the quarter with all of its 238 stores closed and only reached 98% late in the period. California is the sticking point, mall closures in that state kept the final 2% of stores from reopening, but even that headwind has resolved itself.

I don’t mean to imply Tilly’s business is back to what it was because it isn’t. The point is that business is rebounding and there are signs of long-term health in the company. For one thing, despite its appeal as a destination location for teen and young-adult brands, the company has seen a marked uptick in its eCommerce business. eCommerce in the second quarter grew 127.8% on a YOY basis and accounted for 39% of sales. If the company can build on that momentum I think it’s future is all but assured.

Tilly’s second quarter wasn’t great, the COVID shutdowns had a significant impact on the business, but the reopening has been strong and results are encouraging. Revenue fell -16% for the quarter, up from the -40.7% posted in the 1st quarter, and a hair better than the consensus. Bottom-line results were more impressive, the company’s GAAP EPS beat consensus by $0.33 to produce a surprise profit. Brick&Mortar locations accounted for 61.7% of sales.

Margins declined by 130 basis points but there are mitigating factors that are already correcting themselves. The biggest drag on margins was the deleveraging of occupancy costs due to the closures. We know that 100% of stores are open now so that impact will be much less in the current quarter and moving forward. Shipping costs associated with eCommerce were also a factor but to a much smaller degree. In the long-run, I want to see those costs go up as the company shifts to a more-digitized model. Those costs were offset by the strong-selling of regular priced and less-discounted items.

The company did not offer any formal guidance but it did give an update on August sales. August sales are down 35% from the previous quarter and may indicate weaker sales all quarter. The caveat is that most of the difference is due to a weak back-to-school push, after the first two weeks of the month spending trends returned to more normalized levels. Based on the results from other retailers, I expect to see Tilly’s 3rd quarter results in-line if not above last year’s levels. Shoe Carnival (NASDAQ:SCVL) is the one that stands out.

Tilly’s Is A Dividend Payer But There Is Risk

Tilly’s is a dividend payer and has yet to offer any indication it won’t pay a distribution this fiscal year. The situation is interesting because the company pays out on an annualized basis and, based on the last payment, yields about 14%. The company is well-capitalized and has virtually no debt so it could easily pay the dividend but I wouldn’t hold my breath just yet. Company execs say they have enough cash for at least the next 12 months but that may include cash-hoarding activities ie not paying a dividend. Assuming this year’s 2nd half is comparable to last year the $1.00 annual payout is still twice the expected EPS. At best, the company should be expected to pay a smaller distribution but it could surprise me.

The Technical Outlook: Tilly’s Is On The Verge Of Melt-Up

Tilly’s business is turning a corner in terms of the pandemic effect and the stock is ready to move up to new highs. The premarket action sparked some volatility but it settled down at a level just below the post-pandemic high where it looks like the bulls are in control. A move up to a new high would be a trigger for entry but more cautious traders may want to wait for a close above resistance before committing money. Once resistance is broke I think this stock will move up in a couple of quick rallies to hit $8, $9, and $10 by the end of the year. 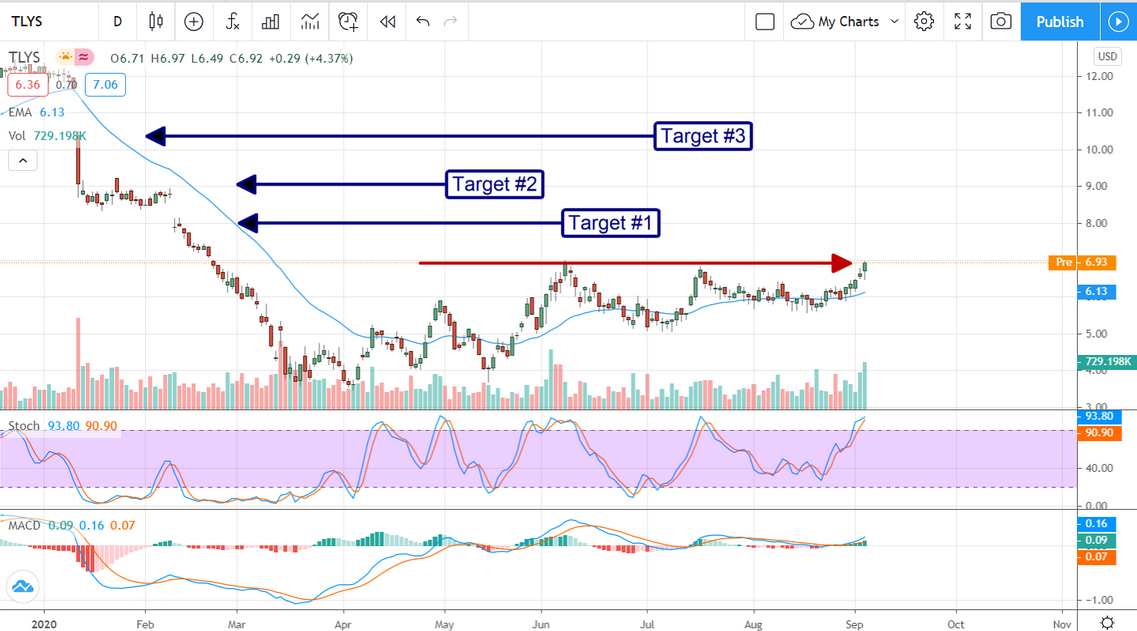