With so much attention being paid to Apple Inc (NASDAQ:AAPL) reaching a valuation of $2 trillion, I decided to see if AAPL’s market cap would make it into the IMF’s list of the world’s richest countries based on GDP.

In fact, it does!

Can you guess its rank?

And for a little more color on the list, which of the following countries had 2019 GDP of less than $2 trillion?

We’ll get to the answer shortly.

The other big number of the day was in Target’s earnings release.

That’s the kind of action we want to see after good news.

NVIDIA Corporation (NASDAQ:NVDA) reported its earnings after the bell, as of 5:30 EST the news has been good but the action has been a bit disappointing. It’s too early to make a judgment, so keep an eye on this one today.

If NVDA gets weak today, SMH is likely to slide, and potentially more than the bulls would like to see. Unfortunately, a subtle bearish pattern has been developing in the SMH over the last 10 days despite is a leadership position.

It will be interesting to see if the rest of the market can hold up if there is real weakness in SMH.

Despite, and consistent, with the pattern in the SMH, yesterday’s market seemed to be content to grind higher into new high territory until the Fed released its minutes from the last meeting.

Unfortunately, the Fed’s minutes sent TLT significantly lower which also led to a sell-off in gold and stocks.

As I highlighted in last week’s Market Outlook, the recent correlation between GLD (NYSE:GLD) and TLT is worth watching if your trading either of those assets.

Additionally, the bulls in stocks don’t want to see stocks falling with falling bonds. That’s not a healthy sign for stocks. If bonds fall because of growth concerns, that should be good for stocks. Other concerns, however, may not bode well for stocks.

Yesterday is only one intra-day move, and GLD seems to have more to worry about than stocks with respect to bonds for now, but keep an eye on this market message especially if the SMH continues to get weak.

The pattern I referred to earlier in SMH is staring at you in yesterday’s image. Notice that since the circled doji pattern…

Despite the fact that SMH has moved up, 8 of the last 10 days in SMH have closed lower than they opened. That sounds like quiet selling of a leading group to me. For now it’s consolidation, but if it moves lower, it’s distribution. 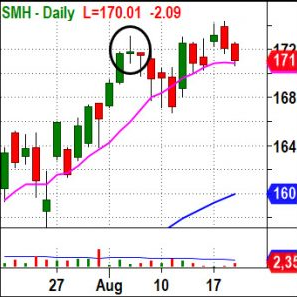 To end on a positive note, APPL would rank #8 if its $2 trillion market cap was GDP (which it’s not, but it’s still a big number).

More interestingly, ALL four countries listed above would fall under it in the order their listed.

In the market, perspective is important.

Nasdaq (QQQ) New high but closed later. 275 is a pivotal area. 260 is a key support level and a trendline.

Has Zillow’s Collapse Signaled A Warning For The Capital Markets? Part 2