The accounts of some of the most prominent US political and business leaders, from and to Jeff Bezos and Warren Buffett, were hacked on Wednesday in an apparent effort to promote a scam.


Others whose accounts were caught up in the security incident included Bill Gates, Elon Musk, Kanye West, Inc, Apple, and Michael Bloomberg, the founder of Bloomberg LP. The accounts sent out tweets promising to double the money of anyone sending funds via within 30 minutes.

As the hack unfolded, verified accounts suddenly lost the ability to post new tweets. “You may be unable to tweet or reset your password while we review and address this incident,” wrote. Its shares fell 6 per cent in pre-market trading in New York on Thursday. The stock was down over 3 per cent in intraday trade.


Within hours, Twitter said access had been restored for most accounts and later added what it knew from its investigation so far. The firm said the hack had targeted employees with access to internal systems and tools, which were then used to take control of high-profile accounts. So far, the address tweeted by the hackers has been sent over 12 Bitcoins, worth over $110,000. Bitcoin exchange, Coinbase, has blocked users from sending money to the address.


Some of the accounts that were targeted said they used two-factor authentication and strong passwords. The tweets indicate they were posted using Twitter’s web application, sparking theories online that the hack may be internal to Twitter, or a service used to manage accounts.


The breach prompted a swift response from lawmakers. US Senator Josh Hawley asked that Twitter CEO Jack Dorsey immediately reach out to the US Department of Justice and the Federal Bureau of Investigation.


Exactly what happened, however, remains unclear. 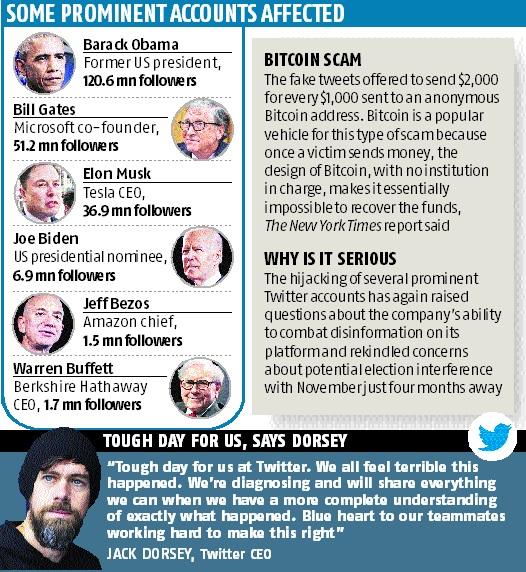 Standard Life to sell 5% stake in HDFC AMC on Wednesday

MUMBAI: UK's Standard Life, one of the promoters of HDFC Asset Management Company, is looking to sell up to 10.6 million shares of the...
Read more