Unemployment Rate Drops. Will It Drag Gold Down?

Denmark stocks lower at close of trade; OMX Copenhagen 20 down 1.19%

The U.S. labor market improved in August, although headlines paint too rosy a picture. What does it all mean for the gold market? 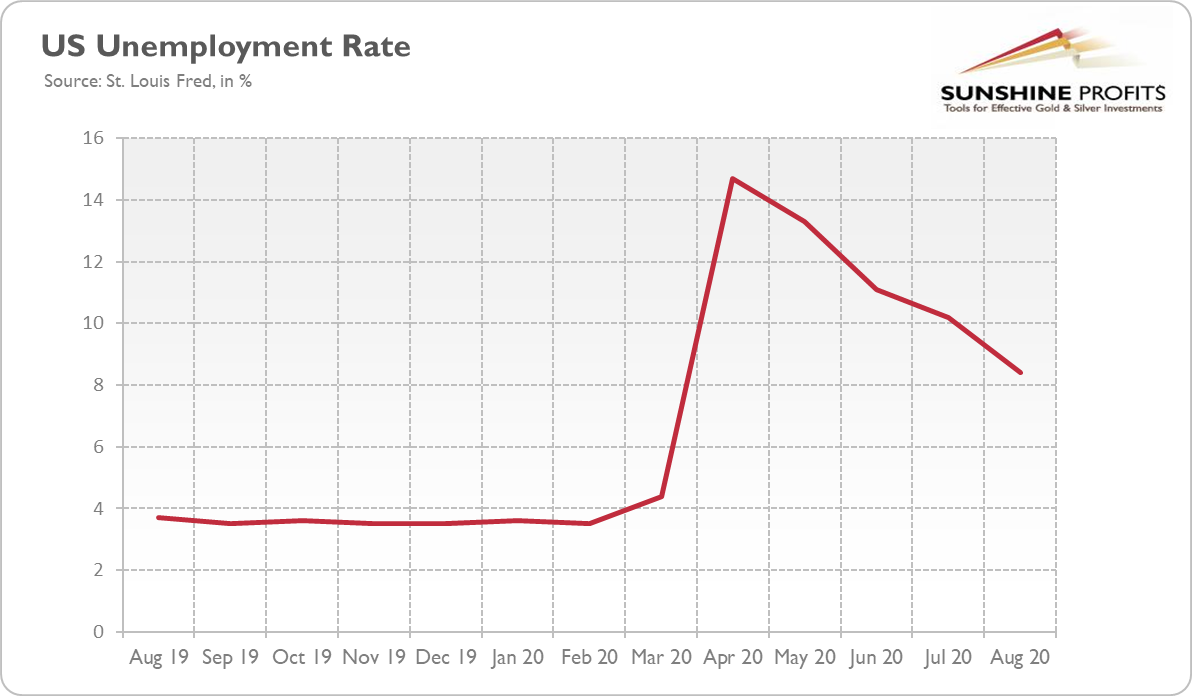 The headline numbers are, thus, negative for the gold market. They reflect improvements in the labor market and the continued recovery of the economic activity from the coronavirus crisis and the Great Lockdown.

However, when we dig deeper, we would see a less rosy picture. First of all, as one can see in the chart below, the pace of the U.S. employment growth has seriously slowed down from gains of 2.7 million, 4.8 million, and 1.8 million in May, June and July, respectively. It indicates that the nonfarm payrolls are clearly losing momentum. 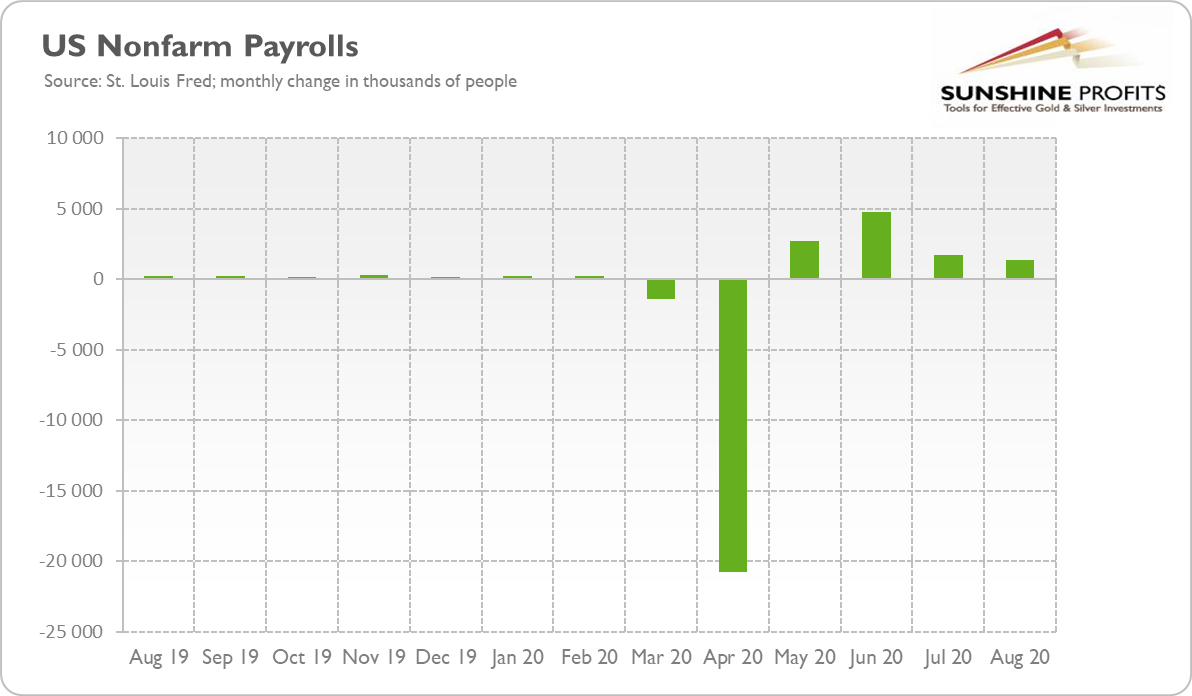 Moreover, the 238,000 jobs were created only temporarily due to the Census 2020. And we cannot forget that the unemployment rate remains relatively high, especially when compared with a 3.5 percent rate before the outbreak of the epidemic. So, there is still a long way to get back to the pre-COVID levels and trajectory.

Another example showing that investors should always take headline numbers with a pinch of salt, are the initial jobless claims. They fell sharply by 130,000 to a seasonally adjusted 881,000 in the last week of August (see the chart below), but the decrease was caused by a methodological change in how the data is adjusted to account for seasonal swings in employment. 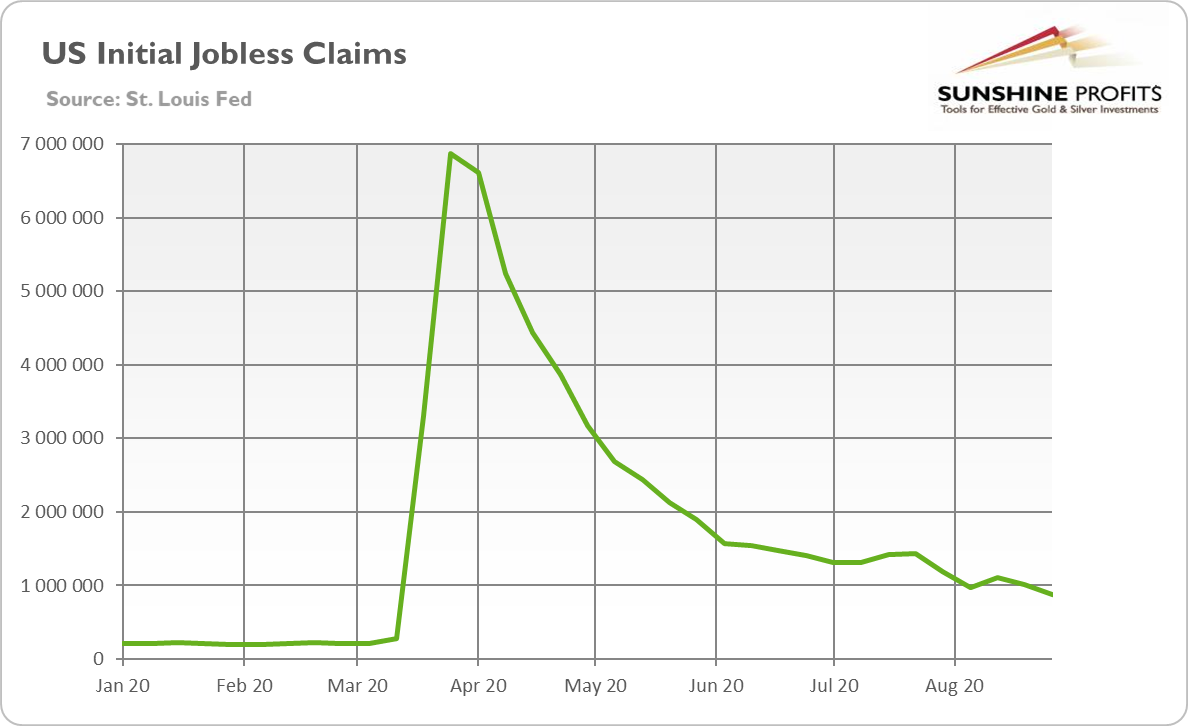 What does it all imply for the gold market? Well, the decline in the unemployment rate is negative for gold prices, as it could restore confidence in the vigorous economic rebound. Indeed, the price of gold declined initially in response to the release of the Employment Situation Report.

However, the fact that the U.S. job growth slowed further in August is worrisome. The slowdown shows the fragility of the current economic recovery and puts its stability into question without the new government’s fiscal stimulus package. The uncertainty about the pandemic and economic recovery should maintain the demand for gold as a safe-haven asset and a portfolio diversifier.

So, in the short-term, the correction in the gold market could continue. The inability of gold to rally after the Fed announced its dovish change in the inflation-targeting regime looks bearish and may indicate that gold has already priced in a more inflationary Fed. The improved epidemiological situation and economic recovery could also add some downward pressure on the gold prices.

However, the fundamental outlook for gold remains bullish. The monetary policy remains easy, while the real interest rates will remain ultra-low or even negative for years. The fiscal deficits and public debts are ballooning. In such a macroeconomic environment, gold should shine in the long-run.

And do not underestimate the power of the dovish side! After all, last week, the Fed acknowledged that the Philips curve is dead, so it will permit the economy to expand and inflation to increase to a higher level without the need to hike interest rates. In other words, the Fed promised to keep the federal funds rate near zero for a few more years without worrying about inflation. As it has become even clearer that the Fed is more concerned about the weak economy than inflation, we are even more certain that the real interest rates will remain at ultra-low levels for years, which will continue to push investors toward gold.

Disclaimer: Please note that the aim of the above analysis is to discuss the likely long-term impact of the featured phenomenon on the price of gold and this analysis does not indicate (nor does it aim to do so) whether gold is likely to move higher or lower in the short- or medium term. In order to determine the latter, many additional factors need to be considered (i.e. sentiment, chart patterns, cycles, indicators, ratios, self-similar patterns and more) and we are taking them into account (and discussing the short- and medium-term outlook) in our Gold & Silver Trading Alerts.

Denmark stocks lower at close of trade; OMX Copenhagen 20 down 1.19%

Kotak Securities We again witnessed a sharp decline in the market on Thursday mainly due to the sudden jump in the long-term bond yields in...
Read more
IndiaTimes Stocks