Global markets will go into overdrive next week, with two central bank meetings and a landslide of data coming up. The RBA will probably reverse its tapering plans amid extended lockdowns in Australia, whereas the Bank of England might strike a slightly more optimistic tone. Of course, the main event will be the US jobs report, which will determine how quickly the Fed dials back stimulus.

Fears that the Federal Reserve might announce a slowdown of its massive asset purchases in August subsided this week after Chairman Powell stressed that the labor market still hasn’t recovered properly. The dollar moved lower in the aftermath as real US yields fell to new record lows, with the markets clearly pricing out the risk of an imminent taper.

That said, the overall message wasn’t so dovish. The Fed highlighted that the economy has made progress towards its goals and Powell even said “we are clearly on a path to a very strong labor market”. He also dismissed the Delta variant as being a major risk and suggested that inflation might head even higher in the near term, before cooling later on. 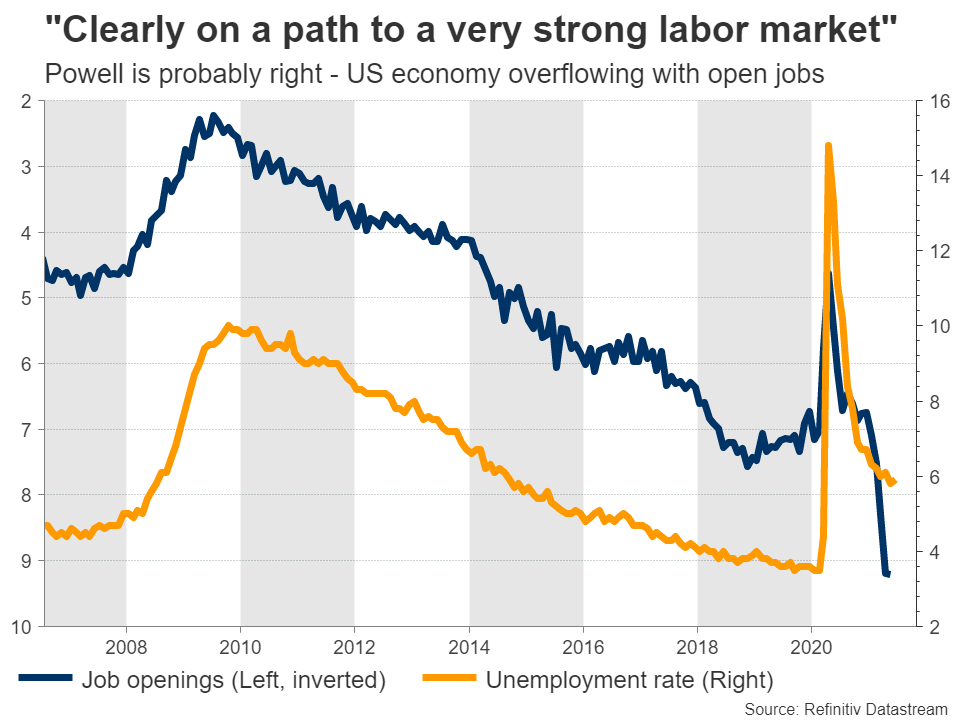 The bottom line is that August may be too early for a tapering announcement, but September is still in play. The Fed can examine another two employment reports by then to make sure the labor market is strong and Congress could deliver another round of spending on infrastructure. Ultimately, this argues for a stronger dollar, especially against the euro and yen as neither the ECB nor the BoJ will follow the Fed anytime soon.

Considering all this, the upcoming US employment report on Friday will be absolutely critical for how the dollar performs. Nonfarm payrolls are expected to clock in at 926k in July, pushing the unemployment rate down two clicks to 5.7%. It seems like many people are returning to the jobs market now that the generous unemployment benefits have started to expire.

The US economy is still missing some 6.7 million jobs to recover completely. However, many people decided to retire once the pandemic hit, around 3 million by some estimates. Therefore, America might only be missing around 4 million jobs for a full recovery, which means we might be back at full employment by the end of the year at this pace! 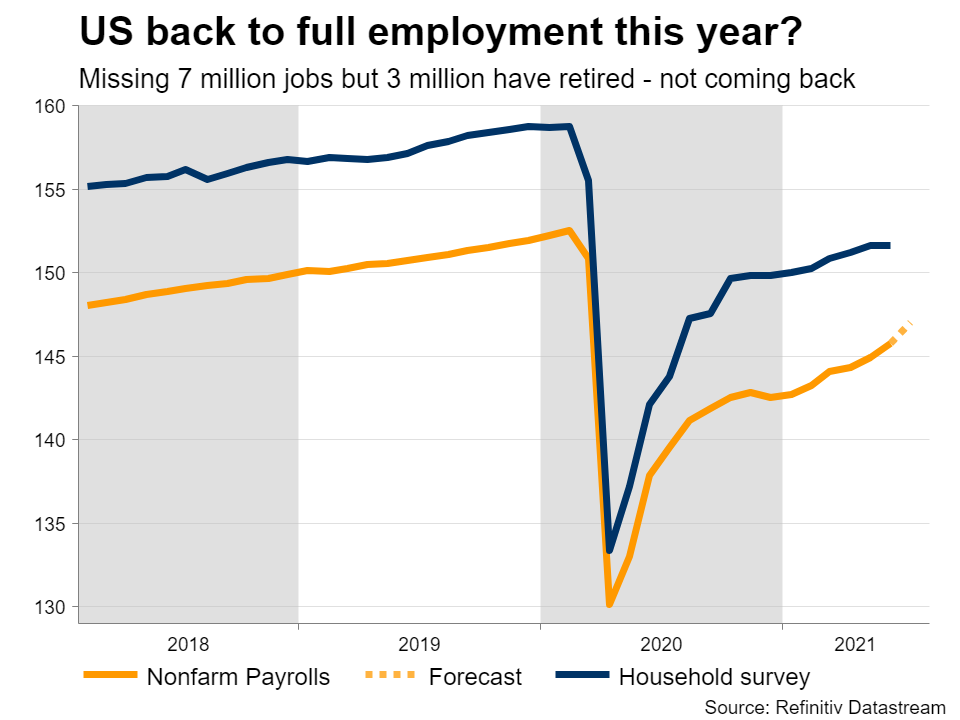 Ahead of Friday’s jobs numbers, the ISM manufacturing PMI will hit the markets on Monday, before the services index is released Wednesday.

The Reserve Bank of Australia meets on Tuesday and it might be forced to abandon its plans to trim asset purchases. Just four weeks ago, the RBA said it would slow down its purchases of government bonds as the economy was much stronger than it had expected.

Things have changed dramatically since then, with much of Australia trapped in a lockdown to fight the Delta variant. The economy is headed for a contraction this quarter that will cost many jobs, canceling out much of the earlier progress in the recovery.

Hence, the RBA will probably strike a very cautious tone next week. Policymakers have long stressed that bond purchases can always be increased again if the economy weakens, and now would be a great time to demonstrate this flexibility. 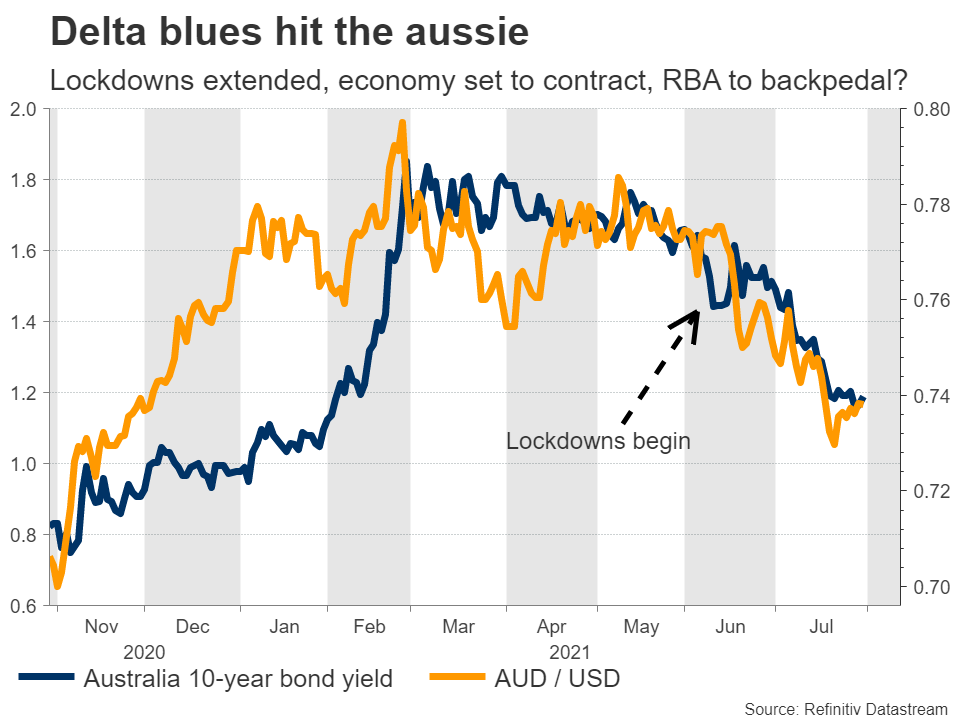 If the central bank indeed abandons its taper plans and signals that bond purchases won’t slow down after all, that could hammer the aussie lower.

BoE: Neutral, with an optimistic flavor

On Thursday, the central bank torch will pass to the Bank of England. A couple of BoE officials made headlines recently after they called for withdrawing some stimulus.

Inflation is already running hot and they fear that unless the Bank takes its foot off the accelerator soon, this could start to infect inflation expectations and become more permanent. If enough people expect higher inflation moving forward, then it becomes a self-fulfilling prophecy because people take actions based on that.

However, the rest of the Committee doesn’t really share this view. Most members have been adamant that withdrawing stimulus too early would be an even bigger risk as it could hurt the recovery, especially now that the government is phasing out its job-supporting programs. 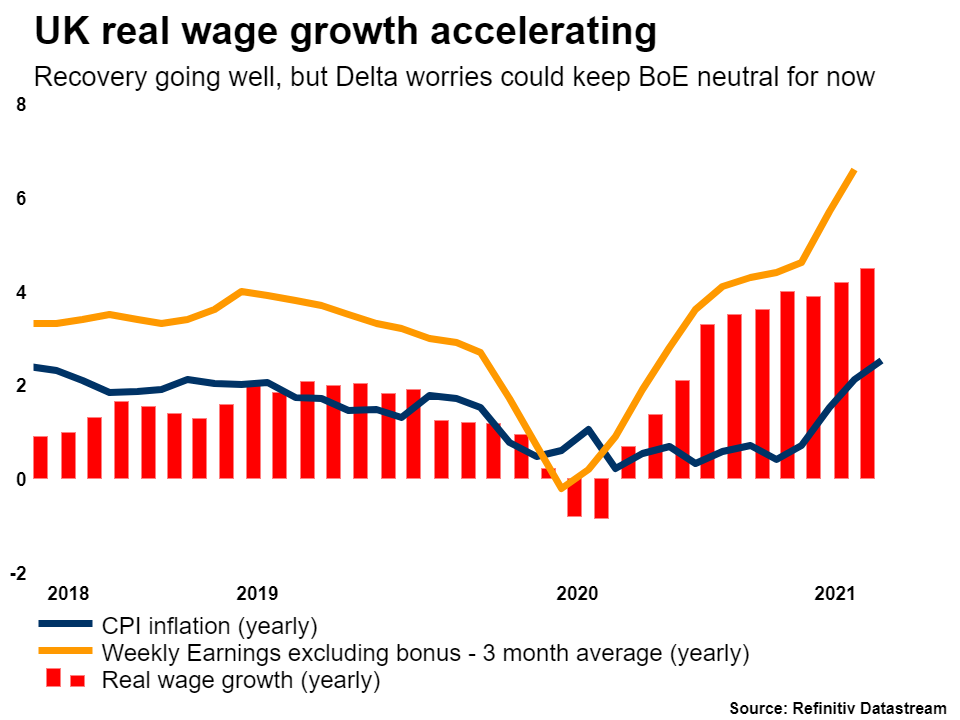 As such, the most likely conclusion is the BoE signaling that the economy is doing better, but that it is too early to withdraw any stimulus for now. Saunders and Ramsden might dissent, calling for an immediate withdrawal.

The pound has staged a phenomenal comeback in recent days and the outlook remains bright. The UK enjoys one of the highest vaccination rates globally and the BoE will probably be among the first central banks to raise interest rates this cycle. Markets are currently pricing in a 15bps rate increase for June next year, which seems reasonable.

Beyond America, employment data will also be released in New Zealand and Canada. This will be the last major data point before the Reserve Bank of New Zealand meets in mid-August, where markets are pricing in a 55% probability for a rate increase.

Hence, this dataset will shape market expectations ahead of this meeting, driving the kiwi as traders position accordingly. Forecasts point to a solid report, with the unemployment rate set to fall further. If that’s the case, markets could become more confident about an immediate rate hike, breathing some life back into the kiwi. 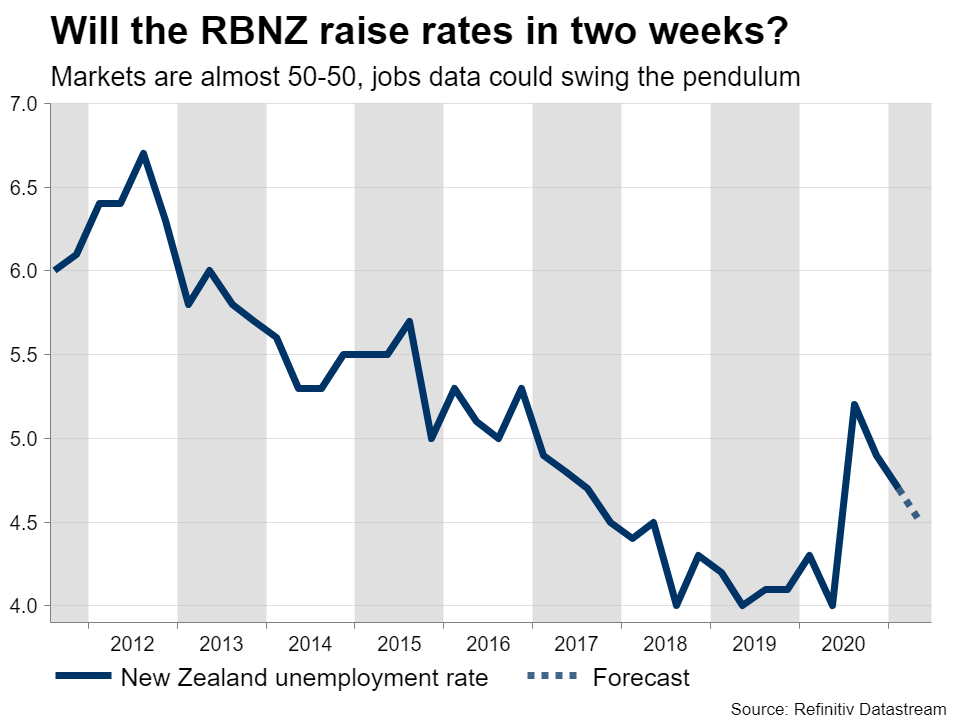 In Canada, jobs numbers for July will hit the markets on Friday. The Bank of Canada trimmed its asset purchases once again at its last meeting, encouraged by a strong economy and widespread vaccinations. The Bank remains on track to end its QE program completely by year-end. Coupled with high oil prices, the outlook for the loonie seems bright.

Over in China, the manufacturing and services PMIs for July will be in the spotlight on Monday and Wednesday, respectively. The economy seems to be losing steam, so these will be closely watched.

Finally in Europe, it’s a relatively quiet week. Retail sales for June are out on Wednesday, before the minutes of the latest ECB meeting on Thursday. Markets don’t pay much attention to either, but the minutes could be interesting as this was the meeting when the ECB committed to negative rates for longer.

Week Ahead – Fed to headline jam-packed week for central banks