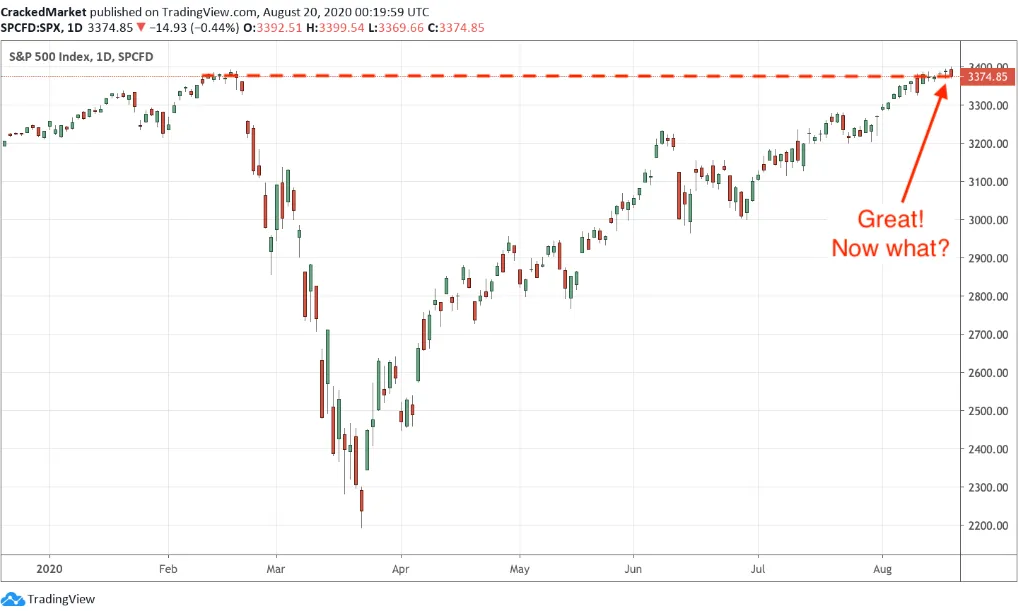 The S&P 500 slipped modestly following Tuesday’s record close. There were not any definitive headlines driving yesterday’s weakness, instead, this was nothing more than a little profit-taking and “selling the news” after Tuesday’s push to all-time high.

One day up, the next day down. That’s what markets do. But as long as we keep experiencing more up than down, this rebound remains alive and well. For months I’ve been saying markets go where people are looking. That little quirk made this unthinkable rally possible despite the greatest health crisis of our lifetimes.

Does it make sense? Of course not. But anyone who’s been doing this for a while knows the market doesn’t always make sense. In fact, more often than not, it does the exact opposite of what most people expect, hence why contrarian investing is such a successful strategy.

Unfortunately, with yesterday’s record close, the crowd is no longer fiated on a singular level and figuring out what comes next is a little less clear. But as is always the case, there are three possibilities; up, down or sideways.

Down is the most widely anticipated outcome given the dreadful economic environment surrounding us. But paradoxically, that’s exactly why down is the least likely outcome over the near-term. Everyone knows the economy is dreadful. (Duh!) But if confident equity owners refused to sell those headlines last quarter, last month, and last week, why would anyone assume their mood changed all of a sudden?

Confident owners remain stubbornly confident and that isn’t going to change anytime soon. If they were not fazed by the sharpest economic decline since the Great Depression, I cannot think of anything more spectacular that will finally convince them to abandon ship.

Up, that’s a strong possibility. Momentum is a very real thing in markets because people love joining the herd, especially when that herd is making money. But given how far, consistently, and slowly this rebound has been traveling, everyone’s seen this move coming from a mile away.

If a person wanted to buy this rally to all-time highs, they already bought it. While that buying was enough to get us here, I don’t expect there will be enough to keep us going for a whole lot longer.

My best guess is momentum carries us higher for a week or two before prices settle back and consolidate near 3,400 for a month or two. From there, it all depends on how the fight against the virus progresses this fall. A big second wave and stocks will slump. If the situation remains status quo, then stocks will continue edging higher into year-end. (With some obvious and temporary volatility surrounding the election.)

But most people don’t care why the market is doing what it is doing, what they really want to know is how to trade it. That’s easy, keep doing what has been working.

That means holding for higher prices and keep moving our trailing stops up, now spread between 3,320 and 3,360. If prices race higher in an unsustainable way, I’ll consider locking in some profits proactively ahead of a pullback to 3,400 support.

But more important than anything is protecting the mountain of profits we collected this summer. Remember, we only make money when we selling our winners.