The U.S. trading week begins with a fresh dose of red ink hanging over the major asset classes from last week’s sell-off. With the exception of foreign corporate bonds and investment-grade fixed-income in the U.S., all flavors of global markets lost ground last week (through Sep. 4), based on a set of proxy ETFs.

The deepest setback: U.S. equities. Vanguard Total Stock Market Index (NYSE:VTI) slumped 2.4%. The loss marks the fund’s first weekly decline since late-June and so the setback was arguably overdue. Even after the selling, VTI remains less than 5% under its record close, which was set on Sep. 2.

Despite the slide, BlackRock’s head of the firm’s global asset allocation, Rick Reider, predicts “the market is going to keep going higher.”

Jonathan Bell, chief investment officer at Stanhope Capital, thinks US equities are in a bubble, but he doesn’t expect it will pop anytime soon. He added:

“I would be saying to people that this is a bubble-type territory, but it doesn’t mean that it is going to deflate now. What we have seen in the last week or so is only an unwinding of the rise of the previous two weeks.”

The Global Markets Index (GMI.F) took a beating last week, which ended its bull run, at least for now. This unmanaged benchmark, which holds all the major asset classes (except cash) in market-value weights via ETFs, slumped a hefty 1.5%-the first weekly loss since late-June. 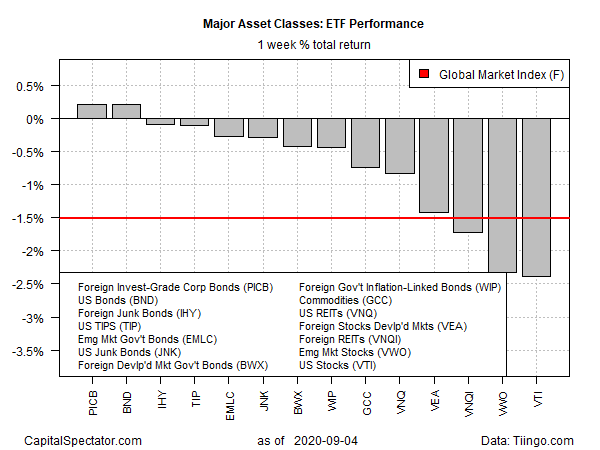 For the one-year trend, however, solid gains still dominate the performance landscape. US equities are still in the lead by a wide margin: VTI ended last week with a strong 16.6% total return for the trailing 12-month period.

The weakest one-year performance: foreign real estate (NASDAQ:VNQI) , which is down 9.9%. 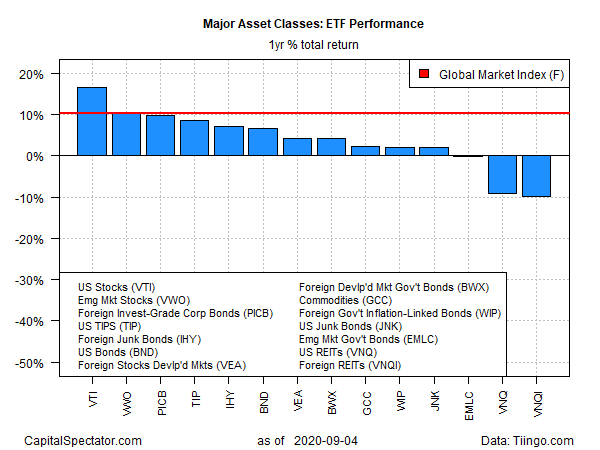 Ranking asset classes based on current drawdown continues to reflect a wide range of results for the major asset classes. Foreign corporate bonds have the smallest peak-to-trough decline at the moment: a slight -0.1%.

Meanwhile, the deepest drawdown is still found in broadly defined commodities via GCC, which ended last week’s trading at nearly 45% below its previous peak. 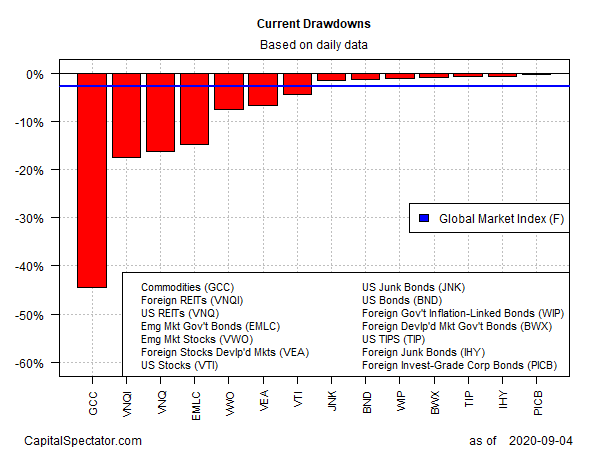