Will Oil Bears Take Crude Below $35?

NEW DELHI: Nifty50 snapped a three-day winning streak on Thursday, but managed to defend the crucial support at 15,000 level on a closing basis....
Read more

Even the oil bears may have been surprised by the crash in crude prices yesterday. The fall, when it finally arrived, was at such a velocity that investors who tried, unsuccessfully, to short the market since the oil price recovery in May, were probably a little dumbfounded.

Investors with a conservative view of oil, amid the worst pandemic in history and a jet fuel market that remains in shambles, might have found crude more acceptable at $35-$40 per barrel rather than $40 to $45.

The behavior of the oil market over the last four months has been clouded by euphoria rather than convincing statistics on the impact of business reopenings after the COVID-19 lockdowns of March this year. 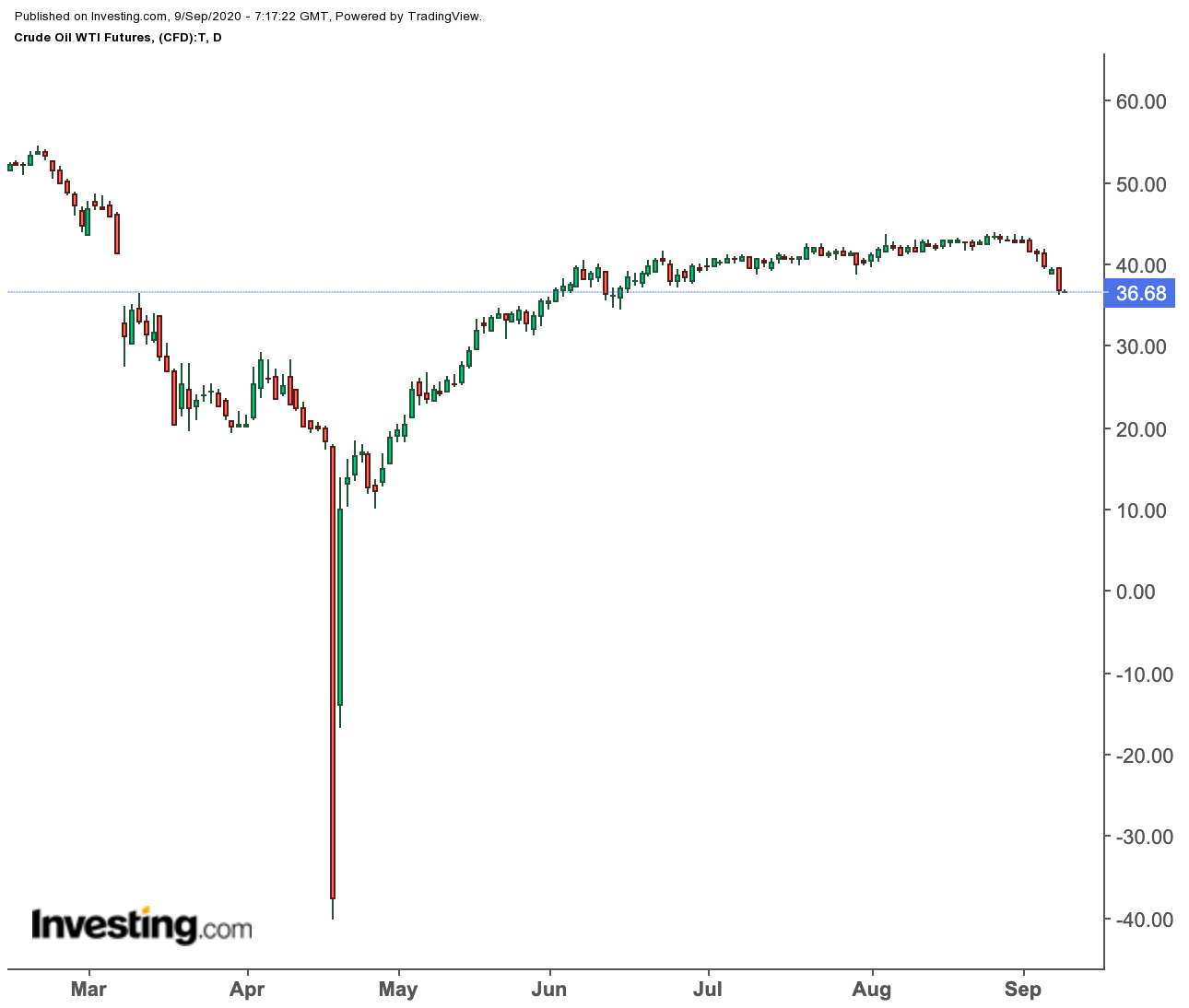 The picture was further distorted by the draw of 38 million barrels of crude over a six-week stretch by U.S. refiners who appeared to be running at full summer steam and were not acknowledging that the restrictions from the pandemic were significantly altering consumers’ behavior.

Tepid U.S. jobs recovery since July — despite unemployment returning to single digit — and a resurgent dollar, added to commodities’ woes and capped crude in the low $40s.

The wheels finally came off the market last week when OPEC kingpin, Saudi Arabia cut the selling price of its oil, ostensibly to preserve or widen its market share. The Saudi move came weeks after OPEC’s global producer alliance called OPEC+ said it was reducing production cuts observed since May.

Those ominous actions were followed by U.S. refiners slashing their crude utilization by 5% in just a week, as the peak summer driving season drew to a close. The return of the Dollar Index to its bullish 93-handle and the stocks rout on Wall Street completed a perfect storm for crude longs.

The question though is has the selloff been exhausted? And if not, how low could it go?

In Wednesday’s Asian trading, U.S. crude’s West Texas Intermediate benchmark clung to the 12-week low of $36.13 it hit in the previous session. With analysts expecting both industry and government data over the next two days to show another million barrels in crude draws for last week, WTI may indeed be on the cusp of a rebound.

But crude chartist James Hyerczyk said in a post on FXEmpire that WTI’s main range was wide, at between $23.26 and $43.78.

Tuesday’s take out of the main bottoms of $39 and $37.56 triggered stop losses that helped accelerate the downside pressure. If the downside momentum looked to test the June 12 bottom of $35.25, it will be followed by a potential breach of the May 28 bottom of $32.66, Hyerczyk wrote.

“The main range is $23.26 to $43.78. Its retracement zone at $33.52 to $31.10 is the primary downside target and value area. It represents 50% to 61.8% of the entire April to August rally so a pullback into this area would offer a great opportunity for new buyers to enter the market in anticipation of an eventual recovery in the global economy.”

Hyerczyk noted that on Tuesday, the market straddled its retracement zone at $38.22 to $36.91. “Trader reaction to this zone should determine the next short-term move.”

“Since the break of the 55 Simple Moving Average there has been a strong move lower past USD 40 per barrel to reach a low of USD 36.43 per barrel. The candles had been diminishing in size leading into the sell-off which suggests the bull run was running out of steam. Having said that, the lacklustre price action lasted longer than some had expected.”

Dhall added that U.S. crude’s Relative Strength Index was extended in the oversold area and the Moving Average Convergence Divergence histogram was in the red, with signal lines crossed under the mid-level.

“The main focus will now be if the price can stop at the 38.2% Fibonacci level which confluences with an old resistance zone from April,” he wrote. “The level has been used a few times other than that so it could be significant in the future as the price plummets.”

Analysts at Bloomberg noted that the three-month time spread for London-traded Brent crude was nearing the widest contango–a situation where the futures price would be above the expected future spot price.

That was an indication that oversupply fears might return to haunt the market, according to Bloomberg.

Rating agency Fitch, meanwhile, raised its 2020 forecast for Brent, while lowering projections for 2020 for the global crude benchmark.

NEW DELHI: Nifty50 snapped a three-day winning streak on Thursday, but managed to defend the crucial support at 15,000 level on a closing basis....
Read more